Flamingos are a unique pink bird that is often depicted in pictures, standing in water with one leg up. They have been depicted as many decorations as well as in numerous paintings. The beautiful, pink bird evolved for a reason.

Flamingos also have the unique feature of having a stronger and larger lower beak and a smaller upper beak. In other bird species, it is the other way around. Flamingos also have a neck that is adapted to allow the bird to bend its head upside down in the water. The upper jaw of the flamingo is not connected to the skull like it is in many other mammals.

A popular part of a flamingo’s diet includes brine shrimp and blue-green algae. They also eat small fish, insects, red algae and diatoms. The diet of the flamingo is to blame for the flamingo’s pink or reddish color. The proteins found in plankton brake down into pigments by enzymes in the flamingo’s liver. The hue of the flamingo’s feather is also an indicator of health and an object of the mating ritual. Although, some flamingo chicks do not fully develop in color until they are 2 or 3 years old. 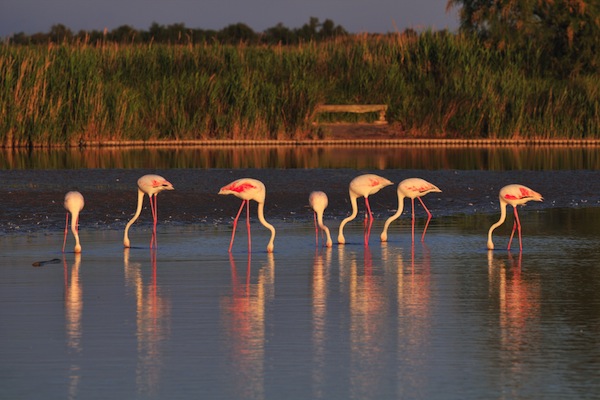 There are two different types of beaks that can be found throughout the six species of flamingos found in the world. They either have a shallow or deep-keeled beak. For example, the Lesser Flamingo has a deep-keeled beak, which allows them to feed mostly on algae. The Andean and James’s Flamingo also share this feature. The Greater, American and Chilean Flamingo have shallow-keeled beaks that allow them to feed mostly on insects, aquatic invertebrates and fish.

Birds Of A Feather

Like the penguin, the flamingo tends to travel in large flocks and stays together in order to avoid predators and encourage the maximum food intake for the entire flock. The flamingo is certainly a social bird and it develops strong bonds with fellow flamingos and their chick.

Flamingo male and female parents share the burden of feeding their young. They also build their nest and defend their egg in unity. They feed the young a kind of crop milk that is produced in the glades that line their upper digestive systems of both male and female. The flamingo shares this feeding feature with other birds like the pigeon and doves that also produce a kind of crop milk for their young. This milk gives the young the necessary fat, protein and red blood cells that allow for proper development. While flamingos intake salt water during the process of feeding, their body must filter out the salt water through their nostrils. Flamingos search for fresh drinking water.