Sometimes the Fin Whale is referred to as the Finback Whale or the Razorback Whale. It is a Baleen Whale. It is extremely fast and can move at a speed faster than any steamship in the ocean.

This is the second largest whale with an overall length of up to 89 feet. They can weigh up to 75 tons. Females are typically from 5% to 10% larger than males. The body is very slender, and that is why it is often referred to as the greyhound of the sea. They feature a ridge that is located on the back behind the dorsal fin. The dorsal fin is about 2 feet tall and it is about 2/3 of the way down the back.

They feature a very large jaw and the lower jaw sticks out beyond the tip of the snout when the mouth is closed. They are dark gray or dark brown in color. The belly is white or cream colored. This is also true of the undersides of the flukes and flippers. The lower right jaw is white and the lower left jaw is black. The head is V shaped

They live in all of the Oceans in the world, and they do migrate. Yet their patterns for migrating aren’t fully understood. It is believed that they migrate based on where they can get food supplies. Those in the South Hemisphere often migrate to find krill and plankton in the summer months. Those in the Northern Hemisphere likely migrate in the winter to give birth in the warmer waters. Yet it doesn’t appear that all members migrate annually.

The Fin Whale lives in waters that range from sub-tropical to polar. They can go into regions that are ice packed and the waters are very cold.

When it comes to socializing, they are believed to be among the most social of all whale species. They tend to form small groups with 6 to 10 members in them. However, during migration they may been seen in groups with up to 250 members. They are very fast, and considered to be one of the fastest of all marine creatures. They don’t dive very deep, but they can stay under water for up to 15 minutes before they come to the surface for air. They do use vocalizations, but they are at a very low frequency. 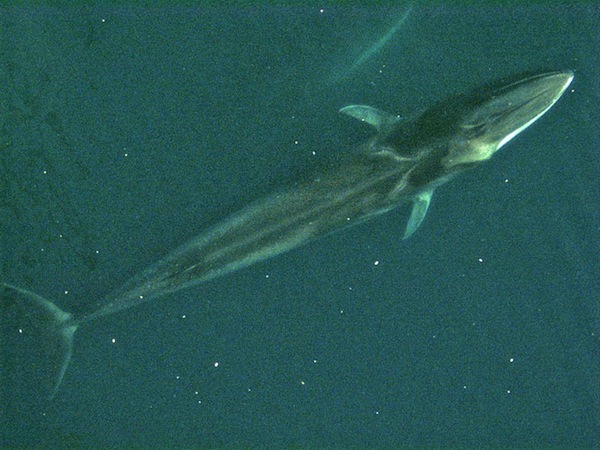 Krill, small schools of fish, and small squid make up the majority of the diet for the Fin Whale. Underneath the body of the Fin Whale are 85 bentral grooves that go along the underside of the body. There are approximately 350 to 400 baleen plates found in the mouth. They are able to take in large amounts of water and it is expelled while they keep the food sources.

During the winter months, they are likely to fast for a period of time as they migrate to find food. They rely on the layers of fat called blubber that they have stored to help them survive during this period of time when they aren’t taking in food.

There is very little information known about the mating rituals of the Fin Whales. It is believed that the males will emit low frequency sounds to the females and chase her while doing so for a period of time before mating.

The males re ready to mate around 6 to 10  years and for the females it ranges from 7 to 12 years. After mating, it takes from 11 to 12 months for the calf to be born. They are usually born in the winter months in a sub-tropical or tropical area. They can be up to 18 feet long and weigh from 4,000 to 6,000 pounds at birth.

Mating occurs in the late fall or early winter. A female will give birth every 2 or 3 years. The young will consume milk that the mother’s body produces for approximately the first 8 months of life. Their estimated lifespan can be from 80 to 90 years.

It is believed from 1904 until 1979 at least 750,000 Fin Whales were killed due to whaling. With protection in place, that number is now drastically less even though illegal killing still occurs. Their current population isn’t known and they are rarely seen in the Southern Hemisphere. Most of the remaining population is around the North Atlantic Ocean.

It is believed that the increased noise in the bodies of water have been a factor for these whales to contend with. Since their frequency is so low for communication, it can prevent them from successfully receiving the signals that are sent from other Fin Whales. Many of the experts worry that the interruption in communication could hinder males and females finding each other for mating.