Feline anatomy varies relatively greatly from species to species, as do so many things that concern the cat family. Of course, there are some consistencies – some physiological and anatomical similarities that mark an animal out as being a member of the Felidae family. This article outlines the most basic of those consistencies.

By and large, felids have lithe, flexible bodies, well-adapted for stalking, leaping, running and climbing. Their limbs are muscular and relatively long in comparison to the height of their bodies, and their tails are generally somewhere between a third and a half of their body length. There are exceptions to this rule, however; the tail of the clouded leopard is a little longer than that, and the tail of the bobcat significantly shorter. They have paws with soft pads containing the sweat glands in their bodies, and retractable claws. (The one exception to this is the cheetah, whose claws are semi-retract.)

Their fur is extremely variable, from the thick coats of the arctic cats to the almost-invisible furring of some domestic breeds. There is an enormous variation in coat colour and pattern, and almost all species occasionally produce ‘melanistic’ individuals – cats with an all-black coat. Melanistic jaguars are often called ‘panthers’.

Other variation are possible – any species of mammal can occasionally produce an individual with albinism, and certain species have coat markings that vary relatively widely from cat to cat. The pelage of tigers in particular is never identical from one individual to another – a tiger’s stripes are as unique as a fingerprint, and no two will ever be quite the same. 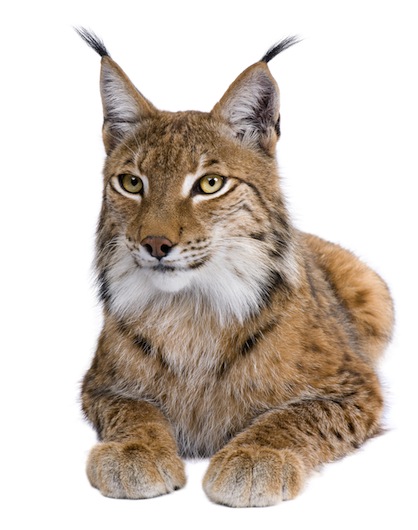 A cat in the wild is only as good as its senses, and as such many are highly-developed. Their eyes, for example, give them amongst the best night vision seen in any mammal – they are reflective, meaning that they shine distinctively at night and allow the cat to see in far lower light conditions than would otherwise be the case. The eyes of felids are constructed almost entirely to enable them to have some of the best low-light vision of all mammals, and as such other significant aspects of their vision suffer – cats have limited colour perception, for example, and cannot distinguish shades of colour or fine details.

A cat’s ears are generally quite large, and can usually hear sounds at an extremely high frequency. Smaller cats have a great deal of control over their ears, with some having several muscles dedicated to bending their hearing toward their prey. The caracal is an example of a cat who hunts largely through aural signals, and will sometimes pause in utter stillness to determine exactly which direction to stalk in for the best chance of succeeding in the hunt.

While a cat’s sense of smell is nothing compared to that of a dog, they still experience a great deal of the world through their noses. This highly-developed sense of smell does not, however, correspond with an equally sensitive sense of taste – cats cannot taste sweetness, and have very limited tastebuds. Their tongues are largely devoted to a large number of ‘papillae’, which give them their sandpapery feel and are of great use for maintaining good hygiene.

Cats have one extra field of sensory input than humans – their whiskers provide them with a great deal of information about space, distance, speed and the movement of the air around them. They are invaluable both for nocturnal hunting and for allowing the feline to judge width and depth. 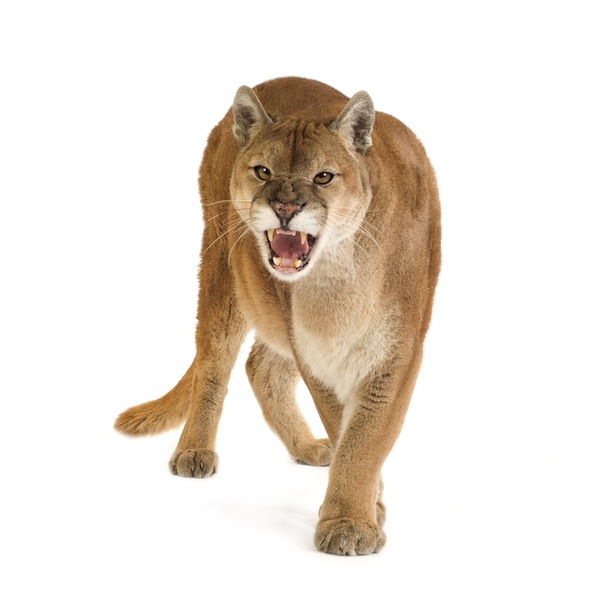 Due to their short muzzles and well-developed jaws, cats have relatively few teeth. Those that they do possess, however, are sharp – and, in the case of the clouded leopard and a few others, incredibly large in comparison to the size of the mouth and gum bones. Their teeth are designed to cut and tear, and as obligate carnivores they have no need of the flat molars that herbivores and omnivores use to chew vegetation. All felids have jaws that move only vertically, helping them to keep a firm hold on struggling prey but hindering their ability to chew. This means that the sharp teeth at the front of their mouths are even more vital – it is these that enable the cat to reduce its prey to bite-sized chunks that it can easily consume.

The largest variation in feline vocalisations, of course, is that between the big cats and the small cats – big cats have an extra element in their throats that allows them to roar magnificently, but the lack of this in small cats means that they can purr without pausing for breath, continuing the noise through both inhalation and exhalation without interruption.

Other than that, most cats make the same kinds of noises. They spit, hiss, growl, snarl and mew; some also make gurgling and ‘calling’ noises. It’s suspected that some cats can produce sounds outside of the range of human hearing, and experts think it likely that these noises are a large part of the way that smaller cats communicate with each other.