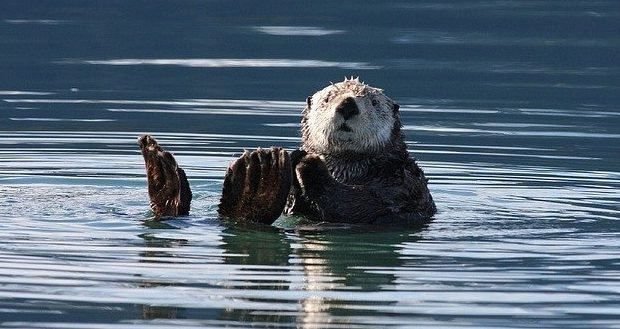 The behavioral patterns of sea otters are quite unique in terms of their family and social structures. Although they are independent creatures in terms of foraging for food, they are known for living highly interactive lifestyles. It is not uncommon to find a pair of sea otters casually holding hands and relaxing in the open waters. Although they are a very interactive species, sea otters prefer to spend the majority of their time alone and are self-sustaining. Adults do not rely on others for their own survival.

Sea otters practice a polygynous lifestyle, meaning that males tend to have multiple female companions. Female sea otters begin bearing pups around the age of four or five years old. Upon mating, a male and female sea otter will often spend several days together in isolation to bond with one another. Their mating behavior is often violent, leaving many scarred due to aggressive biting particularly on the nose and facial region. Other than during mating rituals, sea otters are normally non-violent creatures except for very rare occurrences. Although sea otters normally have only one pup at a time, twins are considered rare. It is extremely unlikely that both pups will survive to adulthood when a mother gives birth to twins.

Socially, males and females form large groups separated in terms of sex. These groups, also known as rafts, have been known to contain up to around 100 otters at a time. Even though females significantly outnumber males, male rafts are often larger than those of their female counterparts. Males often guard and protect their designated territories against other males during certain seasons, while females are seen roaming freely among rafts regardless of sex. During the breeding season, males will swim through female rafts in order to find a mate.

Mothers are exceedingly protective and form strong bonds with their young. After birth, mothers have been observed licking their babies for several hours. Depending on the general region of the species, nursing typically lasts up to twelve months. The mother must teach her pup how to swim and hunt for food on her own. The more experienced the mother is, the more likely the pup is to survive against a high mortality rate.

It is estimated that only one in four sea otters will survive past the first year of life. Mothers offer guidance to their young and are often seen embracing one another closely. Sea otters are normally self-efficient by eight months old, and in some unfortunate cases, the mother is forced to abandon the baby if she can no longer provide for it. In other cases where food is abundant, the mother may nurse until it is an adult. It is immensely uncommon for a mother to abandon her baby for no reason, even in adulthood, due to their tight bond with one another.

Females are primarily tasked with raising their young, rather than males. Males often stay away from their babies and are uninvolved throughout its life. Mother sea otters are known for being highly devoted parents, constantly caring for their babies. In many cases, mothers may even adopt other baby otters and raise them themselves. Mothers are often seen cradling and grooming their young on their bellies while floating in the water. They are tasked with keeping their babies warm because they are highly susceptible to the cold at this age. Sea otters do not have a protective layer of blubber like many marine mammals. Even though their fur is heavy and insulated, they often hug one another to share warmth, particularly mothers and their young.

Mothers have been witnessed taking precautionary measures when leaving their babies unattended. It is common practice for mothers to wrap their young in kelp to prevent them from floating away or drowning when leaving to forage for food. Mothers form deep attachments to their young, some even carry their young for several days after premature death.