Otters are fun creatures to watch and they are highly intelligent. Most of us don’t know much about them so here are some facts to help you educate yourself about them. It can be fun to test out your knowledge as you go.

Otters consume mainly fish but many people think that they eat plants and berries. They are definitely meat eaters.

Male Otters are called boars, females are sows, and the offspring are pups.

The Sea Otter is the only species that have a shorter and less muscular tail. The others use it as a powerful weapon and to navigate their movements in the water.

Otters spend the majority of their time on land but many people assume that they spend it in the water. The exception is the Sea Otter which does spend almost all of its time in the water. 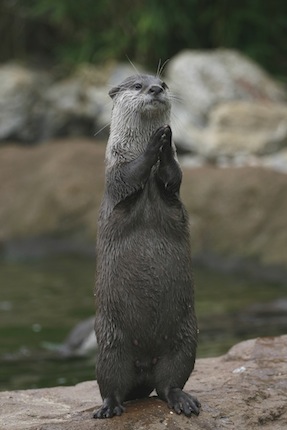 There are 13 different species of Otters found in the world. There is evidence that they have been around for more than 5 million years.

Antarctica and Australia are the only two places in the world where they aren’t found. While they tend to live in the cooler waters, they have been known to reside where the water is warmer and the land is sandy.

Otters are very closely related to badgers, ferrets and mink. They aren’t related to the beaver but they are often mistaken for them. They are also distant cousins of the skunk.

They have the ability to create and use tools just like beavers, monkeys, and apes.

The average life span for an Otter is 10 years. That can double though with one in captivity.

Otters can have a tail that is a foot long. It helps to protect them as well as to help them steer through the water. Generally the tail will make up about one third of the body.

An Otter can remain under water for up to 4 minutes. They can also dive up to 300 feet in search of food.

Otters love to sunbath during the day and they are very active at night.

Humans are the main predator of Otters due to hunting for their pelts.

Otters are believed to be one of the most skilled creatures in the world.

They are they only known marine animals that don’t have blubber. They have their fur instead to keep them warm.

It can be hard to tell the pups from the mothers because the pups can be almost as long a their mothers at birth. Those that don’t know the males and females stay separated often assume this is a couple rather than a mother and a pup.

There are some great photos of Otters engaging in human behaviors including holding hands.

As you can see there is plenty of information out there about Otters. If you want to pursue more about them, consider reading about their characteristics, habitat, and feeding habits. You can also learn information that is specific to the various species of Otters out there. They are definitely amazing creatures with plenty to teach us about life, fun, and survival.