The name of the Erect- Crest Penguin stems from the fact that they have yellow plumes above the eyes that are erect. They are a graceful and elegant looking penguin that most people are quite fascinated by. Due to the remote locations where they live, they have very little interaction with humans in the wild.

This species of penguin is medium sized. They are black with white on the belly and then the yellow over the eyes. They have the classic tuxedo look that so many people associate with penguins. They range in size from 20 to 28 inches tall. They can weigh from 5 to 13 pounds. The males are just a bit larger than the females.

They feature a break that is long and slender, with a brown and orange coloring. The tongue and back of the mouth have spiny elements that allow them to swallow their food sources whole. They have a short tail that helps them to navigate on land and in the water. The legs are far back so that they can be upright on land. They are able to hop and to jump along the difficult terrain.

You will find the Erect-Crested Penguin living in New Zealand and along the coast of Australia. They migrate to various islands for mating. During the winter they spend a great deal of time in the sub Antarctic Ocean zone. Where they go though continues to be unknown to researchers. Overall population is believed to be between 130,000 and 140,000 but it is hard to get a good overall number due to their movements.

They will move around too when they need to find more food. Their overall distribution has changed over time due to various times of the year when they can find more food than others. They are highly intelligent and adaptable to their environment.

There is a great deal of mystery still that surrounds the behaviors of the Erect-Crested Penguins. What is known is that they are highly social just like all other species of penguins. They live in very large colonies and engage in communicating through vocalization and through touching. Social activity is a big part of feeling safe and offering protection. 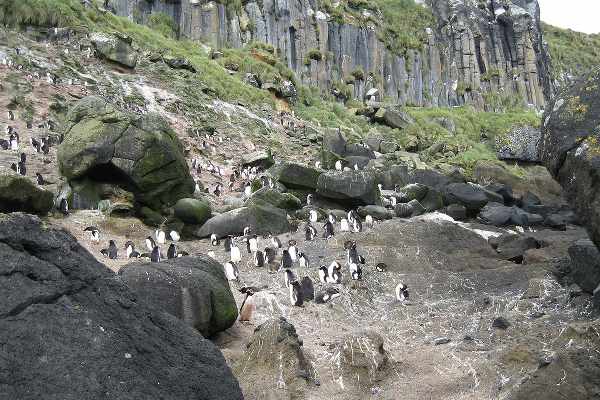 Small fish, krill, and squid make up the diet for the Erect-Crested Penguins. They are able to dive very deep when they need to in order to find enough food. They consume as much as they can to help them store up fat. During mating and molting, they will fast so they rely on that fat for overall survival.

They are opportunistic and going to take advantage when they find large schools of small fish that they can consume. Even though they are seen feeding alone, they usually have at least five or so in any given area. Very seldom will you see one of these penguins completely alone in the water.

This penguin species is migrational, and they take part in mating in Antipodes Islands and Bounty Islands. The mating rituals involve the males displaying themselves and making a variety of sounds. The females decide who they will mate with. It isn’t known if they will mate with the same partner annually, but it is speculated that they do so.

Once a couple is paired up, they will engage in mimicking each other. After mating the males will head back to the site for the nest. The females come about two weeks later and help finish it up. Mud, stone, and grass are used to create them. They work hard to create a sturdy nest that will last.

Nests are created in rocky terrain locations. Such a location can be very tough for predators or humans to reach. There is little vegetation in these areas and only very short shrubs and grasses so there isn’t really much life out there to be in the way and disturb these nests. In the early part of October, the female will lay two eggs in the nest. The first egg though is smaller and usually lost before it can hatch.

The second egg is usually twice the size of the first one. The pair will take turns incubating it over the next 35 days. Once the young are born, the female it food until around mid-February. The male fasts during this time frame and stays with the young to offer protection. He will then have to go to the water to feed if he is going to survive. The young are able to go to the water and find their own food once their juvenile plumage is gone.