Facts and Information About Elephants

There are now only two genus extant in the Elephantidae family, but this was not always the case. In the prehistoric era, there were several more – including mastodons and mammoths, each of which was rather larger than the modern elephant. We have some thousands of skeletons of these creatures, and it’s commonly theorised that it may be possible to resurrect the mammoth species via cloning – we do, after all, have access to mammoth DNA frozen and preserved in block of ice.

Elephants have the longest pregnancies of any mammal, with some lasting anything up to nearly two years. It’s thought this is largely because they need to be tall enough to reach their mother’s underside to suckle and feed – but it also means that they’re a lot less helpless at birth than most newborn mammals. They can keep up with the herd from just a few days old, and are able to stand and take a few steps from the moment they’re born. 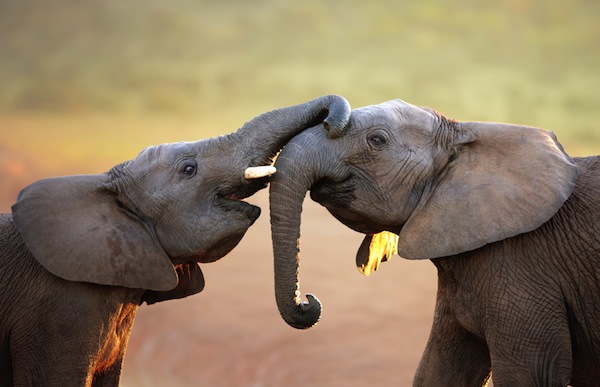 There is significant evidence that elephants are descended from aquatic mammals, largely because of the particular composition of their lungs. Whether this theory is correct or not, it’s definitely the case that their closest evolutionary relatives are the sea cows – manatees, dugongs and other creatures of that ilk. It may alternatively be that they both evolved from an amphibious mammal of a type we no longer have or know anything very much about.

An elephant’s mouth contains 26 teeth – 12 premolars, 12 molars and their tusks designed for tearing, chewing and crushing the massive plant matter that makes up their diet. Unlike most mammals, they don’t have ‘milk teeth’ and ‘adult teeth’ – rather, their teeth fall out anything up to six times over the course of their lives and grow back again in a cyclical fashion. After the seventh falling out they don’t tend to grow back at all, meaning that elderly elephants quite often die of starvation from not being able to feed themselves sufficiently well.

Despite their massive size, elephants can walk almost noiselessly. The soft padding on the underside of their feet absorbs the noise, and even when moving quite swiftly they can maintain relative quiet. They cannot, however, run – ‘running’ has a technical definition involving having all feet off the ground simultaneously, and an elephant’s bulk renders them incapable of this. Their maximum speed is something around 18 mph. 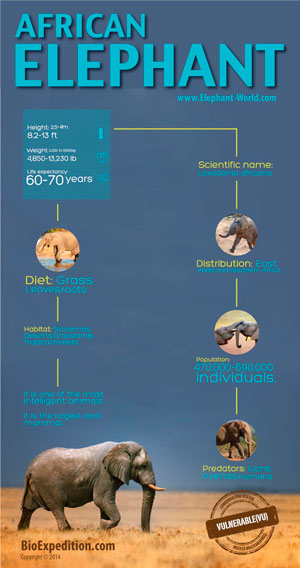 One of the many methods of communication used by elephants is infrasound – which they emit from a membrane in their forehead, right at the join of their trunk and skull. They use this to communicate over great distances, to enable them to meet up at a set location or co-ordinate mating and copulation. It also explains how it is that herds of elephants far apart sometimes seem to move in a co-ordinated fashion.

Elephants have individual voices, just like humans – which sets them apart from the vast majority of animals, who sound almost identical to any ears. Humans can learn to tell the difference between these timbres nearly as well as elephants can. Predictably, the voices of cows and calves are generally softer and higher than those of bulls.

In just the same way as human children, baby elephants must be taught and socialised by those around them in order to grow into helpful members of elephant society. Orphaned elephants usually turn into ‘delinquents’ – but to prevent this, any herd who finds an orphaned calf will adopt it and raise it as their own. Even bull elephants will take on abandoned calves for a time, at least until they have shepherded them toward a matriarchal herd who will accept them as a member.

These delinquents can be remarkably destructive. Two specimens studied in a reserve in South Africa attacked numerous humans, killing two. They also killed 39 white rhinos. This is not at all typical elephant behaviour – they are almost always very gentle unless provoked. Thankfully, when placed with a bull elephant who was older, larger, tougher and properly raised, they responded to his authority and teaching and over time became safe to interact with and be around.

The trunk is an astonishing piece of evolutionary design. It can be used as a snorkel, or a shower, or a limb, or a hand. It has two prehensile ‘fingers’ and can be used to pluck a single berry from a twig unscathed, or pick a coin up from the ground – or tear an adult tree bodily from its roots. It contains more than forty thousand muscles, and is used for everything: for caressing a calf or hurling an enemy hundreds of feet. They also make trumpeting sounds, flick away flies, and communicate various body language messages to other elephants. Elephants even ‘hug’ with their trunks – twining them together in a surprisingly touching scene.