Birth and Care of Young

When a female elephant (or ‘cow’) is ready to mate – which can happen at any time of year and under any circumstances – she sends out an infrasonic signal that is heard by males (or ‘bulls’) up to many tens of miles away. Upon receiving this signal, they begin to travel toward it; this can take a day or two, but thankfully elephants have no breeding season and can remain fertile for a relatively long period of time.

When they arrive, they will fight. These fights look rather fierce from the outside, with clashing tusks and deafening trumpets and rampaging bulk, but really they’re almost entirely for show: it is relatively rare for a bull to actually become injured during one of these fights, and they are amongst the most gentle courtship battles ever observed in nature.

What is most interesting is what happens next, though. Usually, the cow will then approach the winner and rub her body affectionately up against his, thereby accepting him as a mate. If she does not do this, however, the rejected victor simply leaves and the remaining elephants fight again – continuing the process until a pairing has been made that suits the cow. Once the decision is made, the other males go back to their own ranges and the winners copulate.

Once the mating is complete, the bull usually remains with the herd for a few hours to eat and socialise before himself returning to his usual haunts. A bull who stays with a matriarchal herd for longer after mating is rare, but they have been observed occasionally in safari parks and wildlife ranges.

Elephants have the longest gestation period in nature, and carry their young inside them for nearly two full years. During this time, they are mostly able to carry out their usual tasks and duties without interruption – though there is some evidence that a herd will travel with a pregnant cow in the middle, to protect her from anything that might think they can take advantage of her reduced speed and agility. 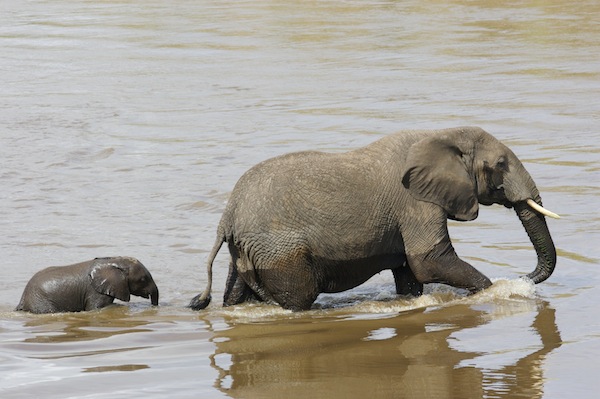 African Elephant with her calf

All mammals have painful births, and elephants are no exception. They manage better than some, however; they rarely die during childbirth. While a cow is labouring, the other elephants in her herd tend to gather around her and touch or caress her gently with their trunks.

It’s almost unheard of for more than one calf to be born at a time, and this newborn calf can immediately stand up under his or her own power and walk a few faltering steps on its not so little feet. Even newborn, the calf will weigh something in the region of 260 lbs. They need to be this large for good reason, however; elephants are tall animals, and babies need to be able to reach their mother to feed on milk.

The life cycle of an elephant is actually remarkably similar to that of a human, in some ways. The calf will begin to eat some solid food at about six months of age, but will continue to supplement their diet with mother’s milk till somewhere between the ages of two and three.

From just a few days old, the calf will be able to walk well enough to keep up with the herd on their travels. They are kept to the middle of the group, however – to protect them from potential predators, who are generally far more interested in a calf than they ever would be in an adult elephant. 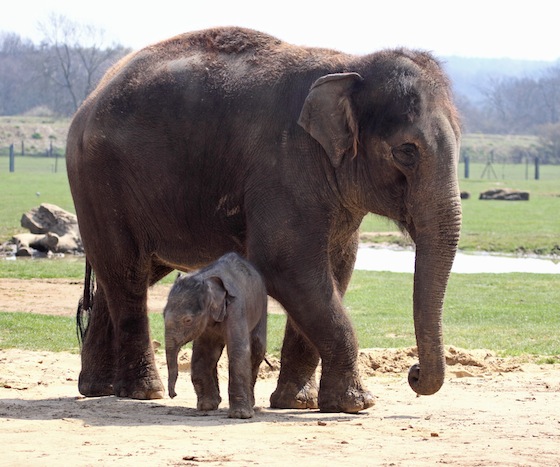 Asian Elephant and their newborn

Sometime between the ages of eight and twelve, young elephants begin to diverge according to sex. Juvenile cows will remain with the herd, usually all their lives – and by the age of 15 they have usually made their first mating call and begun their own reproductive life. Young bulls, on the other hand, almost always leave the herd – sometimes reluctantly. If they have brothers or know of other calves departing for pastures new at this time, they will usually join together and form a ‘bachelor herd’ for a while. These herds are not usually lifelong, and eventually almost all bulls become solitary and spend much of their time alone.

It is often not until the elephants reach this stage in their lives that their mother will mate again, though some choose to reproduce once more sooner than this. They never copulate before their calf is fully weaned, however.