Really, elephants can live anywhere that provides them with adequate food and water for their needs. They do need to have plenty of room to roam in, however, and as social animals they don’t deal well with being isolated for long periods of time. It seems that they are easily intelligent enough to suffer from psychological complaints and mental illnesses, and have been known to develop symptoms of outright insanity when kept in poor conditions by human captors. Thankfully, with proper care this is relatively easy to avoid; the presence of another elephant is a great help, and frequent exercise plus plenty of interaction with human keepers is sufficient to allow the elephant to maintain good mental and physical health. As a result, many countries have strict regulations on the conditions in which elephants in captivity are to be kept.

Some elephants live in tropical forests, enjoying a steady temperature throughout the year and experiencing varied but unpredictable levels of rainfall. Dry forests are also habitable to them, just so long as they are close to several sources of plentiful fresh water. Woodlands, distinguished by their open canopies and streams of sunlight, are good places for many elephants – particularly as they boast a massive variety of plant life to enjoy. It is very much not the case, however, that elephants only live in heavily wooded lush areas. Savannahs – characterised by scattered clumps of trees and heavy rainfall – and grasslands that suffer from a lack of diversity in some cases and occasional bushfires both play host to populations of elephants. There are Asian elephants who live in mountain terrain, and others that make their home in areas of near desert. 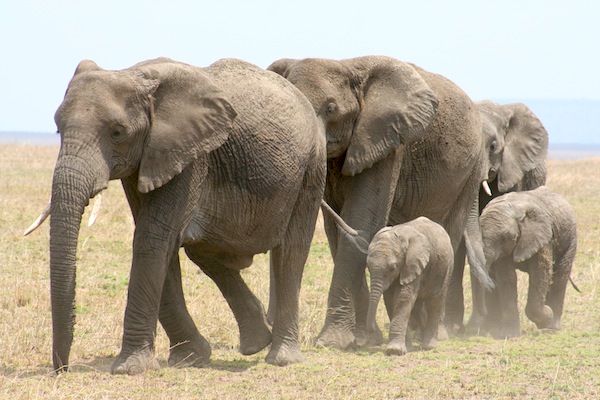 Perhaps surprisingly, all elephants are migratory creatures – no matter what their habitat. They tend to spend halves of the year in different areas, which in seasonal climates allows them to be always where the best food is (bark and wood in the dry or cold seasons and fresh shoots and foliage in the wet or warm parts of the year) and no matter what their climate gives time for their previous ranges to recuperate. Elephants really do eat a very large amount, and plant life needs those crucial six months to recover. These habits also fuel the ecological diversity of the places elephants inhabit, and allow them to use their dung to spread seeds and germinate plants over a large area.

These factors all mean that elephants are able to survive in several places all sorts of places, and it’s this diversity and adaptability that has helped them to hang on as a collection of species for as long as they have. Human hunting, poaching and slaughter of elephants has been an incredibly serious problem, and as animals with no other natural predators we are as a species single-handedly to blame for the impending extinction of these animals. Human destruction of elephant habitat is a serious problem, and all over Asia and Africa elephants have been driven out of their ancestral homes to make way for new developments, towns and transportation routes.

Thankfully, many modern conservation groups are taking excellent steps to halt this decline and hope to reverse the vulnerability that humans have wrought upon these creatures. Elephants respond well to conservation efforts, breed plentifully in captivity and are perfectly happy to live alongside humans just so long as those humans do not attempt to slaughter them in tremendous volume. It’s hoped that we may now be on the way to repairing some of the damage we have caused, though ivory trading is still a problem – its illegality has not prevented some poachers from killing elephants for their tusks nonetheless. With gentle care and worthwhile assistance, it should be possible to restore the elephants to something resembling their former success as a species. In some places, though, this will require a cultural shift – not least in the ivory trade. While harvesting ivory is now illegal, antique ivory trinkets still fetch such tremendous prices that some poachers are encouraged to kill animals for their tusks, turn those tusks into new pieces, and pass them off as ‘antiques’ in order to reap the rewards.