Sometimes, the Dusky Dolphin is referred to as the Fitzroy’s Dolphin which is the name that Charles Darwin gave them. They are a close relative to the Pacific White Sided Dolphin. In fact, it took a great deal of information and DNA for scientists to separate them into different classifications.

The Dusky Dolphin is small in size with a length ranging from 6 to 6 ½ feet. They weigh anywhere from 150 to 187 pounds. They are distinct from other dolphin species in their body design. They have a small head that is even and they don’t have a beak at the end of their snout. The color is black or dark blue on the back and on the fluke. They have a dark bank that runs to the fluke and along the flanks in a diagonal pattern. They have a dark coloring on the snout and lower part of the jaw with white on the belly.

From the flipper to the eye there is a dark gray color. They also have stripes of white or cream that go from the fluke to the dorsal fin. The dorsal fin on the male is curved more than what you will find on a female. It can be hard to tell the gender from the size though as they tend to be very similar for this species of dolphin.

Both the lower and upper jaw of the Dusky Dolphin feature teeth. There isn’t the same number of pairs though in the lower and upper areas. What you will find is that the lower jaw features two more sets than the upper jaw. There can be from 24 to 36 total pairs and they are going to be pointed as well as very small.

The most common location where this dolphin is found is around New Zealand and then regions to the South of Australia. They are also found to the West of South America, in Tasmania, and in Africa but in smaller populations. These dolphins tend to stay close to continental shelves and around the slopes. They like the warmer temperatures but they sometimes live in cooler areas if they must for habitat and for food.

This is one of the most social dolphin species out there, and they can form very large pods. Some of them have over 1,000 members but most of them have from 20 to 500 in them. The larger pods can be the result of movement of the dolphins in order to find enough food or when they need to move to locations that offer warmer waters. They have a very detailed level of hierarchy within the pods. For the larger pods, there are several sub units that co-exist inside of it.

Many people love to see these dolphins when they leap out of the water or they are tumbling in the air. They don’t get scared around humans and will come close enough to boats in the water to bow ride. They often take part in their acrobatics in groups as it is a common part of their overall socialization.

The Dusky Dolphin is a very quick swimmer and they are playful with those actions too, often chasing each other around in the waters. They use a variety of methods to be able to effectively communicate with each other. This includes squeaks, clicks, whistles, and squeals. They can be heard about 2 miles away when they are in the air! 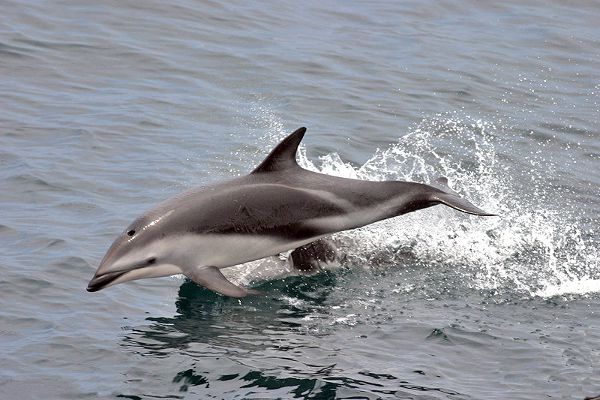 Shrimp, fish, anchovy, and squid make up the diet for these dolphins. They often feed during the day but have been seen eating at night too. They work as a team of many dolphins to round up the food. They have the ability to dine from the bottom of the water as well as from the surface of it. Sometimes, there can be as many as 300 dolphins working to get food at the same time. They use their communication skills, echolocation, and a variety of strategies to ensure they are successful.

During the spring, these dolphins may participate in mating. This can be a time when the males become more aggressive so that they can mate over other males. The age for mating depends on overall size rather than age. It also depends on water temperature, food availability, and stress.

Once it has been completed, the female will carry the young in her body for the next 11 months. The young will be born in the shallow waters so that they can rest as can their mother. They will learn to hunt for food around 6 to 8 months of age but can continue to nursery until they are about 18 months old. 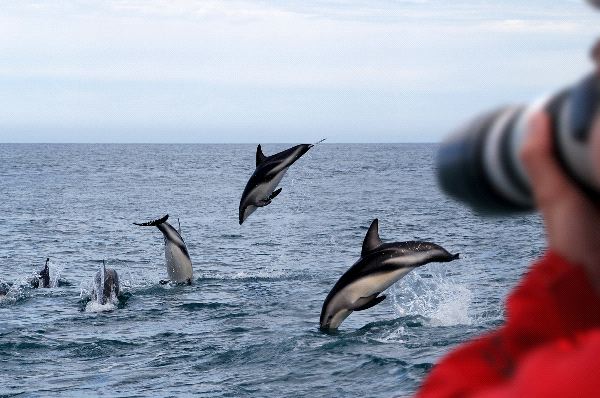 The number of Dusky Dolphins that remain in the wild is hard to get a good count of. However, it is important to protect them due to problems including fishing nets and illegal hunting. The efforts in place help to reduce the risk of fishing equipment injuring or killing these dolphins. Efforts to enforce laws to prevent hunting for meat continue as well. Peru has a huge problem with this though even though since 1996 hunting these dolphins has been against the law.

Lots of tourists come to the various locations around New Zealand to see the Dusky Dolphins. There have been some studies to see if this is causing too much stress for them. It doesn’t appear that it does and the tourism can be a driving force to educate and to raise money for helping the dolphins to survive. It isn’t believed their numbers are drastically low, but efforts to prevent them from getting to that point are very important.

Efforts to clean up the water to prevent further pollution is a part of that strategy. Identifying locations of the Dusky Dolphins also helps to create limits regarding where boats are able to go in the water. The risk of these dolphins being injured or killed by them is a factor to look closely at.