The Dromedary is a species of Camel that features one hump on its body. They are very large animals. The ancient Egyptians were very fond of this animal. They drew pictures and symbols with it. Many believe that this animal helped them with carrying supplies so that the great pyramids could be created.

The Dromedary is light to dark brown with a coat that is medium in thickness. This helps to prevent them from getting too hot in the dessert sun. They have very long tongues that they use for eating and for smelling. They have legs that are long and powerful. They also have small ears and very long eyelashes.

Their bodies rarely sweat and that is why even in the harsh heat of the desert they are able to do well without getting exhausted or needing to drink water very often. They can weigh over 1,520 pounds and they can be up to 6 feet tall. The males weigh more and they are taller than the females. The move with both legs on the same side at one time.

It is believed that the Dromedary is native of the Arabian Peninsula. Today they are widely found around The Middle East and North Africa. They have been widely domesticated in order for people to use them as transportation for themselves and for their goods. There are believed to be about 13 million of them in the world.

The Dromedary have been trained to kneel down for people to get on and off of them. However, even those that are considered to be domesticated for such purposes can be bad tempered. They can throw people off, refuse to move, and they are spitters. They are widely used because they can travel long distances without getting tired, carry heavy loads, and they don’t need very much water to survive. 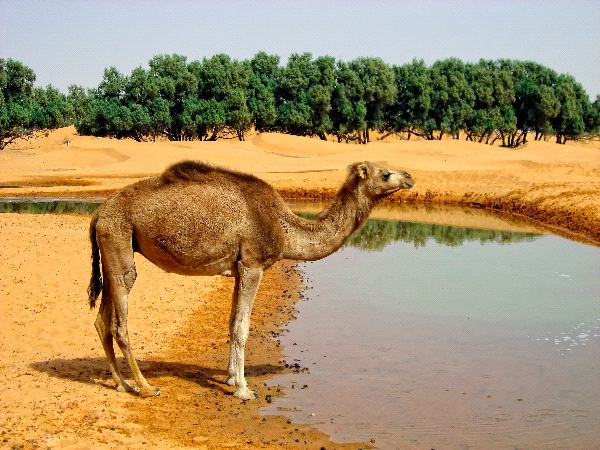 Even though they can go weeks without water, they can drink up to 30 gallons of water in 13 minutes! They are herbivores and will eat all types of plant life. Due to their height and body design they can eat low on the ground, from bushes, and from higher up trees. They tend to only eat small amounts from a single location though. This helps to ensure that the vegetation can come back.

They can eat thorns off of the Acacia tree as well. This is a type of food supply that other types of animals simply can’t consume due to the thick thorns. The body of the Dromedary though is able to consume it and to properly digest it. They may forge for food up to 12 hours a day. In captivity or those that are domesticated often get hay and grain. Sometimes various supplements are added to help them stay strong and to boost the immune system.

The age of maturity is about 3 for females and 6 for Dromedary males. The males are very aggressive when it comes to mating. They will fight with each other for the right. This can mean a male that is of age to mate won’t be able to if he isn’t strong enough to win. The males will force females to mate if they are stronger so there are often fights that engage between the two genders.

The gestation period is typically 15 months. They will have a single youngster that they will take care of for a couple of years. They won’t mate again until their young has been weaned. They can live up to 50 years in the wild. However, some that are worked too much will have a shorter life span. 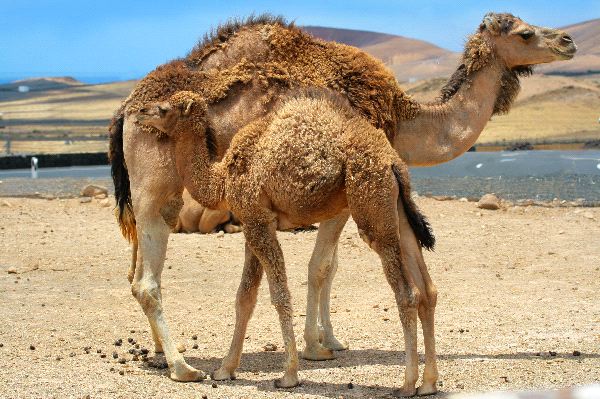