Dolphins are phenomenal in their level of bonding and interaction between each other. What is also fascinating is that they have forged a similar relationship on various levels with humans. This has been observed taking place in the wild as well as when the dolphins are in captivity. There are many examples to explore what has taken place.

Wild dolphins have been seen helping commercial fishing boats to round up what they are looking for. The dolphins will circle around a large school of fish and then the fishermen are able to put their nets in that given location. The dolphins get the remaining fish that escape the nets. Dolphins are known to follow around boats and divers. They have rescued them at times too when they are having problems in the water which is very remarkable.

There is more interaction among dolphins and humans in captivity than in the wild. This type of interaction allows humans to find out more about the overall intelligence and behaviors of dolphins. They have also been identified with unique personalities. There is more going on though with such interactions than just dolphins learning how to perform tricks for shows.

One of the programs involves dolphins assisting humans that need therapy – both emotional and physical. It is believed that the dolphins can also help with healing when someone has gone through a trauma or they are struggling with some type of disability. There have been programs to help those with mild or moderate depression through interactions with dolphins. However, it hasn’t been determined that it works better than such therapy with other animals such as dogs or cats which is more accessible and less costly. 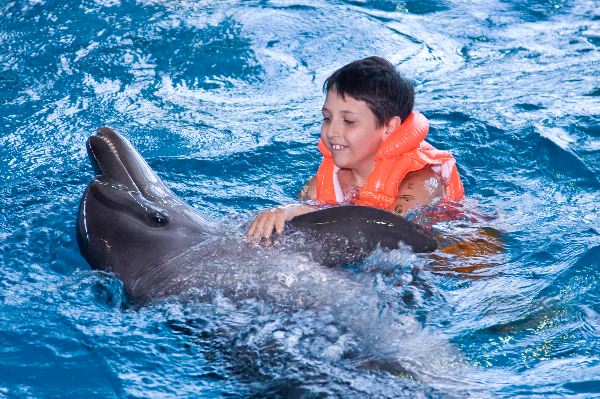 Boy Swimming With a Dolphin

The military has used dolphins for assisting them in the water when it comes to various operations. This includes finding mines and finding people when rescues are under way. The United States Navy Mammal Program includes dolphins in water emergency team efforts. Russia used to have a similar program but they discontinued it.

With all that dolphins have done to help humans, it is no doubt they are well liked by most. This isn’t a recent endeavor though as there are signs from early ancient times that indicate that they were also a big part of those cultures. This includes various art work that shows that the dolphins were believed to be a connection of humans and the gods to be highly regarded.

To offer additional help with interacting with dolphins, some studies have tried to identify what the various whistles and clicks mean from dolphins. The program started in the 1960s and thousands of these vocalizations were recorded. However, it was soon found that it was going to prove to be very difficult to replicate such sounds to communicate with dolphins. It was also determined that different dolphin pods had various dialects.

So how do humans communicate with dolphins? It occurs through touch, words, hand singles, and more. It often depends on what the dolphin responds well to personally as they can be very different from each other.

Unfortunately, not everyone likes they dolphins for the same reasons. For example, there are places out where consuming the meat from dolphins is a common practice. Japan and Peru are two locations where it occurs quite often. The meat can be consumed raw or cooked depending on the preference of the consumer and what type of dish they want to create from it.

There have also been some dolphins that attacked and killed humans. While they are usually very approachable that isn’t always the case and they can be aggressive when it comes to too much stress, protecting their pod, and more. When this does occur, it is highly publicized and reminds people that dolphins are still wild animals.

In 2010 one of the dolphins at SeaWorld, Tilikum, killed his trainer. When there was a further investigation into this matter, it was determined this was the third person that the dolphin had killed. This is certainly unusual and not what you will normally find from any dolphin. 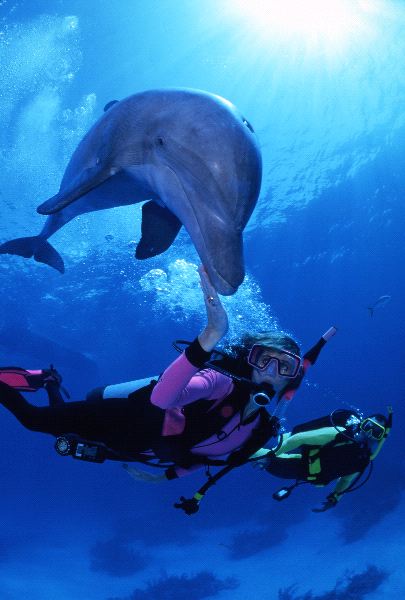 The Orca is the largest of all the dolphin species, and they have been known to attack people the most. There have been few other types of dolphins involved in such events. One of them happened in 1994 and involved a Bottlenose Dolphin. A man in Brazil was killed in this incident but there are reports that the dolphin had been continually harassed over time by humans.

There are two different sides seen to dolphins and it does open up the eyes to what can occur. Dolphins are fascinating and their interactions with humans can be amazing. If you are in the water and see a dolphin though you may want to keep your distance so that you aren’t at risk of something harmful occurring. Observing them from a distance allows them to thrive and humans to have a great story to tell!