Just about everyone out there knows about dolphins and what they look like. They are also well liked in stories, movies, and by humans that make it a point to observe them in their natural habitat. They live in the water, with most of them living in saltwater. There are some species though that live in rivers and bays as they are able to survive in fresh water. Dolphins are very social both within their pods of dolphins and often with humans too.

There are 41 different species of dolphins that have been identified. Some of them have been broken down from larger groups of species over time. With the development of new technology as well as DNA testing, those further breakdowns have been able to materialize. Of those 41 species, 31 of them are marine dolphins. There are 6 species that are classified as porpoises and the other 4 species are river dolphins.

Dolphins can be thrilling to watch when you are talking about them leaping out of the water and spinning in the air. There are certain species that are able to leap as high as 30 feet out of the air. Dolphins have a blowhole and they need to surface to get air. Some of them need air several times per minute and others only need air a few times per hour. They are generally blue or gray in color with white on the belly. Some of the species have tints of pink, yellow, and even black. 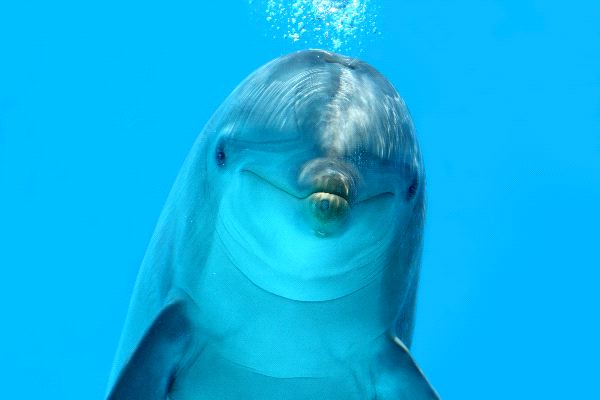 Dolphins do have teeth, and the number of them can vary based on the species. Some of them can do it in the upper jaw and in the lower jaw. They don’t use their teeth to chew food, as they swallow it whole. They can use the teeth though to grab food. The species determines how much food that they will consume daily, but it can be up to 30 pounds. They usually work as a teeth to round of food.

ncluding zig zags. Most dolphin species have great vision and they hear well too. They have very small ears that are located behind the eyes. They are believed to be able to hear 10 times better than the average person.

The one sense that dolphins can’t rely on very well is smell. There are some studies that indicate they may taste the water around them to pick up on smell. However, more information has to be explored to find out for sure why they do it. They use their other senses though to compensate for it. They use touching often to bond within their pod and to learn about their surroundings. Touch from humans can be damaging to the skin of dolphins so that is a risk factor for those species that aren’t shy around humans.

Even though dolphins are well liked, there are risks for them. Pollution in the water exposes them to plastic, chemicals, and other elements that aren’t good for them. Noise pollution due to industrialization and boating can cause high levels of stress. Commercial fishing can cause them to get tangled up in nets. Efforts have to continue to help with improving these issues so that numbers don’t continue to drop.

In some locations, it is illegal to harm dolphins in any way. Yet these laws aren’t fully enforced so there continues to be problems with hunting them for food and for thrill seekers to be able to have an exotic hunt. Taking a good look at dolphins today can help with new strategies for such conservation to help.

There is still plenty we don’t known about dolphins in regards to echolocation, socialization, and even their evolution process. Being able to further evaluate all of the needs of dolphins and to find a balance for them and humans in many locations is very important. Educating people to the risk to dolphins is a great way to be successful for helping them. A few of the species are already considered to be extinct and hopefully there won’t be any more of them added to that list in the future.