As much as people enjoy dolphins and what they offer, there are plenty of reasons why they are threatened. Many people don’t even realize that issues such as noise and pollution really take a toll on them. In fact, the biggest risks to dolphins have to do with the efforts of humans. There are plenty of chemicals, oil, plastic, and waste found in the various bodies of water out there that are the result of human efforts. These dolphins can have health problems because of them and they often see their food sources die out too because of them. Reducing the amount of pollution that gets into the water is very important. Not only for dolphins but for all aquatic life and for humans.

There are plenty of water related activities that people like to take part in. They include boating, jet skis, and more. Dolphins can be adversely affected by the noise. This can create stress for them and it can also reduce their hearing abilities. They can be struck by these vehicles in the water too which can cause injuries or death. Even with fast healing abilities some of them just won’t be able to swim or survive after such an accident occurs. In some locations there are limits as to types of vehicles and locations for them in the water.

There are plenty of commercial fishing operations out there, and they can result in the dolphins getting stuck in their nets. Even if they aren’t injured they can drown due to not being able to come to the surface for air. Some fishermen have taken action by checking their nets very often to release dolphins. Others have changed the types of equipment they work with to prevent such captures, but that can be very expensive.

The capture and killing of dolphins in Japan and Peru is very common with them being used for a source of meat. There is a small demand for it but still enough that it reduces dolphin numbers. When you are talking about some of these species just barely being able to survive, it is certainly something to take a close look at. Even with plenty of pressure on these governments to reduce such hunting the laws can be very difficult to enforce. That has only further increased the amount of money that someone can earn for dolphin meat or for leading exotic hunts for dolphins in some areas. 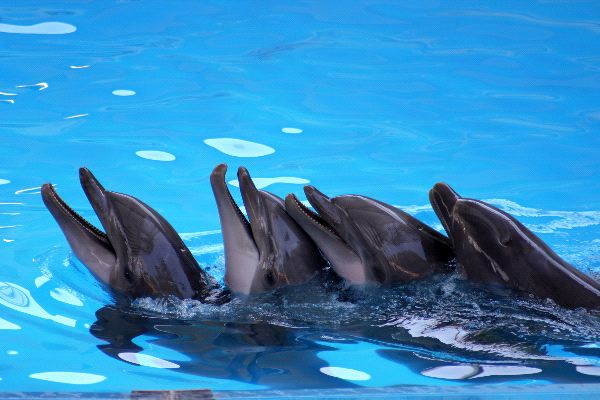 The skin of dolphins is rubber like, and it is highly sensitive due to their nerve endings. Humans in the wild may think it is fun to touch them but this can cause a risk to them. It can cause their skin to flake and it can also make them vulnerable to diseases. If the skin gets ripped it can allow infections or bacteria to form. There are many items in the water such as boat propellers that can harm the skin of dolphins.

Feeding dolphins in the wild can seem like a good idea at first, but it can create environmental issues. It can cause them to become very aggressive when they aren’t getting fed by humans. It can also upset their digestion and create internal health problems for them. Humans should never be giving dolphins any types of food in the wild.

Noise from boating and other activities has been mentioned, but it can occur on a larger scale and harm dolphins. In many locations there are issues with sonar from the naval ships, firing exercises being conducted in the water, and even mining or construction taking place. Dolphins can dive very fast due to these startling sounds and that can create decompression sickness for them. Ongoing stress can also reduce their appetite and prevent them from mating.

There continues to be quite a few different efforts in place to conserve the environment for dolphins. Even so, there are plenty of them including those that live in the rivers that are in critical need of help. The Marine Mammal Protection Act of 1972 and the Endangered Species Act of 1973 have been driving forces behind helping these dolphins.

There were some amendments made to the Marine Mammal Protection Act in 1984 that offered the dolphins more protection than before. One of them was to help out through the Department of Commerce. They put a ban on importing tuna from any fleet that didn’t have plans in place to reduce the death of dolphins. The problem though is that there continued to be more deaths of dolphins in locations around the world that where up to 4 times more than those in the United States.

To help with this cause, many of the conservation groups asked for consumers to boycott the purchase of tuna from such companies. This put pressure on Starkist, Bumble Bee, and Ralston to offer a dolphin safe policy for where they purchased tuna from. Given the fact that these three companies account for 70% of the tuna purchases, this was very effective.

In 1990 the Dolphin Protection Consumer Information Act also was initiated to provide more safety for dolphins. Following along behind it was the International Dolphin Conservation Act in 1992. It came with a 5 year plan to help prevent fleets from being able to chase or capture dolphins.