The Desert Tortoise is a species that falls into the category of being land dwelling. This living creature seems to be very slow, patient, and not to have a care in the world as it moves around the desert locations.

Like all species, the Desert Tortoise has a shell on its back. This offers them protection from predators and solace from the heat. They can stick their limbs and head into the shell for long periods of time. The body of the this Tortoise is dark green, olive, and black as is the shell. This allows them to be able to blend in very well to their surroundings. They have a body that is flat and that is shaped like a pear.

As their name indicates the Desert Tortoise lives in the very hot and dry regions. They live in areas where it is very difficult for most other types of living creatures to survive. They are found in a number of such locations around the United States. Those locations include the Mojave Desert and the Sonoran Desert. These areas range through Southern California, into Southern Nevada, and then through the areas of Arizona. They are also found in some areas of Mexico.

The ground temperature may be up to 140 degrees Fahrenheit for the Desert Tortoise. This is why they spend up to 95% of their time in burrows that they dig. That is also why it is very hard to get a good count of how many of them live in the wild. When they aren’t in burrows you may find them around rocks or large boulders.

They may dig just a few inches below the surface of the ground or several feet for their burrows. It depends on the quality of the ground and what they have to work with. They often have several openings to their burrow so that they can get in and out of it in a hurry if they need to. They can also have several different burrows in their home range.

While they are solitary animals, they often share burrows as they move around. This is easier then them all creating their own. They may end up in the same burrow from time to time though when they are trying to escape from danger.

Most people don’t think that the Desert Tortoise is vocal but they are. They may make grunting sounds, pops, hissing, and distress calls. Many of these forms of communication are to find mates or to warn others that they are in a territory that has already been claimed. 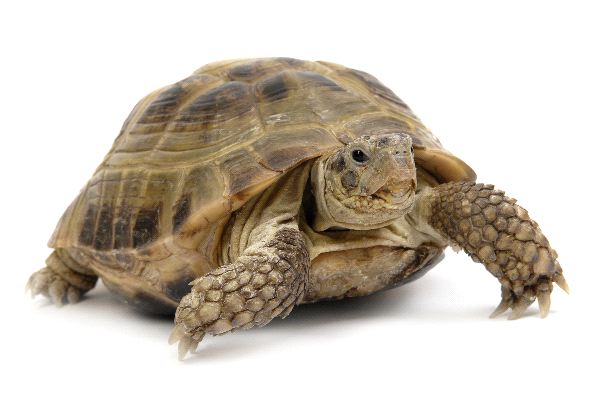 The diet of the Desert Tortoise mainly consists of grass. They also consume many types of wildflowers in the right seasons. They get water that they need from the grass that they eat. It can take them a very long time to consume a small amount of food due to their slow metabolism. They can often go up to a year without consuming any water on its own.

Herbs and shrubs also are a common part of the diet for this Tortoise. Even when there are drought conditions though they are able to thrive. Then they will consume dry forage that other living creatures have passed over.

The males can be extremely aggressive during the mating season. They have to be able to combat each other to earn the right to mate with the females. Mating can take place during any time of the year. A clutch of eggs ranges from 3 to 5. The temperatures will determine the gender of the young.