A mature Desert Iguana ranges in size from 12 inches to 16 inches long. The males are typically a couple of inches longer than the females. The body is round and the tail is extremely long. They are light tan color with black areas that cover the entire length of their body. This helps them to blend into the surroundings with ease.

The Desert Iguana is found in many dry and hot areas of the United States. This includes many locations scattered throughout California, Utah, Nevada, Arizona, and New Mexico. They are quite spread out in these areas and they may be hard to identify their overall numbers but they are believed to be plentiful.

They thrive in arid regions that offer them a great deal of sand and a very warm heat. They often stay well hidden around the rocks and brush. They may also be found in burrows that other creatures such as the Kangaroo Rat created.

The Desert Iguana does look for some areas of the desert to cool off and they find it under rocks and in the trees. They are very good climbers so getting to shelter is simple for them. However, they can move around in extreme heat. 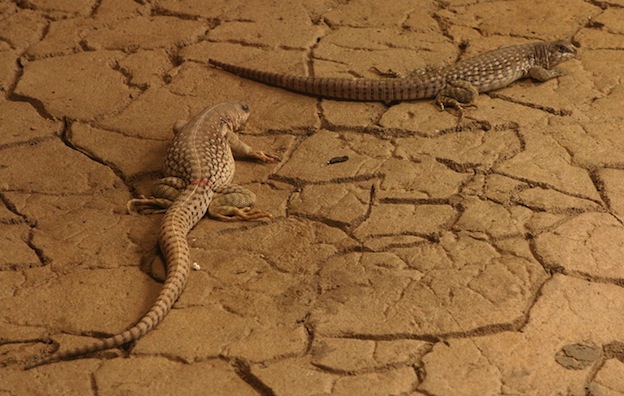 This species of Lizard consumes a variety of plants and flowers that they find in their habitat. The most common source of food for them is the creosote bush. They also will dine on a variety of insects around them if they have the opportunity to do so.

The Desert Iguana doesn’t need much water in spite of living in some of the hottest areas around the United States. They are able to store the water that they do consume and to excrete salt in its place.

Even though the Desert Iguana can live in very hot areas they do go through a small period of hibernation annually. This is usually from December through mid February. Mating can start in early March and last through May. The adults that are mature for mating will have a pink color on the belly during the mating season.

The males will go in search of females that give off strong scents from the glands around the tail during mating season. The males may have several confrontations with other males before they are able to approach a female. The fight for the right to mate is very strong in the males.

Once mating has been successful the male quickly moves along to find more females that he may have the possibility to mate with. The females will start to look for a warm and safe location where her eggs may be deposited into a nest. She will lay anywhere from 2 up to 10 eggs at a time in late May or early June.

Those eggs will be left alone from the moment that they are placed in the nest. They may hatch as early as July or as late as August. It depends on the amount of heat that they receive. The young have to be able to find food and shelter for themselves from the second they come out of the shell.