The Cuvier’s Beaked Whale has the widest distribution of all the species of beaked whales. Sometimes, you may hear them called the Goose Beaked Whale. That is due to the head being similar in shape as that of the beak for a goose.

The beak is much shorter than what you will find on other beaked whale species. They feature a melon that is bulb like and it is white in color. The body can be dark gray, dark brown with some reddish coloring, or just a dark shade of brown. There could be patches of white that are scars from conflicts with the Cookiecutter Shark.

The dorsal fin may be triangular but it can also be a different shape on the Cuvier’s Beaked Whale. The fluke is about ¼ of the overall body length. They can be up to 23 feet in length. They range in weight from 2 to 3 tones. The males and females look very similar to each other so it is hard to tell them apart based on body size. The males have two cone shaped teeth though on the bottom jaw that they use for fighting each other, usually for mating rights.

The body is round and the dorsal fin is located further down on the back than for many other whale species. The blowhole is very large and they feature a jawline that is turned upward, giving them the appearance of smiling.

The Cuvier’s Beaked Whale is found living in all of the oceans around the world as well as many seas. The tropical and subtropical regions as well as temperate waters are comfortable to this species of whale. Some of the common locations where they can be spotted include the Gulf of Mexico, the Gulf of California, surrounding the islands of Hawaii, the coast of New Zealand, and around Africa.

They tend to enjoy waters that are from 200 meters to 1,000 meters deep. They tend to stay in the deeper waters, but occasionally you will see them in shallow waters. They have a very diverse distribution and a higher population than most species of whales.

There isn’t very much known about behaviors for the Cuvier’s Beaked Whale. This is due to the fact that they tend to spend so much time at deeper water levels below the surface. When seen at the surface, they are observed rolling their head from side to side. Males tend to be on their own, but they can socialize in groups too. The groups tend to be small but at times have been identified with up to 25 members. 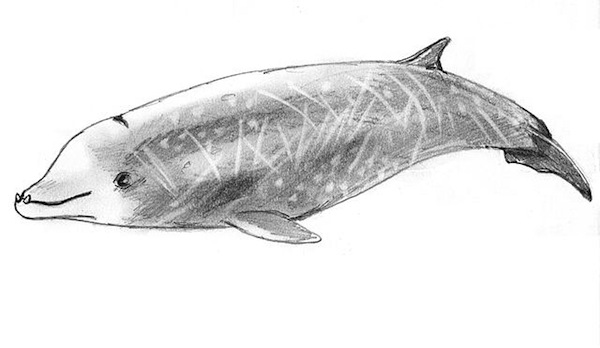 Various types of squid make up the diet for this species of whale. Other food sources include octopus, small fish, and various crustaceans. They dive deep into the water to find their sources of food. The Cuvier’s Beaked Whale feature ventral throat grooves. This allows them to create a vacuum inside of the mouth, and then they can successfully suck in their prey.

Maturity for mating depends on overall size for these whales. For females, it is about 20 feet long and for males it is from 18 to 20 feet long. They will typically reach such a size between the ages of 7 and 11 years. While mating typically will occur in the spring, it can occur at any time of the year.

There are twice as many males as females in terms of mature adults. There isn’t much known about the mating rituals for the Cuvier’s Beaked Whale. It takes a fully year before the young calf is born. They are born tail first, as are all whales, and they can weigh from 550 to 660 pounds. They can also be from 6 ½ feet to 9 feet long at birth.

The young consume milk from their mothers for at least the first year of life. They form very strong bonds with their mother. The females will have a new calf every 2 or 3 years. On average, the Cuvier’s Beaked Whale can live from 35 to 60 years in the wild.

Accidents involving boats and commercial fishing account for many injuries and deaths of the Cuvier’s Beaked Whale annually. They are covered by many different conservation efforts around the world. Even though their numbers are higher than many other species of whales, there is reason to take action to help protect their natural environment.

Some reports indicate that beaked whale species are sensitive to noise. This can cause them stress and even prevent them from mating. In some locations, stranded whales have been thought to be the result of high amounts of noise in their environment.