Common Traits and Habits of The Flying Fish 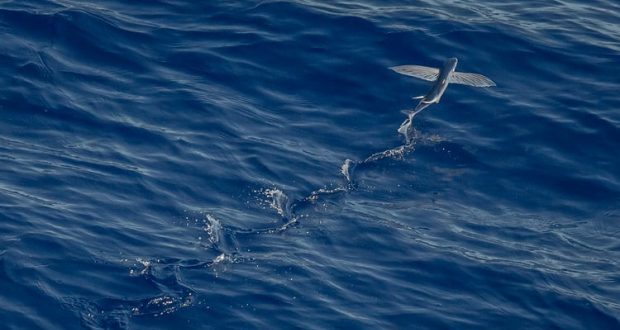 Flying fish in action are certainly one of nature’s more fascinating and magnificent sights. Some might wonder how in the world the fish can fly or why. Scientists have studied the fish for years and figured out the answer to these questions.

How do Flying Fish Fly?

The name flying fish is a misnomer. The fish are not capable of powered flight, but they can glide. According to the National Wildlife Federation, flying fish have ray-fins with highly modified pectoral fins. When the fish leap from the water, their fins extend, allowing them to glide up to 650 feet at over 35 miles per hour.

The rigid pectoral fins look like and act as wings, but they serve no purpose for swimming through the water. When in the water, flying fish keep the pectoral fins flat against their sides. Flying fish have extremely aerodynamic bodies.

So as they glide through the air, they experience very little air resistance. Flying fish also have an unevenly forked tail with the top lobe being shorter than the bottom. Flying fish grow to be as long as 18 inches, but on average, they are 7 to 12 inches long.

Why do Flying Fish Fly?

The common consensus for flying fish’s ability to fly is as an escape mechanism. When predators are chasing flying fish, they leap into the air and glide away to escape. However, when flying through the air, they are in danger of being picked off by birds of prey.

What do Flying Fish Eat?

Flying fish eat many different types of food. However, plankton makes up a large part of their diet. Flying fish are sometimes known to eat small crustaceans.

What is the Life Span of Flying Fish?

Flying fish spawn in the open ocean near the surface of the water. A female will deposit her eggs, which then attach themselves to seaweed and floating debris with sticky threads. Newly hatched flying fish have whisker looking threads or strands protruding from near their mouths to make them look like plants instead of fish. Flying fish live for an average of five years.

How to Protect Flying Fish?

Flying fish populations are actually stable all over the world right now. There are some places where they are fished for commercial purposes, but they are not being harvested in large enough quantities to damage the fish population severely. Flying fish are attracted to light and can be relatively easy to catch because the fish will sometimes leap into well-lit boats.

Where do Flying Fish Live?

There are 40 unique species of flying fish around the world living in tropical and temperate waters. Flying fish generally live in the open sea, but they can also live on the outskirts of coral reefs.

Floating over crashing waves, you can watch them skimming the ocean’s surface like a flock of sleek birds. You’ll find flying birds off the Atlantic and Pacific coasts of the United States, as well as the Atlantic, Pacific, and Indian oceans.