The early works of Ancient Greece and Rome include appearances of the Common Dolphin. If you haven’t seen them, take a look. You may be visualizing that you know what they look like but the Bottlenose Dolphin is the one frequently depicted in books, movies, and on TV. That may be what your mental image is of right now.

The Short- Beaked Common Dolphin can be up to 9 feet in length with a weight of up 440 pounds. They have bright colors on their body that are different from other species of dolphins. They feature yellow or tan colors on the flanks. There is a V shape cape of dark gray that goes over the dorsal fin on both sides.

The physical appearance of the Long- Beaked Common Dolphin is very similar but they have a much longer beak. They are also smaller in length with an average ranging from 6 to 8 ½ feet long. They significantly vary in weight too. They can be from 160 to 500 pounds with the males weighing more than the females. The dorsal fin in in the middle of the back. They also have the bright coloring.

If you have trouble telling these two types of Common Dolphins from each other, look at photos side by side. That will help you to pinpoint their differences and make it much easier for you to identify them successfully when you see them.

Like other species, this dolphin is very social. They live in groups called pods and they can have some of the largest numbers of all dolphin species. Some of these pods may have 10,000 members. With a group that large, they depend on various subgroups and a social hierarchy to keep order within the group. They may move around to the various subgroups depending on age, mating, and if they have offspring with them.

They are very active dolphins, and many people love to see them do a variety of things as they leap out of the water. Common Dolphins may breach, bow ride, pitch pole, and do somersaults. They move very easily through the water and they tend to spend lots of time playing and interacting with each other which is also fun to observe.

To help them create their deep bonds, they use echolocation and touching as part of their social aspects within a pod. They use plenty of type of communication too including whining, clicking, and whistling. The dialect that is used will vary based on the location of the pod and that has been interesting to evaluate. 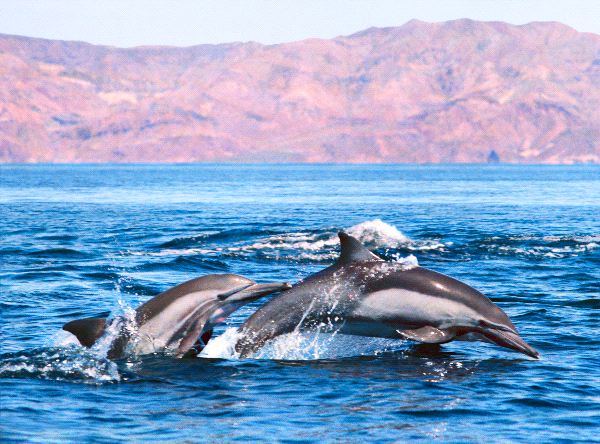 Plenty of species of fish make up the diet for Common Dolphins. What they will find depends on their location and also on the time of year. They can be picky when there is an abundance of food, carefully selecting what they will eat. When there isn’t so much to choose from though they will consider eating just about anything that come along. Other sources of food for them commonly include cephalopods and squid.

They spend their time playing and resting during the day with hunting for food taking place at night. They have 57 pairs of teeth located in the lower and upper jaws. They use them to find prey and to hold them, but food always has to be small enough to swallow. The Common Dolphin will eat about 5% of its body weight every single day.

The females may be able to mate as early as 2 years of age but it could be as late as 7 years. For males, it can be as early as 3 years or as late as 12 years. Research indicates that age isn’t the primary factor for determining when mating will occur. Instead, it has to do with their size as most them will being engaging in mating when they are about 6 ½ feet long.

Mating seems to occur from the month of June through the month of September. It can be from 10 to 11 months after mating for a young calf to be born. They can be up to 3 feet long when they are born. They will consume milk from their mother for several months before they are introduced to regular food. The consumption of milk can continue until they are about 18 months old. The females will give birth approximately every 3 years. In the wild, the Common Dolphin can live to be 35 years old. 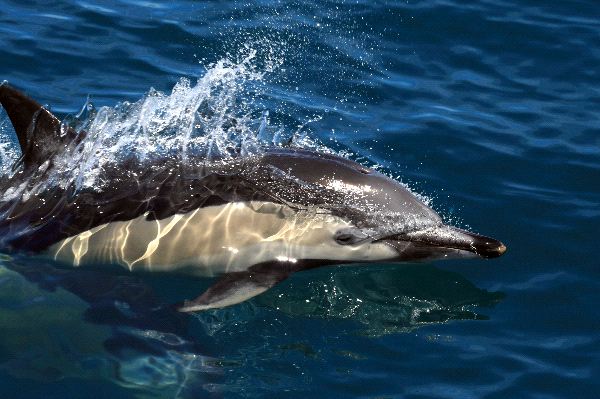 This dolphin has plenty of risks in place that are the result of humans. For example, heavy pollution in many of the waters where they live is a problem. Chemicals are dumped into the water that can create health problems for them as well as kill of fish that they rely on for food. Plastic in the water is a risk as they can swallow it and have internal health problems. Even with conservation efforts in place, the mass amount of pollution takes time to eliminate.

In Peru, there are issues with the amount of Common Dolphins that are regularly hunted for food. They may be consumed for their meat and the oil used for a variety of products. The use of their meat for bait to capture sharks is also known. The government of Peru has received a great deal of pressure about these events but they aren’t in a position to offer plenty of manpower to reducing the problem so it continues.

The increase in commercial fishing entities has also been a problem for them. Thousands of Common Dolphins are killed or injured due to this process. In the United States there are currently protective efforts in place that limit where fishing can be done and the types of equipment that are used for it.

Currently, the Short-Beaked Common Dolphin is considered to be at decent numbers and they are classified as least concern. The Long-Beaked Common Dolphin is hard to identify their numbers so what they need isn’t fully understood. The stand though is that without such conservation efforts for both species, they will be in serious trouble and that can be prevented.