The Common Basilisk is a type of Lizard that you will find in quite a few regions. It is frequently called the Jesus Lizard due to the fact that it is able to run on top of the water without sinking.

This species of Lizard has a very large size compared to other Lizards. There is a crest that is high along the back. For the males there is also a crest on the top of the head. The coloring for the Common Basilisk is olive or brown. They have a stripe that is cream color that goes along the back and the belly. They are about 2 ½ feet long as adults. Up to 70% of the body is the tail. They have small, sharp teeth on the inside of their jaws.

They feature very large feet that are webbed. They are able to go across the water without sinking as long as they move at a fast speed. The rate is about 7 miles per hour. It is also designed to swim well but they only do so when it is necessary. Instinctively they know that there are many predators in the water.

Central and South America is where you will mainly find the Common Basilisk. It tends to be found in the rainforest locations around bodies of water. They are able to climb very fast so they are found both around the water on land and in the trees.

The Common Basilisk is often found out during the day basking in the sunlight. At night they are found mainly in the trees up to 60 feet high. Being off the ground allows them to lower the risk of being found by predators. They are very fast sprinters. When they feel that they are being threatened they will run on the hind legs to water and cross it very quickly. 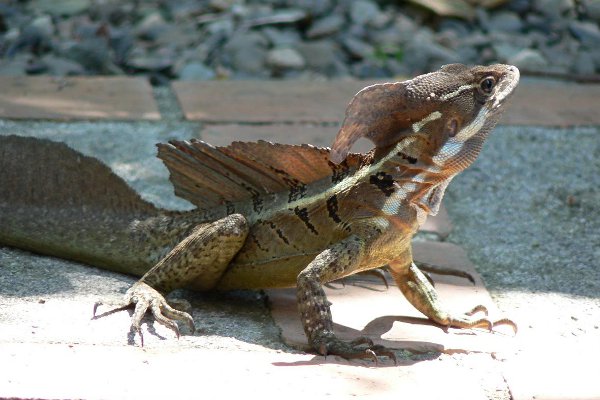 The Common Basilisk is an omnivore and has a wide range of food items for their diet. They consume eggs, fish, insects, flowers, and shrubs. They spend a great deal of time looking for food and consuming it. They tend to hide in the shrubs that they eat and that helps them to avoid a variety of predators as well as providing them with access to their meals.

Mating can occur for the Common Basilisk when they are about 1 year of age. Both genders have glands on their tails that will give off scents that attract them to each other. After mating they will separate and the male will continue on his journey to find more females for mating. The males may get very exhausted during mating because they have to fight with each other. Mating can take place any time of the year as long as the basic needs of the Lizards are being met.

The females may lay 3 or 4 clutches of eggs annually. Each of the clutches can have from 10 to 20 eggs. The eggs are placed in a nest where it will stay warm but also avoiding access to predators. The female won’t stay with them once she lays the eggs. It can take up to 3 months for the eggs to hatch. The young instinctively know how to care for themselves.

However, they are very vulnerable to various types of predators. Less than half of the Common Basilisk will reach it to the age of 1 year or more. However, there is still a high enough population of them that they aren’t considered in any danger at this point in time.