Several names have been used to identify the Commerson’s Dolphin. You may know it as the Skunk Dolphin or the Panda Dolphin. In some regions it has been called the Piebald Dolphin. The name for them is one that stems from the individual that first found them along the Strait of Magellan. This is credited to Philbert Commerson in 1767.

The size for the Commerson’s Dolphin can be very different depending on where it lives and where they eat. On the smaller side you have those that are about 4 feet long. On the longer side you have those that are 5 ½ feet in length. They typically can weigh up to 190 pounds and there is plenty of variation there too. Usually with dolphin species the males are larger but not with this one. Instead, the females are a bit bigger.

The body of the Commerson’s Dolphin tapers at the end and it is round like. They are designed to be able to use very little energy as they swim. They are very good swimmers. Connective tissues are found in the short pectoral fins. The pectoral flippers help with movement but they play an important role in allowing body temperature to be maintained.

The black and white coloring is very distinctive with this species of dolphin. The colors allow them to be well hidden in the dark, murky waters where they live. The coloring is also a telling sign as to the gender of the Commerson’s Dolphins. Both have a patch on the belly but it is V shaped for the females and oval shaped for the males. They feature from 116 to 120 teeth. They have them both on the upper and lower jaw.

The Strait of Magellan is where most of the Commerson’s Dolphins live, located around Argentina, living in the various inlets there. Kerguelene Islands is home to the other population and it remained unnoticed there until the 1950s. The shallow regions of the warm water is where you will find them. They live in bays, rivers, and harbors. They generally won’t be in water that is more than 650 feet deep.

Like many other species of dolphins, this one tends to migrate so that they can be in warm waters and find enough food in the winter months. They are active and spend most of their time swimming as well as leaping out of the water. They have plenty of other acrobatics too including twists and spins. When boats come along in fast boats, they are frequently seen bow riding behind them. They are one of the few dolphin species that has ever been seen swimming upside down. It is believed that this allows them to see their possible prey selection below them. 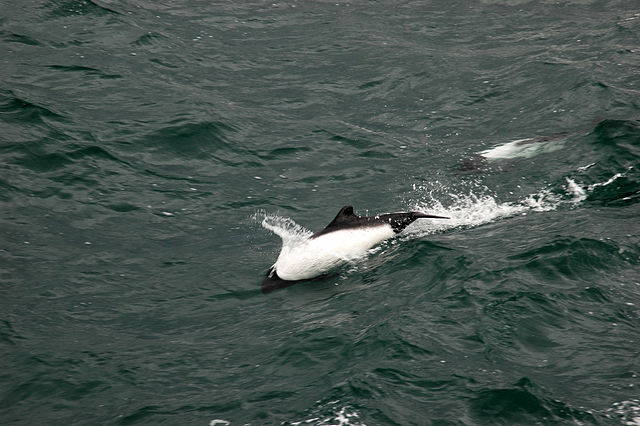 Sometimes, the Commerson’s Dolphin has been seen eating alone but most of the time it is a group effort to get the food. They use methods that allow them to successfully get schools of fish to ball up. Then they take turns diving into the fish and eating them. There can be about 15 members per hunting expedition and in a larger pod; they will break up into smaller groups. The fact that they can swim so fast helps them with getting food successfully.

In addition to fish, there are plenty of other food sources for these dolphins to consume. They will take an opportunity that they can find to satisfy their need for food. This can include consuming squid and octopus. They have been seen eating marine worms and algae too which is unique for dolphins. They are believed to have one of the largest food sources out there. What they will consume can vary based on location and on the time of year.

The Commerson’s Dolphin also has plenty of options when it comes to where they will obtain the food from. They may feed from the bottom of the water they can feed from the top of it. They will need to consume up to 10% of their body weight daily in food. This is about twice the amount of food that other dolphins need to eat daily. All of the food they consume has to be small enough to swallow as they don’t chew it.

Very little is really known about the mating for the Commerson’s Dolphin. It is believed that females are ready to mate a few years before the males. On average the time for mating ranges from 5 to 9 years of age. It will take place anywhere from September through February and that time often depends on where they are located.

It takes about 1 year after mating for the young calf to be born. Dolphins are always born tail first. They consume milk that is produced by the mother, and it can be up to 1 ½ years before they stop consuming it even though they are introduced to other forms of food at about 6 months of age. This dolphin can live for about 10 years in the wild. They do well in captivity with an average life of about 18 years. 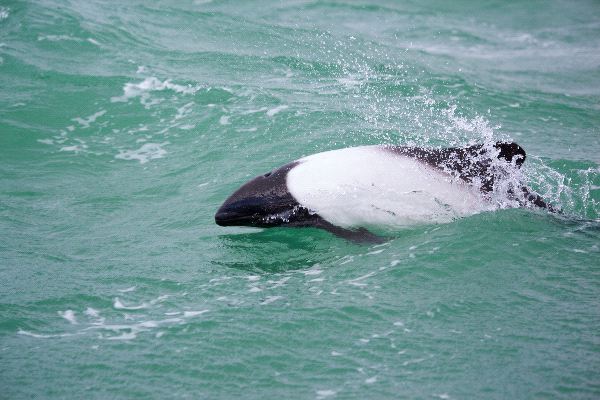 There hasn’t been as survey conducted about the number of them in the wild since 1984. This survey though only accounted for those in the Strait of Magellan. The estimated number of them was 3,400. There are conservation efforts in place to help ensure that the numbers of the Commerson’s Dolphin doesn’t get too low. Right now they are listed as a threatened species.

Reducing pollution in the waters where these dolphins live is a big part of such conservation efforts. Another effort strongly involves helping to prevent them getting tangled up in the fishing nets that commercial entities place into the waters. In some locations, the dolphins are still hunted for oil, to use as bait, or to eat their meat. Efforts to significantly enforce laws to prevent such illegal hunting continue to be an area of concern. They have to be tougher to get people to follow them.