The clouded leopard isn’t one of the best-known species of big cats, living as they do in the Himalayan foothills far away from the landscapes that are most often thought to play host to felines of this type. They’re little-studied and relatively rare in captivity, being as they are an incredibly secretive species.

Their markings, while highly distinctive, are quite unlike the spots of the more commonly-known panthera pardus – to whom the Clouded Leopard is not actually all that closely related. They are the smallest of the big cats, and are thought to be a potentially major evolutionary link from them to the small cats with whom so many of us live. Like many of their family, the felidae, their population is in decline; they have been classed as a ‘vulnerable’ species by the International Union for Conservation of Nature (IUCN) since 2008.

Unlike the leopards seen in most popular culture depictions, clouded leopards are not exactly spotted. Their markings come in shaded patches, blotches of ochre dusty grey. They have black ears, and grey-green or brown-yellow eyes – and they have magnificent bushy tails, thick and mottled with irregular but paired spots. They have short, stocky limbs, perfectly designed to climb trees and make large leaps – and their front teeth are large and pronounced, reminiscent of a sabre-tooth.

They are markedly small, in comparison to other big cats.

Clouded leopards are to be found throughout the vast majority of the Himalayan foothills: they’re present in Bangladesh, Bhutan, China, India, Malaysia, Myanmar, Nepal and Thailand. They’ve been extinct in Taiwan since 1989, though their populations there were once large – and that extinction saw the end of an entire subspecies, the n. n. brachyura. The only known legends regarding these cats are Taiwanese, a fact which renders their regional extinction particularly tragic.

They prefer forest habitats – either open or closed – but they are thought to be able to survive in degraded woodlands and open scrub. The greatest threat to their welfare as a species is deforestation, the spectre of which looms particularly dark over their highest populations in the forests on Borneo. 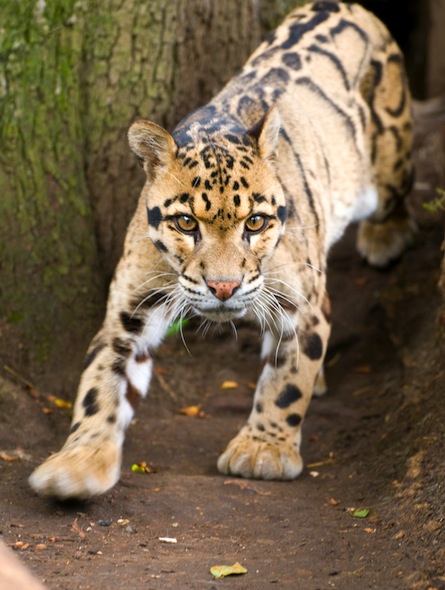 More so than any other species of big cat, the clouded leopard is a climber. They can scale a vertical tree trunk in seconds, hang onto branches by bending their hind paws and tails around a tree’s limbs, and descend that same flat vertical trunk head first – they’re also skilled at jumping, using their powerful hind legs to make large springs.

As big cats, they of course cannot purr – but their vocal range is otherwise wide, which strengthens the argument for their evolutionary link to small cats. They mew, hiss, growl, moan and snort, and they communicate with their fellows as much through sound as through body language and posture. They even make use of long-call communication, which is something that many other big cats do not do.

Relatively little, however, can really be known of their behaviour in the wild. They are secretive, nocturnal creatures, given to hiding in dense forest and spending their daylight hours resting high in the branches of trees. They’re also very solitary creatures, and do not move in prides as lions do.

They seem to prefer passive hunting than active chasing and stalking – they tend to lie in wait in the branches of trees or crouch down low into the scrub until their prey comes to them, whereupon they pounce and make the kill instantaneously with the back-of-the-neck bite characteristic of almost all cats.

As with their behaviour, it’s difficult to know much about the feeding and hunting habits of the clouded leopards as a rule – particularly as, of course, they cannot hunt in captivity. Most of what we do know comes from incidental observation, and studies are generally inconclusive.

While the females are generally slightly smaller than the males of the species, there is very little other differentiation between the sexes.

Generally speaking mating occurs between December and March, whenever the individual is somewhere around twenty-six months of age. The cats require a bond before they will mate; in captivity, mating programmes have only been successful between cats who have known each other for much of their lives. Otherwise, the male will very often kill the female during the mating process. They tend to meet and mate multiple times over the course of several days, after which time the male departs – he has no part in the raising of kittens.

Like all cats, the young of the clouded leopard is almost entirely helpless. Newborns are tiny, mewling, blue-eyed spotted kittens, blind and incapable of walking or crawling. They’re fully weaned generally by the time they reach three months, whereupon they gradually start to attain independence and leave their families behind well before the end of their first year.