You may hear the Chinstrap Penguin referred to by a variety of names but they are one and the same. This includes Bearded Penguin, Ringed Penguin, and Stonecracker Penguin. This is one of the three species of penguins classified as brush tail. The other two in this category are the Gentoo Penguin and the Adelie Penguin.

This species of penguin has a black band that is very narrow under the head. This gives them the look of wearing a black helmet. This makes them very easy to identify. They are medium in size with a black head and a face that is white. They range in height from 18 to 24 inches tall and they generally weigh from 5 to 9 pounds. The males are taller and heavier than the females.

The feet of the Chinstrap Penguin are very strong. They also have a bill that is short and that is black in color. They survive in water that is much colder than most species of penguins. This is accomplished due to their feathers being packed tighter together. This offers them more insulation and water proofing.

The Chinstrap Penguin lives around the South Sandwich Islands, South Orkeys, Bouvet Island, Balleny, South Shetland, and Antarctica. The isolated islands and the icebergs found in the sub Antarctic areas including the Antarctic Peninsula is where they live. They tend to avoid areas of heavy ice packs. They also don’t spend too much time around the continental coasts. While the Chinstrap Penguin does migrate a bit for mating, they tend to live in close proximity to these islands where mating occurs so they don’t have far to go. 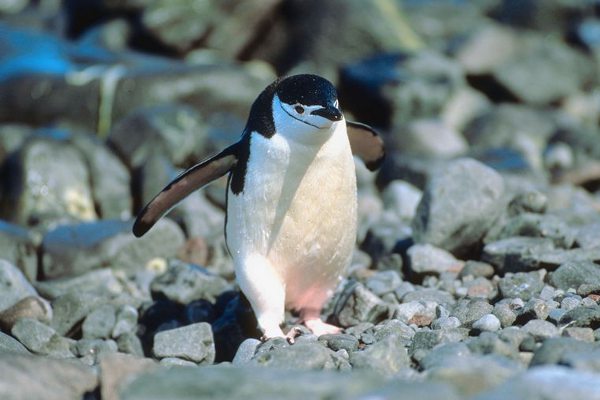 This is believed to be one the most aggressive species of penguin. There are often territorial disputes on land among them. This is especially true among the males when it is time for mating to occur. The males want to secure the best locations for the nest to be placed. This is one of the few species of penguins where physical fighting has been noted. Not just on land, but also when they are standing on frozen icebergs.

They are social as well, but there is a very complicated order to their balance within the hierarchy. There is a great deal of additional research that needs to be done in order to fully understand it. However, it does seem to work well for the penguins and to help reduce conflicts as they learn their place within the colony. Due to the enormous size of colonies, there are also sub colonies that are found within them.

Due to the icy surroundings, it can be fun to watch these penguins. They often will slide on the ice on their bellies rather than walking. It all looks like they are having a good time, but it helps them to conserve their energy. They will push with their feet to help them slide across the ice when they come to a stop.

The diet of the Chinstrap Penguin consists of small fish, shrimp, and krill. Approximately 95% of their diet is krill. They may swim many miles every single day in search of food. For their survival, they need to eat in abundance. That enables then to have the extra fat storage for when they are nesting and when they are molting. During those times, they won’t go to the water for food.

Most of the time, feeding is done at night so that they can get food that is found at the top of the water. They are able to dive about 70 meters for food. However, they typically won’t do so unless they are having difficulty finding enough food. 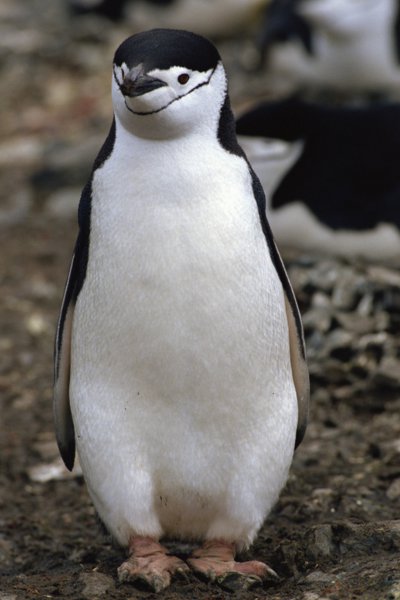 The colonies become very large when these penguins gather for mating. Through the use of their vocalizations, they are able to recognize their mate. This species will mate with the same penguin annually whenever possible. For newly mature birds, the males will offer calls that the females can respond to. If she is interested, displays with prancing and wings expanded occur to help them create a bond.

Solid ground that is free from snow on it is required for the Chinstrap Penguin to create nests. If that doesn’t happen, then the mating season will be very short and there will be very few offspring that year. They are very good at climbing, so they will often select rocky slopes and high cliff edges for a place to put their nests. While such a location is easy enough for them to reach, it is difficult for predators to get to.

These nests are built by the pair using stones and various other materials. The eggs are laid in November and hatch in January. The female will lay two eggs but the first is going to be significantly smaller. The smaller one won’t survive as the parents will provide care for the larger of the two. It takes about 37 days for the chicks to emerge from the eggs. During that time the parents will take turns lasting about 6 days incubating them.

The young chicks will be cared for by both parents for the next 30 days or so. One will go get food while the other cares for it. Then the chicks will join a group while both parents go get food that they bring back to share. They will molt around 60 days old and then be able to survive in the water.

At that time, they will be on their own to survive including finding food and staying away from predators. In the water, the biggest risk to them is the Leopard Seal. On land the Brown Skua and Sheathbill are risks. They will hunt both eggs and chicks. Due to the very cold and isolated areas, they usually don’t have problems with humans.

There are estimated to be between 12 and 13 million of these penguins in the wild. Their life span ranges from 15 to 20 years in the wild.