The Chilean flamingo is the most commonly misrepresented of the species, and is often mistaken for another breed because of its similar characteristics to almost all of the other breeds of flamingo. Because of its habits of being integrated with other colonies of flamingos, and its difficulty in being distinguished from other species, it was, until recently, considered conspecific, which means they are largely the same species, though this has been found to be untrue. They are known to converse in goose-like honking or squawking.

The most distinguishing characteristic of the Chilean flamingo, over its other widespread counterparts, is the pink “cap” that covers its ankle joints. The joints are designed to aid the flamingo in dipping its head under the water, so it may scoop up its food. The feet of the Chilean are also pink, another characteristic that distinguishes it from its other cousins.

As the namesake implies, the Chilean flamingos are most commonly found in Chile. But this is not the only location they can be found. Because they can so easily integrate with other species of flamingos, they can also be found in the Andes, Uruguay, and Peru. They generally frequent brackish waters, such as mudflats, and mountainous water flows. The Chileans tend to prefer shallow waters like other flamingos. The areas surrounding these water sources are generally alkaline, lending? to sparse vegetation and wildlife.

Like most other species of flamingo, the Chilean is a very social creature, living in colonies of up to thousands of birds, sometimes of mixed species. They are prone to feeding, mating, and migrating in these huge collective flocks. They migrate in v-shaped formations, flying with their legs and necks fully extended. To keep the collectives in formation while migrating, they honk and squawk much like geese. 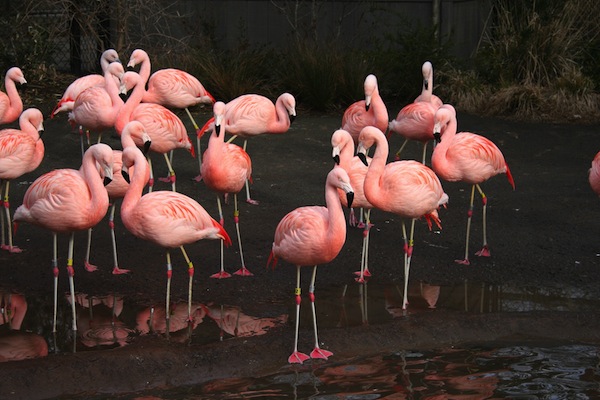 When sleeping or at rest, they stand on only one leg, to save some energy, and curl their long necks under one wing. The flamingo will often sleep in the water, to protect itself from most predatory threats, but are more commonly found in the tall grasses near their chosen bodies of water. The time they do not spend sleeping, eating, or mating, is spent preening their feathers, to keep their bodies waterproof and clean. This also keeps the wings in good order for when they need to fly. When they sleep or rest, they tend to face the wind, in order to keep rain and moisture from penetrating their downy coats.

Most of the day, Chilean flamingos can be found at the edge of lakes, ponds, and other shallow water sources, where they eat and care for their young.  While feeding, these flamingos can be observed grunting at each other, in low, almost conversational tones.

The Chilean flamingo feeds on aquatic plants and small organisms. Its mainstays are mostly underwater invertebrates, like shrimp, brine, insect larvae, and occasionally smaller mollusks. The pink coloration of the flamingo’s feathers is due to the large amount of ingested beta-Carotene found in these creatures or through a fortified feed. The flamingo uses its webbed feet to stir the sediments from the bottom of its preferred habitat, then swings its neck back and forth, with its head upside down, using the natural filters in its mouth to sift through the mud and rock it has kicked up. The Chilean flamingo then uses its powerful tongue to push water and other unwanted materials out of its mouth, and keep its delicious food source.

Flamingos are also known to eat diatoms, microscopic plankton, and even blue-green algae that is stirred up by their feet. They are most commonly found feeding near the shore, where they can keep their bodies above the water, and the sunlight can reach the bottom of the water source. They usually eat about ten-percent of their body’s weight in plant particles and invertebrate life every day.

The mating rituals of flamingos are a complex ordeal. Usually, the Chilean flamingos will all mate as a collective, the males gathering in one location to do a dance involving ruffling of wings, and stretching of the necks. When a female finds one of the males appealing, she will take the male to a separate location to copulate.

The Chilean flamingo is a monogamous creature, meaning that the birds mate for life. When a mate dies, or is lost to the collective, the remaining flamingo may or may not take a new mate, usually depending on the remaining bird’s age. Both parents incubate the egg in a moated nest, built with mud, sticks and grass. The egg is generally an ovoid shape, and chalk colored. When the egg hatches, both parents will raise the chick to sexual maturity, then it can be generally accepted into the collective.  It takes about two months for the chick to reach the stage of independence, and before that is usually gray or sometimes white in coloration. The young flamingo will not mate for another five years or so after this, until it has reached its full pink coloration.

The Chilean flamingo will usually only lay an egg once every year, but are sometimes known to mate as many as two times a year. Mating season generally occurs in spring.