Cheetahs are iconic cats, famous for their speed and strength. They are also somewhat singular animals – they have several differences to the majority of the feline species, most of which are outlined in subsequent parts of this article. They’re the subject of any number of stories, including some of the best-known myths and tales of history.

They’re incredibly vocal cats, with the ability to produce chirps, stutters, growls, yowls, moans, hisses, purrs, mews and spitting sounds – all of which they use to warn, call, appeal to and otherwise communicate between themselves. Being small cats rather than big cats, they cannot roar – but they more than make up for this with the vocal range they do have.

Cheetahs are both tameable and trainable, and have been kept both as hunting companions and as pets.

The thing that people know the best about cheetahs, of course, is that they can run – faster than any other land mammal. And this is true: they reach top speeds of seventy-five miles per hour, so long as they’re covering distances of no further than five hundred meters. They can accelerate from nought to sixty in less than five seconds, and their entire bodies are built to make this happen – they have small heads, narrow waists, enlarged hearts and lungs, wide nostrils, and are generally built for speed in every way possible. They’re actually terrible long-distance runners, however, and lose speed extremely fast after the initial 500 meters.

In terms of their markings, cheetahs are pretty easy to spot. They have white undersides, bushy tails, and largely golden coats with a spattering of black spots. Their young have the same markings, but are much fluffier – they lose this extra coating of fuzz as they grow, and by the time they reach adulthood they’re sleek and slim with nothing that might slow them down while on the run. 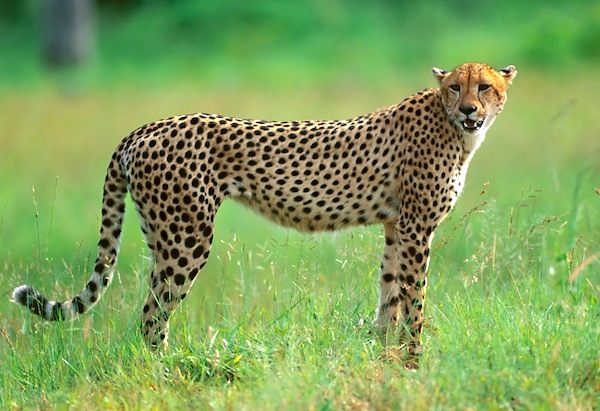 Cheetahs are mostly to be found in eastern and southwestern Africa, though there are still some few living in parts of Asia – particularly Iran, where conservationists are taking steps to protect the last remaining growing Asian cheetah population.

They are not at all adaptable, and have trouble living in habitats that are not their natural home. They need to live in what are called “open biotopes”: semi-deserts, prairies and thick brush. They can just about adapt to grasslands, savannahs and mountainous terrain, but they struggle a great deal outside of those areas.

Most cats are solitary, but cheetahs are not – or at least, the males aren’t.

Once the litter has left their mother’s den, the brothers stick together – or, if there is only one male, he seeks out another small group or lone male and joins with them as a group. These groups, usually consisting of no more than four cats, defend small territories that touch on the points of as many female habitats as possible.

When it’s time to mate, the males briefly separate and each find a different female cheetah to copulate with. They then immediately reconvene, and have no part in the childrearing process. By and large, they spend their time resting, hunting, and playing – play behaviour never entirely dies out amongst these groups.

Females, on the other hand, do not maintain ‘territories’ at all in the strictest sense. Instead, they have a defined home rang that they will not stray from – but they don’t defend it, and it often overlaps with the home ranges of their own mothers and sisters.

Once a litter has left the nest, it stays together in the mother’s home range for six months to a year, learning how to survive alone. Once this period is over, the females roam a little way away to begin finding their own solitary home ranges, and the males stick together and move toward establishing a territory of their own. 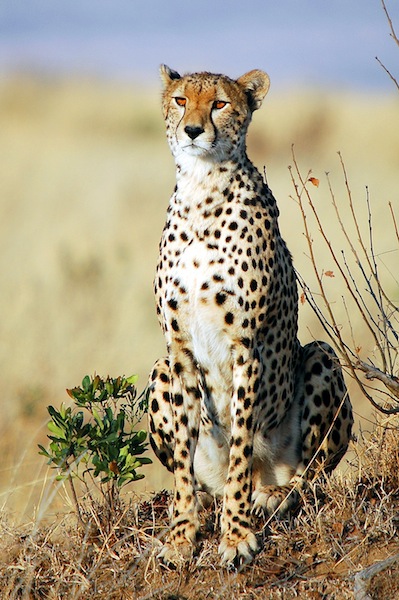 Like all cats, cheetahs are obligate carnivores. They eat mostly smaller mammals – everything up to 40lb in weight – and are particularly fond of hunting gazelle, springbok and impala. They can take down wildebeest and zebra, but would rather not – and if necessary they will eat guineafowl and hares, although several of these are needed to feed an adult cheetah for a day.

Most cats hunt by scent, but the cheetah relies mostly on her powerful vision to track down her prey. They stalk to within a hundred feet, and then give chase – a process which is over in less than a minute. If a catch is not made quickly, the cheetah will give up; they’re terrible at distance running, and their only real hope is to sprint the last little while and grab the animal by dint of sheer, unadulterated speed. This works a little over half the time.

Male cheetahs, perhaps as a result of inbreeding, are often not as fertile as they perhaps should be. They do not mate hugely often, do not always impregnate when they do, and do not generally produce litters of much size. To make matters worse, anything up to 90% of a cheetah’s young die during the first few weeks of their lives. Their own reproductive problems account for most of their classification as a species near threat.

Thankfully, this is a little ameliorated by the fact that they don’t have a season; they can mate at any time of year, and don’t form inter-sex pair bonds at all. Males occasionally squabble over who gets to mate with a particular female first, but mostly both genders copulate with a range of cheetahs several times throughout the year – beginning at a year old for a male cheetah and two years for a female.

The gestation period spans ninety to a hundred days, which is the same as very many wild cats of about their size. Litters vary in size between a single cub and as many as five, and can have a variety of different fathers amongst a single litter. They have to learn how to avoid predators almost from the off – first by hiding in the brush while their mother hunts, and later by hunting alongside their mother from the age of just six weeks.