The Carolina Anole or Green Anole is a very interesting type of Lizard. Another name that you may hear it called by is the American Chameleon because it can change colors. That does make things a bit confusing though because scientifically this Lizard doesn’t fall into the category of Chameleon at all.

Being able to change their color based on mood or habitat is a great feature for the Carolina Anole or Green Anole. This can help them to remain well protected from various predators in their natural environment. Most of the time they are lime green with a cream or white belly. They have a very long tail that gets thinner the further away from the body.

The Carolina Anole or Green Anole is mainly found living around the Southeastern part of the United States. North Carolina, South Carolina, Texas, Georgia, and Florida are the states where you will find them. They have also been found in smaller numbers along the Caribbean Islands. In recent years they have been introduced to the islands of Hawaii and the Ogasawara Islands. So far they seem to be doing very well in those locations.

They tend to do very well in dry areas, places where there are high levels of humidity, and everything in between. They do require a place where there is warm temperatures though in order to do very well. They are often out during the day enjoying the sunlight and basking in it.

The Carolina Anole or Green Anole is believed to be one of the most aggressive species of Lizards. Studies show that they will even try to fight their own reflection in a mirror. They often fight for territory, food, and the males will become aggressive when it comes to their desire to mate with the available females.

When this species of Lizards feels like they are being threatened they will allow part of their tail to break off. Since the tail is often a place where humans will pick them up this allows the Lizard to escape. In a few weeks the tail will grow back. They are believed to be very curious creatures and they will explore endlessly to see what is going on around them. 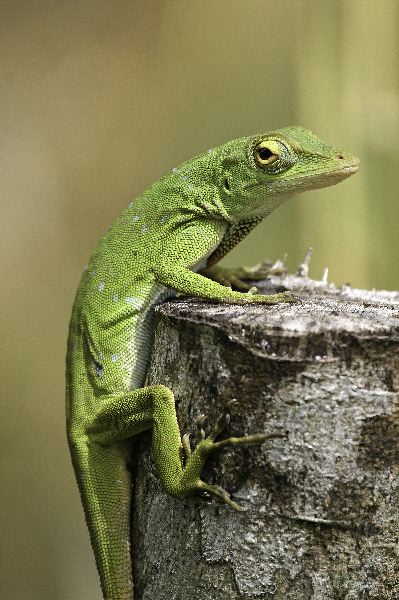 The Carolina Anole or Green Anole feeds on a variety of different insects. Their main staple of food though are crickets. They will also eat moths when they are able to do so. When they aren’t able to find enough of those food items they will often eat grass that is found in their habitat.

The Carolina Anole or Green Anole has a fairly long mating season. It starts in mid April and it can last through August. The males will have very bright colors of red, orange, and pink during this time. Those colors are attractive to the females and that is what will determine who they consent to mate with. Males strive to keep other males away so that the female won’t have anyone else to select for mating.

The males will journey on to find other females to mate with. The female will start to look for a place where she can deposit her eggs. She may have a clutch of about 10 eggs. She will deposit them about 2 weeks after mating. It will take from 30 to 45 days for them to hatch. The hotter the temperatures are the less time it will take. She won’t be around after depositing the eggs and the young know how to meet their own needs from the start.