According to the IUCN, the caracal is “of least concern”. They’re a widespread, thriving species – so much so that they’re considered pests or “problem animals” in Namibia and South Africa.Their most common name is developed from a Turkish phrase that translates as “black ear”, but they have others – including the Afrikaans ‘rooikat’, meaning ‘red cat’, and various names describing it as an African or desert lynx, despite its lack of relation to the lynx as a species.

They are small cats rather than big cats, as can be seen in the fact that they are capable of purring while drinking water. They’re one the largest of all the small cats, though – as well as the fastest by a considerable margin.

Caracals have friendly, familiar faces, highly reminiscent of domesticated cats. Their most distinctive feature by far is of course their ears – which have long, prominent tufts, giving them a perpetually curious look. Their fur is usually of a reddish colour, and unmarked – though some sport a few spots on the insides of their forelegs. The pads of their paws feature numerous stiff hairs, which are thought to enable them to move through soft sand more quickly than they otherwise might. 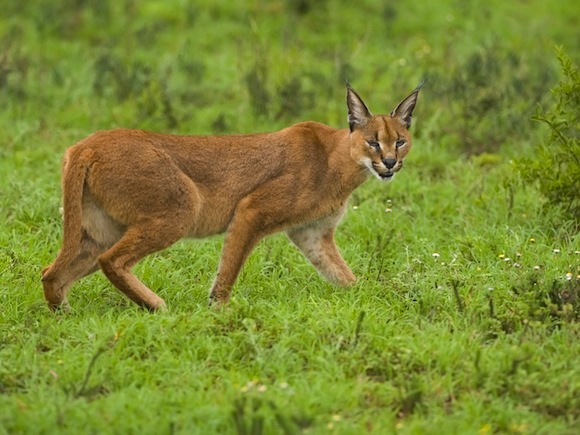 The caracal is an extremely versatile species. They’re found in Algeria, Angola, Congo, India, Iran, Karakum, Morocco, Nigeria, Nubia, Pakistan, Palestine, Punjab, Syria, Transvaal, Tunisia and South Africa – amongst other places – and they can inhabit habitats of all sorts, from moist, dense woodlands to semi-desert. They’re thought to especially favour savannah regions with lower rainfall and some cover, however, and as such their Namibian population is continuing to expand in a time when many feline populations are in decline.

The caracal is a highly solitary creature that maintains a large and well-defended territory. They’ll mark their territory with scent marking, faeces, urine spraying and simple patrolling; they usually live alone, but they do from time to time exist in pairs, both breeding pairs and same-sex pairs of two caracal who have grown used to living together.

They produce the usual range of sounds for small cats, and will growl, hiss, mew, and call – but they can also produce a ‘barking’ noise, which is far more unusual and generally used as a warning to any other caracal or predator nearby in times of danger.

They have very little need for drinking water, and can exist perfectly well from nothing but the bodily fluids of their prey for extended periods of time. This of course makes them particularly well-adapted to desert life, and as such they hold territories in several semi-desert regions of Africa and Asia.

Sadly, they have a habit of attacking domesticated cats and livestock animals in some parts of the world – meaning that they have had frequent run-ins with local populations in places like Iran and South Africa, and in some regions it is legal to kill them on sight if you so wish.

Like most small cats, caracal are stalkers. They approach swiftly and silently till they’re within a sixteen foot range, whereupon they sprint and then leap – and their springs are fast, with a very long reach. They’re known primarily for their astonishing ability to capture birds by leaping nearly seven feet into the air from a standing start – something that no all cats is capable of.

They live mainly on very small animals, such as gerbils, mice, birds and hares. They are capable of killing larger prey, however – they occasionally tackle antelope of gazelle. Like almost all cats, they kill most of their prey with a bite to the neck – though some larger animals require some additional raking with the claws to fully subdue them. 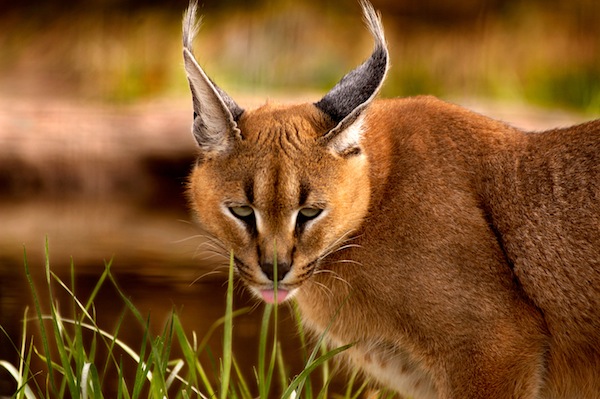 They’re remarkably picky eaters, too – they discard most of the internal organs of any prey, and won’t eat any hair. They shear meat neatly from skin, and remove all the feathers from any bird they catch.

It is possible to tame them, as is the case with many small cats. In some parts of India and Iran, they’re used to assist human hunters in their work – and their incredibly developed ears render them easily the equal to this task! They hunt in part by listening out for their prey, a skill which is of benefit to the hunters they accompany.

Caracal do not have a formal ‘mating season’, and tend to mate year-round. When in heat, females copulate with several males – the highest-status first and the lowest-status last – and the males quite often fight aggressively for the privilege of being the first (or occasionally only) to mate with any given female.

Litters contain something between one and six kittens, who are incapable of leaving the birthing den until they reach about one month. After ten weeks they are fully weaned, but they usually stay with their mother for the majority of their first year.