As you learn about the Bull Shark, you will get the impression that nothing can hold it back. This species is one that has been well known by people to be on the look out for. They are fast and they are aggressive though so you may come into contact with one without realizing it. Many people are in awe of the fact that they can really live in just about any type of warm water location.

The name for this shark comes from the way that they bump into their prey – similar to a bully in the hallway. They are very powerful and that makes them a force for other living creatures including humans to recognize and to reckon with.

The size of a Bull Shark is very large with them being about 7.5 feet long to 11 feet long and weighing around 200 to 300 pounds. When you look at other species of sharks that are the same size you will see that this one is wider. They feature grey color on the top and white on the belly so that they can blend into their surrounding both above and below them in the water.

They also have a caudal fin that is lower than other shark species in addition to being smaller than theirs. The snout is very small and it doesn’t have a ridge in it. They have two dorsal fins, but the second one is smaller than the other. They have very sharp teeth with enough force behind their bite as about 1,250 pounds. The design of their bodies make them very fast as well as agile.

The Bull Shark is able to thrive both in saltwater and freshwater which is very interesting. It is one of the few species of sharks that has this adaptability. It tends to live in the shallow waters such as in rivers and along the coastal locations. They like water that is warmer and that is why they are often found around the waters of Africa.

However, they are known to migrate a great distance for food when necessary as well as for mating. They have been identified moving into the areas of Indiana and the Ohio River which is amazing according to many of the experts that have confirmed such movements. Even though they can live in water up to 490 feet deep, they tend to still to less than 100 feet deep.

Sometimes, changes in environment can cause a shift in where the Bull Shark lives. For example, after Hurricane Katrina, there were high numbers of them found in Lake Ponchartrain. They may have had to relocate out of necessity in order to find enough food. Many experts now consider them one of the most dangerous sharks in the world though since they really can thrive in any body of water as long as they have enough food. With many species of sharks losing their habitat this may prove to be a winning element for the Bull Shark and ultimate survival. 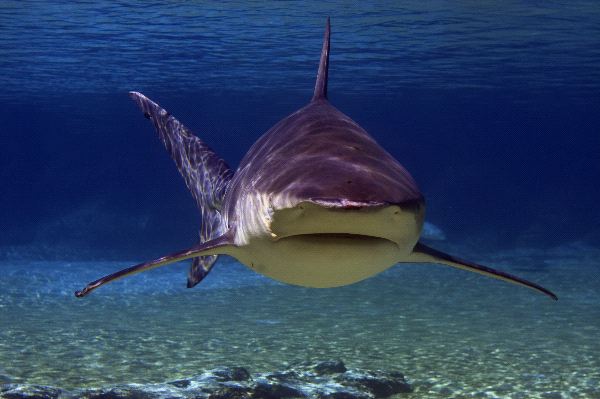 One of the things about the reputation of the Bull Shark is that they are well known for being very aggressive. This can be a danger to people since most people would never think about sharks when they are in a river or other freshwater location but it is a possibility.  Almost all of the close to shore shark attacks on humans are attributed to this particular species.

They are listed as the 3rd largest risk to humans when it comes to sharks. They are only behind the Great White Shark and the Tiger Shark.

They are very territorial and they will attack anything that gets into their environment and they feel is a risk. They have been known to bite horses that are in the water getting a drink. Still, there is good money to be made by hunting these sharks so many people do take that risk of being bitten. The Bull Shark is used for hides, a source of meat in some areas, and for their oils. In spite of such information, this is one species of shark that doesn’t seem to be at risk right now of extinction due to lower than average numbers.

There are several types of food sources for the Bull Shark. They include bony fish, birds, dolphins, small sharks including others of the same species, terrestrial mammals, echinoderms, and crustaceans. They often bump into their prey and then bite it while they are still surprised from that initial bump.

They are opportunistic and will spend many hours each day looking for food. They will eat heavily too when there is an abundance of food to be found. They tend to hunt on their own but there have been observed times when a pair of Bull Sharks will hunt as a team. They may be dangerous to humans because they will attack and they will kill persons in order to keep their habitat their own. With the number of people enjoying water related activities, it can be a scary interaction. 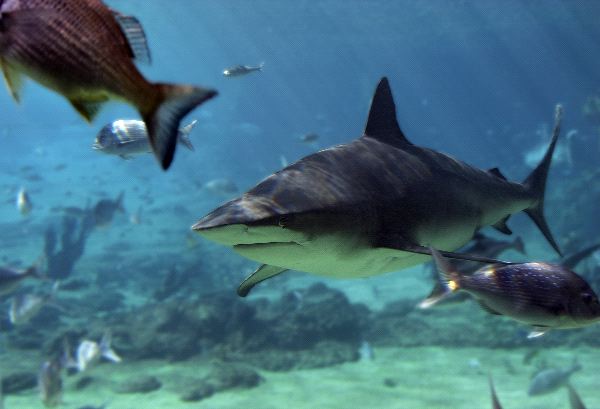 The mouth of the river seems to be the location where the Bull Sharks will migrate and mating will take place. Generally, they will be at least 10 years of age before they mate for the first time. This is typically going to be an event to occur in the late summer. It takes about 12 months before the young pups are born from the mother.

She can have a litter of pups that ranges from 4 to 10 at a time. They are on their own to swim and meet their own needs from the moment they are born. They young have a high mortality rate due to predators. However, those that do survive will spend the early part of their lives in estuaries that are low saline locations. They will move to other areas once they are larger and less likely to be attacked by various predators in the water.