The Box Jellyfish is also known as the Sea Wasp or the Marine Stinger. It is one of the most dangerous of all species of Jellyfish in the world. Many people are afraid to swim in bodies of water where they live. The fact that they have such a toxic venom that they release is why people don’t want to be around them. Yet only a few human deaths can be attributed to this particular species of Jellyfish.

There are significant physical differences for the Box Jellyfish than other species. Instead of looking like a dome they tend to look more like an umbrella. This design allows them to be able to move with ease. They can move faster and with more control than any other species of Jellyfish in the world.

They are also one of the few species of Jellyfish that have eyes. They are in clusters on all sides of the body and have 24 of them. They are able to distinguish between light and dark. They are also able to identify various type of light too. Their eyes make it possible for them to find prey and to escape predators.

It is very difficult to understand the evolution process for Jellyfish as a whole, including the presence of the Box Jellyfish. More than 700 million years ago the Jellyfish was on Earth so they are able to adapt to changes all around them. The Box Jellyfish has many differences that distinguish them from other species.

While there are theories we really don’t have any information about how this particular species was formed. Most experts believe that the Box Jellyfish had to deal with various predators that were large so that is why their toxins are stronger than other species. It isn’t understood why they have eyes though and very few species do. It is believed their eye development and their advanced censoring system though are both part of the evolution process for this species of Jellyfish.

The Box Jellyfish has been given the nickname of the Sucker Punch Jellyfish. This is due to the fact that you won’t see them coming. You won’t know that they are upon you until it is too late. The instant pain from the sting is going to be too much for you to ignore. Getting someone out of the water quickly that has been stung by one is very important. People can suffer from shock and fear and not be able to get out on their own.

The body design of the Box Jellyfish offers it a great benefit that other species don’t have. They are able to move around on their own and not use great amounts of energy to do so. They can use the currents of the water or the wind to move then in the direction they want to go. However, they can also move on their own and not have to follow such guides if they choose not to.

This means that they aren’t going to be floating into harms way of predators without any recourse. It also means that they have a better chance of survival because they can get to their food sources. When there are adverse currents they won’t end up dying due to those types of movements. 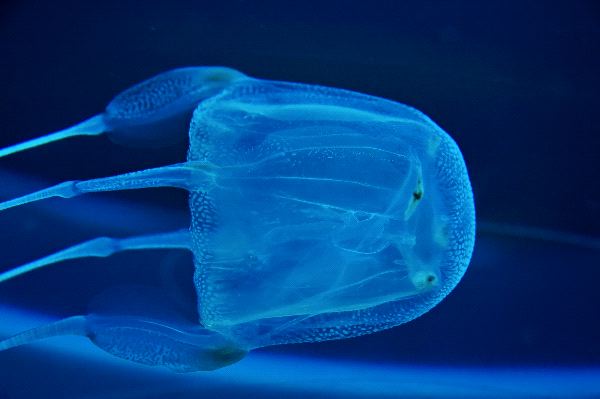 The Tropical Indo Pacific region is where you will find the Box Jellyfish. However, there are species found in locations all over the world. Along the oceans of Japan and California are very common too. In the South the Box Jellyfish has been found residing in the ocean waters of New Zealand.

There are large species found in Australia though that have been known to bite humans. There are some deaths in that area that have occurred due to such stings. There has been a huge increase in the number of Box Jellyfish that are found in Australia. It is believed that this is due to the climate changes as well as the depletion of fish in that area. Since fish are a common predator of the Box Jellyfish more of them are able to reach maturity and reproduce.

The feeding habits of the Box Jellyfish are one of the few species that are able to go hunt for their food resources. They don’t just float along in the water and take what comes along. Still, they are opportunistic so they will eat heavily when there is plenty of food around for them to do so.

Their diet consists of fish, plankton, and crustaceans. They will also consume larvae from various species of Jellyfish and even fish eggs when they find them. Their stomach is very large and allows them to eat plenty at once. They use their tentacles to get the prey and then immobilize it with their toxins.

They swallow their prey whole and then will quickly move on to find more of it. There can be times of the year when they don’t get enough food. That is why they will consume all they can when it is readily available.

Box Jellyfish have the ability to reproduce both sexually and asexually. They are either male or female based on their DNA profile. However, they have the ability to offer both eggs and sperm independently. Once the eggs have been offered then sperm mixes with them to create larvae.

This stage can take a long time, even more than a year. The polyps will continue to grow and to branch out. There can be hundreds of them connected through very thin feeding tubes. As food supplies come along then the nutrients are distributed to all of the polyps through those feeding tubes.

Over time the polyps will start to breach off from each other. This is when there will be the actual Box Jelly fish. Before it can breach off though a mouth has to form, eyes form, and more tentacles form so that it will be able to swim away and care for itself. The average life span in the wild is less than 1 year.

Even though the Box Jellyfish is a very aggressive type of species there are still some predators it has to contend with. Turtles are the biggest problem for them due to their shell protecting them from the toxins. They also have protection over the eyes. Turtles and various species of fish will consume the Box Jellyfish to survive.

Due to the severity of the sting from such a Jellyfish humans are prime predators of the Box Jellyfish. They tend to want to remove its presence from beach areas. They know that people can’t come and enjoy those locations when there is a risk of being stung by one of them. They also know that tourist dollars will stop coming along due to the risks if the problem isn’t kept under control.