If you aren’t familiar with too many species of dolphins, chances are at least one of them on your list is the well-known Bottlenose Dolphin. They are frequently used in books, movies, and they are the ones often trained at locations such as Sea World for people to see. Part of what makes them so attractive is that their facial features make it look like they are smiling.

The Bottlenose Dolphin is large sized and the length of it can average from 10 to 14 feet. They may way as much as 1,100 pounds but the typical size is from 330 to 440 pounds. The location where these dolphins live and what they eat plays a huge role in their length and their weight. What researchers have found though is that those living in warmer waters tend to be smaller and lighter than those that live in the colder regions.

They have a body that is well designed for moving through the water without too much energy being used as they do so. The rubbery feel of their skin surprises may people. They have layers of skin like humans, and the old skin cells flake off. Every couple of hours, the Bottlenose Dolphin generates a new outer layer of skin. Their skin is at least 10 times thicker than human skin, but could be up to 20 times thicker.

They don’t have any hair and they don’t feature any sweat glands. The beak is very short and you will notice that they have pointed ends of their flippers. The color for a Bottlenose Dolphin can range from light to dark shades of gray. They seem to have lighter colors on the flanks. The belly is usually white but it can have a pinkish tint to it.

Just like land animals with forelimbs, these dolphins feature pectoral flippers with a similar skeletal make up. They are shorter though and the presence of connective tissue is what allows them to function. This is also where the blood circulating through them allows these dolphins to regulation their body temperature.

The melon is the rounded area of the forehead and that is where echolocation stems from as there is fat stored in there. They have eyes that are located on the side of the head. While they do have ears, they are very small and hard to see unless you look right behind the eyes for them. 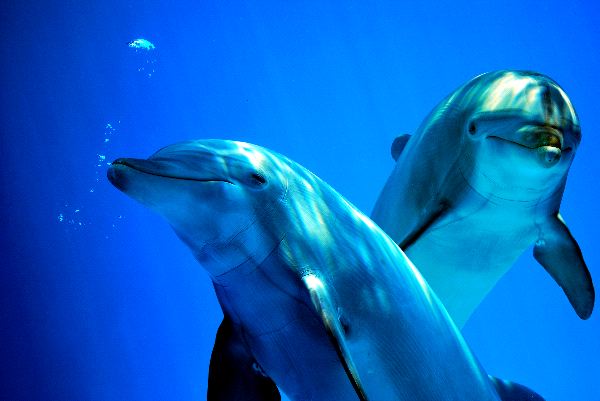 There are plenty of locations where you can see the Bottlenose Dolphins. Southern California is a common location where people go to observe them. Other places include the North part of Japan, Chile, Australia, Hawaii, Norway, and Nova Scotia. Smaller numbers of them have been seen around the tip of South Africa. The largest numbers of them are the stretch that runs from the Gulf of Mexico to Cape Cod.

Even though these dolphins must surface for air every few minutes, they can live deeper in the waters. They also live close to the shore depending on their habitat and the availability of food. They can remain under the water for about 4 ½ minutes before they need more air.

One of the spectacular things about watching the Bottlenose Dolphin is that they can breach up to 16 feet in the air when they leap out of it. They can so this several times in a row before they move on to other behaviors. They are very intelligent which is why they are often trained for entertainment as well as to help with a variety of water related military needs. They are quite loveable and they are more likely to get close to humans in the wild than other species of dolphins due to their curiosity.

A group of Bottlenose Dolphins is called a pod, and they are very social with each other. There can be from 10 to 100 members in a pod. When there are larger numbers, there are also various subgroups within it that allow them to carry out their overall hierarchy. They tend to spend lots of time socializing and they have been seen socializing with the Pilot Whale.

Migration is part of life for these dolphins so that they can maintain living in bodies of water with the right temperature. They also migrate in order to continually have access to food. Some of the pods have regular migration routes that they follow annually. Others though randomly migrate based on needs.

The majority of the diet for the Bottlenose Dolphin is fish, and they have lots of species that they can consume. What they can get though depends on where they live. Squid is also a food source for these dolphins. The use of echolocation allows them to be able to find where their food resources are located in the water.

Hunting for food is a group effort, and in a larger pod they will break into units so that they can help each other. They will need to eat up to 35 pounds of food per day depending on size. At the least, they will need to consume 10 pounds of food daily. They may use techniques to get schools of fish to ball up or they may use their flukes to hit the fish and stun them. All food is swallowed even though they have teeth. The teeth help them to hold the food. 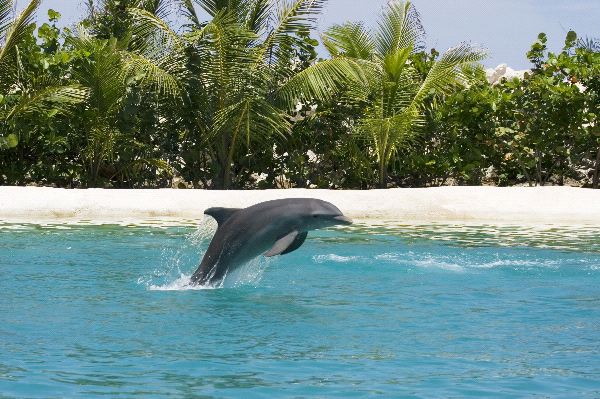 The location of the Bottlenose Dolphin influences when they will be ready to mate. Females are usually going to mate from 5 to 13 years of age. For males it could range from 9 to 14 years of age. The young calf will be born about 1 year later. They will drink milk from the mother for the next year and a half or so. However, they will be introduced to fish and squid by the time they are 6 months old. They can live from 40 to 50 years in the wild, and females tend to live longer than the males.

There are conservation efforts in place to help protect these dolphins. One of the largest risks they face is the waters they live in being polluted. That pollution can make them very sick and it can increase the risk of diseases. Chemicals and plastic in the water are main concerns, but noise pollution can create problems too. It can create very high levels of stress that prevent them from finding food or mating.

The noise often comes from boating activities, so one of the focuses of such efforts involves restricting where boats are able to be at. Under the Biodiversity Action Plan in the UK, it is against the law to hunt Bottlenose Dolphins or to cause them any type of harm.