Many people are in awe of the sleek design of the Blue Shark and how beautiful it really is. They may seem like they aren’t going to move very fast, but that is surprising. They do travel long distances for mating and food. However, they are also known to move at virtually very small speeds in the water that seem like they are standing still for very long periods of time.

The body of this species of shark is deep blue which is where the name of it comes from. The belly of this shark is white. The streamlined body is designed for effortless movement through the water. They are able to move with ease from the surface of the water to the depths of it. They have a pectoral fin that is very large and that assists them with the overall navigation in the water. They also have a high amount of oil in the liver that helps them to move long distances and not use up high amounts of energy.

The average length of the Blue Shark is 12 ½ feet long. They also range in weight about 450 pounds. The size and weight of them though can vary based on location and food resources they have access to.

The tropical and temperate waters of the oceans are where you will find the Blue Sharks living. They do tend to stay in the waters that are cooler than other species of sharks. They have been known to migrate thousands of miles annually. They also live in the deeper waters which is why you won’t see them as you may other species of sharks that are closer to the surface. Yet that is also where accidents can occur when people are surfing, diving, and more.

The Blue Shark has one of the largest ranges in terms of depths of the water. They can be living at the surface, in the middle, or at the very bottom of it. This type of adaption makes it very possible for them to be able to get food and to find shelter that works for them. These abilities are part of the overall survival for this species of shark. They are known to migrate thousands of miles for food and for mating.

This species of shark often isn’t found alone. Instead, they form groups based on their gender and even on their size. They are often referred to as the Wolves of the Sea due to the complex levels of hierarchy that they form within their groups which highly reflect those of wolves.

Due to their territorial instincts and their aggressive behaviors, divers have to be very careful. It is important that they know where Blue Sharks are and that they avoid them. Many of the types of filming of these sharks have been done with the divers in cages for their own personal safety. 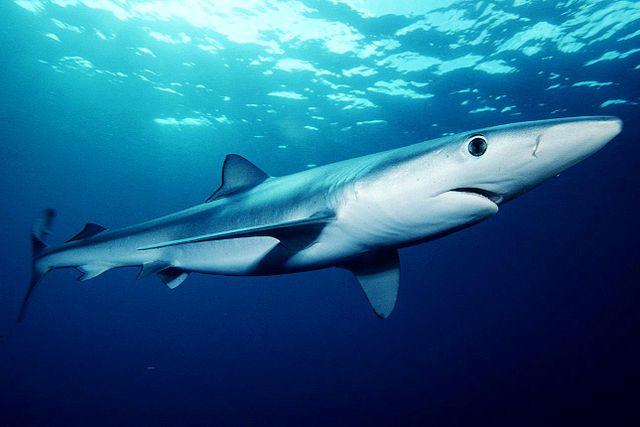 It does take volumes of food to take care of the needs of a large Blue Shark. They tend to consume a variety of food items including squid and small fish. They tend to find many sources of food from schools of fish. However, they tend to also consume very large fish when they have the opportunity to do so. Sometimes, they will consume various sea birds.

They are very opportunistic when it comes to food resources. They will dine on what they can find including tons of smaller items in the water. This can include lobster, crab, carrion, and shrimp. They will eat until they virtually can’t eat any more. One of the dangers to the Blue Shark though is that they will eat virtually anything they can find.

This includes litter such as plastic and even rubber tires that are in the bodies of water. This can result in them becoming very ill and even dying. It can also increase the chances of these whales suffering from diseases and various types of parasites that may be in such rubbish and garbage.

The age of maturity is younger for the Blue Shark. It ranges from 4 to 6 years of age. The mating rituals of these sharks often seem very aggressive. For example, the males may bite the females and many of the older females have lots of scarring from it. However, it is believed their skin is very thick so that the biting isn’t inflicting any pain on them. After mating, it can take between 9 and 12 months for the young to arrive.

Blue sharks have some of the largest litters of pups of all species. Their litters can range from 4 to 130 pups. However, there is a very high mortality rate and only a small fraction of them will reach the age of maturity.