The Blue Monkey is also known as the diademed monkey. This is considered to be an Old World monkey which is native to the areas of East Africa and Central Africa also. They can be found near the Congo River basin east of the East African Rift; and they can also be found in Angola and Zambia.

The Blue monkey might be named ‘blue’ but it is not actually blue – not noticeably bright blue anyway. The monkeys do have some blue hair on its face and body or at least, it does look like a blue shade. However, there is no wide spread shading of blue to the monkey’s body.

The shades of the monkey’s body are grey or olive, though its face is darker with some yellow or paler patches to the forehead. It also has a black cap with its front legs and its feet dark also.  The mantle is more of a grey, olive color.  Some of them have whiskers and white neck.

The blue monkeys can be rather small; they will range from around 50 centimeters to about 60-65 centimeters. These measurements do not include the tails because the tails can be just as long as the body of the animal itself.

The male’s weight can range from 6 kg to around 8 kg; and the females can be a good 4 kg in size. Though, they do have large cheek pouches so that they can carry food while they are out foraging. Their nails on the blue monkey are flat; though they can be sharp especially when it comes to foraging for food sources.

The Habitat of a Blue Monkey

Most of the blue monkeys can be found near or in montane bamboo forests as well as evergreen forests.  They love forest canopies to help shield them from the sun and predators; and they do not often reach the ground because they love the shade of the tall trees.  They trees are safe for them. 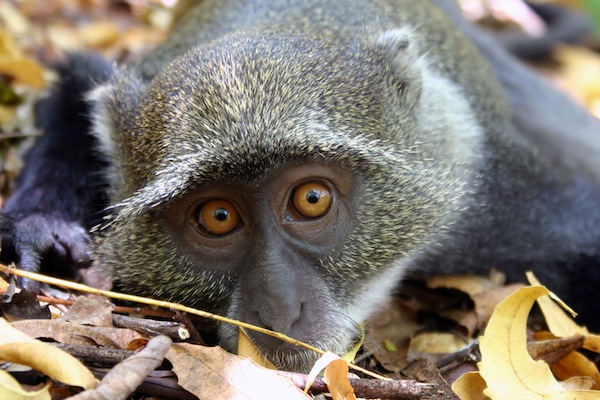 Though, there are times, occasions really when the monkeys will come to the ground.  However, this is going to depend on the weather and how safe the monkeys feel to come to ground. The blue monkeys are dependent in living near good strong water sources; and needs shaded and humid areas.

The blue monkeys do love the taller trees because they offer the best shelter, food and safety from predators. Though, they do love lowland tropical areas which have a lot of moist and shade from the hot weather.

The Behavior of the Blue Monkeys

The blue monkeys are a little different from many other species of monkeys. They are going to mostly live in female dominated social systems; this really means that the females are going to stay within groups, their natal groups. However, the males of the groups will move on from their groups once they reach maturity.

The blue monkey groups usually consist of one male and a large number of females and infants.  This helps to avoid inbreeding. The males will reach maturity and the head onto another group but it can take time to find another group and as a result, can be seem as solitary males.

When it comes to social relationships, the blue monkeys do not have the strongest of instincts.  There is only a small amount of time spent socializing; mostly the social interactions occur when a group is playing together and grooming one another. Infants are going to interact more with their mothers and other adult members of the group. Though, infants don’t usually go near their male counterparts.

Alloparenting is really handlers of the infants. They are young female blue monkeys which look after most of the younger monkeys and carry the infants to help keep them safe. This will help to teach the infants to interact with all monkeys in later life.

What Do Blue Monkeys Eat?

Most blue monkeys are folivorous; and will eat leaves and mostly fruits. For most of the blue monkeys, they are content in eating fruits that are scattered all around the forests. Though, there are times when the monkeys will eat slow moving creatures and they can easily capture.

However, the blue monkeys are only going to eat things such as slugs and worms when the food sources are scarce and cannot find fruits or leaves to eat.  For many of the blue monkeys found in captive areas such as zoos, they will concentrate on eating vegetables, fruit and special primate biscuits also. 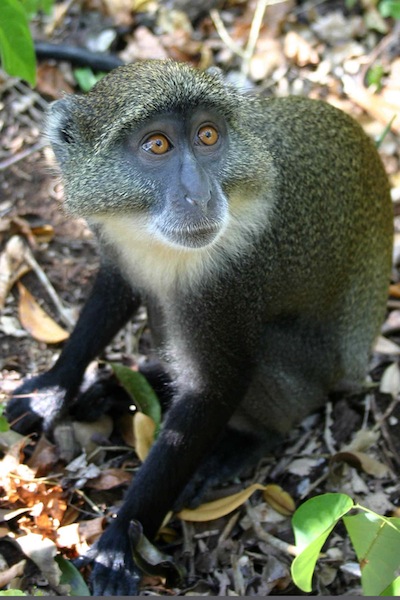 How Does The Reproduction System Work In Blue Monkeys?

Males are larger in size and will mate with the females when the weather is warm but during the rainier seasons.  However, the females can only give birth every few years, 2 years to be exact.

The infants will be born with fur and usually have their eyes opened also which is unique.  However, the blue monkeys can have only one male in the entire group of a dozen to maybe 40 blue monkeys.  All of the others will be female not including the infants; however, this prevents any fighting or disharmony within the group.

All infants will become mature at around the 3 year range, maybe a little older for some.  The females will attract the males via their body language. She will tell a male when she is ready to mate and who she wants to mate with also.

Breeding however can occur at any time of the year, mostly it is around the warmer months but the blue monkeys can mate all throughout the year. The results usually are the female giving birth to one young.

The young are able to support their own weight as well as hold onto their mother also; though the females can provide enough milk for the young infants for six months.