One of the larger sized sea birds is the Black-Browed Albatross. It is the most common of all species of the Albatross due to the number of them and the diverse locations where they live. The name for this particular bird is due to the fact that they have a dark black plumage above the eyes.

This particular bird can be up to 37 inches long and weight up to 10 pounds. The females are typically smaller with a length of about 31 inches and they weigh about 6 pounds. They can have a wing span that ranges from 79 to 94 inches. The body is a white color with dark black around the tips of the wings. They have a bill that is yellow and orange.

In the wild you will find the Black-Browed Albatross around all of the Southern Oceans. There are 12 distinct islands where they are found to live and to breed. There have been some sightings of them in the USA but not very many. It is suggested that those in the USA have been imported from another country or they escaped from a zoo. Another though is that they were being kept as a pet and either got out or they were turned loose by the owners.

When a Black-Browed Albatross finds a mate they will likely keep it for life. If one of the pair dies it may be many years before the other will find another mate and take part in reproducing. They are very intelligent birds and seem to develop deep bonds with their mate. When they migrate they will form large colonies that can be come very noisy. Those colonies may seem chaotic but there are plenty of sub groups inside of it to keep it all balanced. 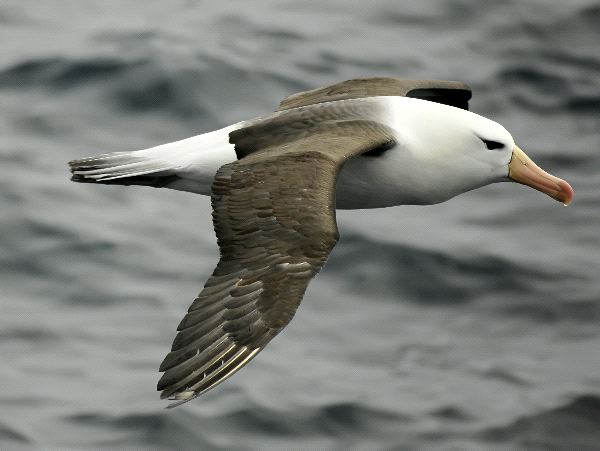 This bird eats a variety of items depending on habitat, season, and availability. Their diet consists of carrion, crustaceans, squid, fish, and various types of remains from aquatic life that may be floating around in the water. They have also been seen taking food sources away from other birds.

The Black-Browed Albatross is an opportunistic feeder. They will eat and eat when there is an abundance of food. You may be able to see one resting on the water with a bulging belly from a recent feast. They have to let some of the food digest before they will be able to fly again.

One of the displays that the Black-Browed Albatross offers to get a mate is to fan out the tail. They also engage in various calls and dances. The males are usually the one to initiate it and then they will try to get a female to respond.

They will mate once a year, creating a nest on the edge of a cliff or other location. The couple will work as a team to protect the egg. It is going to be placed into the nest between September and November. The incubation period depends in temperatures. It can be 68 days when it is warm and up to 71 days when it is cooler.

The chicks will be under the care and supervision of both parents for about 4 months. That is when they will be strong enough to fly and to take care of their own needs. They won’t be mature to breed until they are about 10 years of age. The lifespan of the Black-Browed Albatross is really amazing. In the right conditions they can live up to 70 years.