Bird of Paradise Facts and Information

Introduction to Bird of Paradise

The bird of Paradise is a very lovely bird that many people are fascinated about. You may not know that it is very closely related to both the Bowerbird and the Crow. There are 43 species of this particular bird. It got its name in the 16th Century when it was brought to Europe on the Victoria ship by Magellan. It was believed that this was the majestic bird that represented the beauty of the land that they were going to explore as well.

This is a medium sized bird that has very lovely colors. They have scarlet, green, yellow, and blues. They actual colors that they can display often depend on location. Some of them will be very colorful while others will be limited to just a couple of colors. Those color schemes also depend on genetics and the particular species of Bird of Paradise.

The males have very long feathers at the tail that are called streamers. Some of the species have additional feathers on the top of their head. It is believed these displays help them with finding a mate. The females are plain in those areas and many people get them mixed up. They assume the Bird of Paradise with all the colors are the females rather than the males.

Out of the 43 species of Bird of Paradise 35 of them are only found around New Guinea. The other species are found in various locations around Australia. It is hard to identify how many of them are out there due to the fact that they live high up in the canopy of the forests. It is believed that many of them have been affected by substantial habitat loss in the past 20 years. 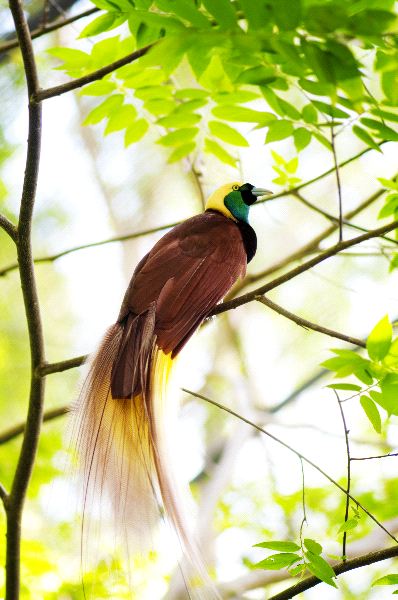 They tend to be isolated creatures that live alone. They will only spend time around each other when it is time for mating. They often do various acrobatics that are interesting to watch. They may sway from side to side or they may hang upside down. Since they often do such behaviors alone it isn’t believed to be for mating. Yet experts really can’t figure out what purpose such movements offer for the Bird of Paradise.

Fruits and berries are the most common food sources for the Bird of Paradise. However, some species also consume lots of insects as well as spiders. Worms have also been identified as a source of food for this bird. It comes down to where they live and what foods that they have available.

They don’t consume a great deal of food but it can take them several hours a day to find it and to consume it. They are often opportunistic and they will eat much more than they need to if there is an abundance of food.

The males take part in various dance rituals where they will display their additional colored feathers. They may do this type of dance for many hours before they give up if a female isn’t responsive to them. If a female does respond they will mate and then the male quickly runs off. He will try to find several other females he can mate with before the season ends.

Once mating has occurred the female will lay a 2-3 eggs. They are small and they are a brownish orange color. She will do her best to hide them from predators. She will only venture away from them when she has to get food. They will hatch after about 20 days of incubation. 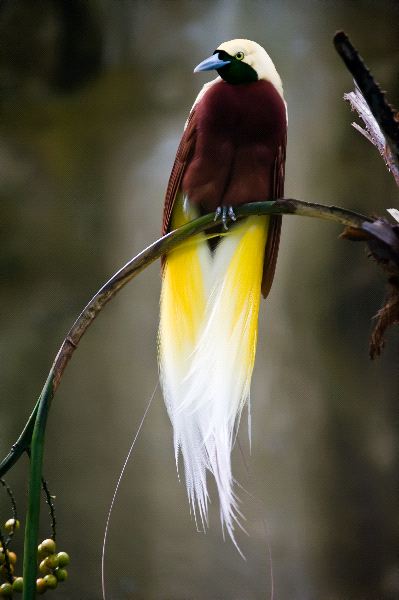 Bird of Paradise Facts and Information