The Beluga Whale is also called white whale. It is commonly associated with the narwhal, who has a long tusk. This particular species is also often called the sea canary due to the singing it does vocally. They are easy to identify due to the white coloring and a protuberance on the head. They are at risk though of not surviving due to whaling and environmental factors.

The body of the Beluga Whale is very stocky and robust. They have thick folds around the body of blubber. That is fat stored up to help them be insulated. That fat is also going to help them during migration when they will fast. Approximately 40% of their body is blubber. While adults are white in color, the newborn calves are dark gray or dark brown. As they get older, they get lighter.

They tend to average around 10 feet though. The males are taller and heavier with an average from 11 to 15 feet and weigh around 3,300 pounds. The females are about 10 to 13 feet long and they weigh close to 3,000 pounds. They usually stop growing around 10 years of age.

This toothed whale features 8 to 10 teeth that look like pegs on both sides of the lower and upper jaw regions. On average they have a total of 34 teeth. They use them to grasp and tear but not for chewing. They feature two flukes, which are lobes on the tail. There is no bone in them and they help the whale to navigate and to stay balanced. They don’t have a dorsal fin.

What is very unique about the Beluga Whale is that they can move their head side to side and up and down. They don’t have fused neck. This allows them to catch their prey with ease even in slippery conditions such as mud and ice. Each year around July, they shed their outer layer of skin which is called molting. They will stay in the shallow water and rub the old skin off on the course gravel.

The Arctic waters are where the Beluga Whales live. They are found around Greenland, Northern Russia, and North America. They do migrate in the spring to the North. During autumn when ice is forming, they will venture South. They do quite well in the cold water and will go to the icy edge of the Arctic waters. They spend the summer in the estuaries and bays that are shallow.

In the winter months, they will live in areas that have loosely packed ice. They rely on the current from the ocean and the wind to provide cracks in the ice. They are essential for survival so that they can come up for air through those breathing holes. They are often found in the shallow waters of the coast, and they are easy to see as the water will often just barely cover their bodies. Sometimes, they do get stranded in very shallow water due to low tides.

Yet they also do very well in deeper water. Being able to adapt to the changes in water temperature is part of their survival instinct. They live in very close proximity to the Narwhal. In many areas, their habitats actually overlap. 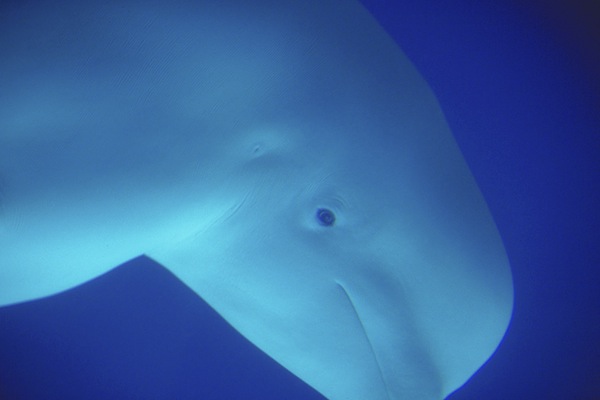 
The Beluga Whale is very social, and they tend to stay in groups of at least 10 for migrating, hunting, and social interactions. Those groups can get as large as 100 members. They are well known for their singing which is similar to that of a canary. They also use whistles, chirps, clicking, and squeals to effectively communicate with each other. Their hearing is highly developed and they also use echolocation. Their vision is believed to be very good both above the water and in the water.

During migration, they may gather in groups of thousands. Bouncing is a common activity they take part in. They spend lots of time playing games in the water. They will play with various objects they find too including dead fish, plants, and wood. They are very curious when they see boats or people.

This particular species of whale is a very slow swimmer, and they don’t seem to be in a hurry when it comes to searching for their prey. They consume squid, octopus, crab, and shrimp. They will dive up to 1,000 feet to find food, but typically will only dive half that distance. They can stay under the water for up to 20 minutes. However, they usually come up for air every 3 to 5 minutes.

They tend to eat up to 3% of their body weight per day. They forage for food in shallow water, at the bottom of it. They have a wider range of motion when it comes to finding food than other whales. They rely on suction to allow them to use a jet of water and to remove pray from the bottom of the water that they swallow whole. 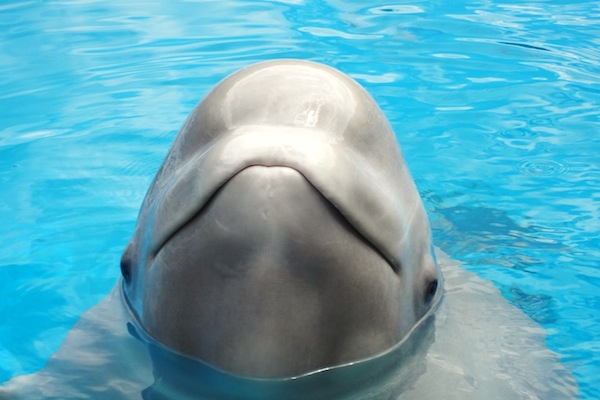 They are ready to mate when they are from 7 to 9 years of age. While mating can occur any time of the year for the Beluga Whale, the majority of it occurs from February until may. Some experts believe that this whale species may have delayed implantation but that hasn’t been confirmed. It takes from 12 to 15 month after mating for the offspring to be born.

Females typically have 1 calf every 3 years. The young can be up to 5 feet long and weigh up to 180 pounds at birth. They will stay with their mother for about 2 years. The average lifespan is about 32 years for females and 40 years for males. Early death is often the result of various predators or being trapped under ice and not able to get air.

Both Killer Whales and Polar Bears are natural threats to this whale species. As their other resources of prey diminish, they tend to consume more Beluga Whales. In the past, hunting by humans has been an issue. However, it doesn’t seem to be a huge threat currently. Changes in climate and loss of habitat are the biggest threats to them right now. At this time, the Beluga Whale is categorized as near threatened by IUCN.