The bear social structure is one that is very simplistic due to the fact that almost all of the bears out there are solitary in nature. The exception is when they are mating or when mothers are caring for their young. There is a type of bear, the sloth bear, which work as a group. They walk a pair of adults with their cubs. In those scenarios you have a dominant male and a female and they all work together to care for the young.

Bear males are very territorial, and they will often mark their area with their scent. They want to make sure all other males in the area know about their existence. From time to time males will challenge each other in order to get the right to food or a given location. These battles can be very intense and even end with one of them dying.

In other instances, the load roar of larger bears can scare away younger ones that aren’t as strong. They don’t want to engage in a battle that they know they won’t be able to win. They will continue on their way, calling and moaning as they go. They will be in search of any given territory that a male hasn’t taken over so that they can claim it as their own.

The females are more tolerant of each other, and can often be seen gathering in the same given areas for food and for water. Their home range will often overlap that of males but it doesn’t seem to be such a problem. The males are the ones to initiate contact when it is time to mate. They will pick up on the heavier scents of the females. 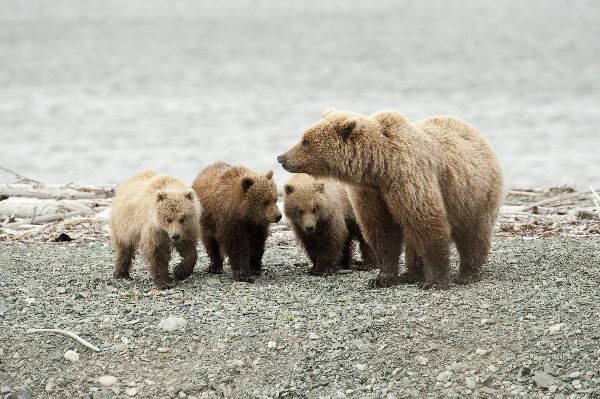 While the males may fight with each other for the right to mate, the females often don’t have much choice in the matter. They will be injured or killed by the males if they refuse to take part in the mating process. The males are also in charge of the courting process. They will nuzzle up to the females as well as engage in various types of touching. If she responds positively the physical touching will continue to be performed.

The females seem to be very passionate about caring for their young. They will put their own lives at risk in order to protect them from other bears, predators and from humans. It is amazing to see the amount of social interaction that takes place among a mother bear and her young. She seems to always be patient, willing to guide them, cuddles with them, plays with them, and ensures they get their needs met if possible.

If food is in short supply the mothers will feed the cub with the best possibilities to survive and she will abandon or left the other to starve. This can be seen with Polar bears where food shortages are common and long distances have to be walked before finding food.

The cubs will get attention from their mothers while they get independent. She will do all she can to help them be strong and to prepare them for their life on their own in the future.

Researchers have spent a great deal of time evaluating the social structure of bears. It is one that doesn’t have very much going on in it that can’t be explained. It is believed that they are highly intelligent animals that are able to process information on a high level.