Due to the size of bears and their strength, they don’t have to worry too much about predators in the wild. Occasionally when they are trying to take down prey such as a moose or a large deer they can get kicked hard enough to injure or kill them. This is extremely rare though. Cougars are a danger to the cubs.

Bears can often end up being their own enemies though. Males are extremely territorial so they don’t like the idea of another male in their home range. Yet other males may be doing so in search of food or to reach females they wish to mate with. Young males that have recently parted from their mothers are struggling to find a home range that they can call their own.

Regardless of the reason why they meet up, these confrontations among the male bears can turn physical. This can result in one of them dying and one or both of them being severely injured. The level of aggression often depends on the age of the bears as well as the species. Males will also kill small females sometimes if she won’t mate when they would like to.

Male bears are often found going after young offspring. They find them to be a threat to their own mating rights. They also know a female is going to be more likely to mate with him if she doesn’t have young cubs to take care of. Females can be very aggressive and even win battles with the males when she is protecting her cubs. A high percentage of them do get killed though as do their young ones by a powerful male. 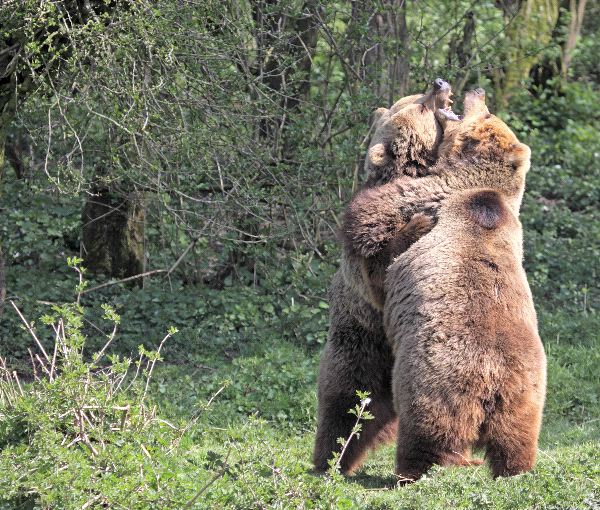 Man is the biggest threat of all though that bears have to worry about. For centuries these predators have continued to hunt them for a variety of reasons. Early mankind hunted the bear in order to have food to eat. They also used their fur for clothing and to build shelter. In some cultures body parts of the bears were ground down to make medicines, a tradition that remains part of the Chinese and Japanese cultures today.

The idea of hunting for sport is common as well. The thrill of killing a huge bear that weights hundreds of pounds is simply to exciting for many to pass up. The qualities of the tools we have today have improved a great deal, giving the predators the upper hand. They have devices to help them track the bears and also weapons that they can use from far away to kill them without putting themselves at risk of bodily harm in the process.

Hunting is sometimes considered a necessity when it comes to bears as well. For land developers being able to wipe them out of a given area means they can build homes, a golf course, or other entity on that property. They can do so without the risk of bears coming to look around or the possibility of them attacking humans.

There is money to be made by trapping bears and selling them too. Most of the time it is the young offspring that are taken. These small animals can be sold for high dollar on the black market. They may be trained to perform a variety of acts that draw attention. Others become pets for those that desire something more exotic than the average dog or cat.
As a result of the various types of predators that the bears face, their numbers have become much less than in the past. For several of these species the numbers are low enough to place them on the list of vulnerable or endangered animals. Since humans are the biggest part of this particular problem we need to take responsibility for it. We need to find a way to live in harmony with the bears.