What do Bears Eat?

Bears are animal that eat a great volume of food on a daily basis. Most of them consume both plants and animals.

Bears are considered opportunistic omnivores; therefore what a given bear will consume really depends on where they live. For example Polar Bears are only meat eaters due to the fact that they don’t have access to plant life there. The diet for them is mainly seals.

Fruits and nuts are the most common type of food that bears eat. The fruits are often seasonal and these animals quickly learn what they can find during a given time of the year. In fact, the pattern of movement within a home range will often be generated depending on the food supply that is available at different periods of times. Bears don’t mind spending a great deal of time taking small berries of trees either.

Plants, leaves, and even tree bark are often consumed by bears as well. There are plenty of nutrients found in them. For bears that live in trees these types of items are a larger part of the diet because they are plentiful and immediately available to them.

Termites and ants are common types of small prey that they will consume. For Asian bear species which live in areas where there is high humidity termites are all over. Bears can beat thousands of them at one time without thinking twice about it.

Bears that live close to water in the form of a lake or river consume fish. Salmon is the most popular type that they will consume. They don’t get them with their mouths though. Instead bears use their claws to capture them in the water. They can eat the immediately and continue to find more. They often seem like they are playing with the fish they capture though before they consume them. 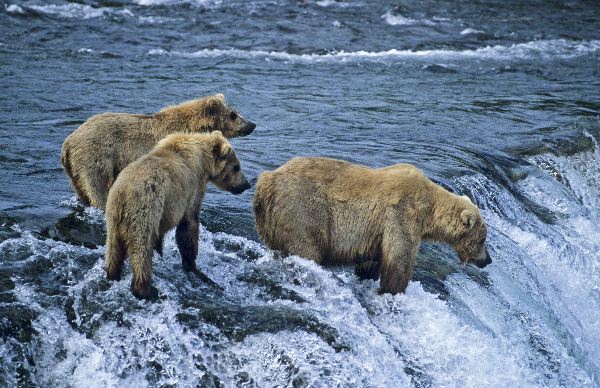 Grizzly With Her Twin Cubs Waiting For Migrating Salmon

Hunting for prey is something that most bears do. They may look for small rodents or animals. However, you don’t want to underestimate what they will consume. They have also been known to hunt for elk, deer, and moose in some regions.

Don’t dismiss consuming sweets either when it comes to bears. If they can get their hands on sugarcane, yams, or honey they will do so in very large amounts. What they will be able to consume though depends on the time of the year and where they happen to live.

All bears tend to eat a very large amount of food. They will consume more than they need too during many parts of the year. A bear is able to store up a great deal of fat when food is plentiful. For those that will be hibernating in the winter, they need to have enough fat to get through that period of time without any problems. 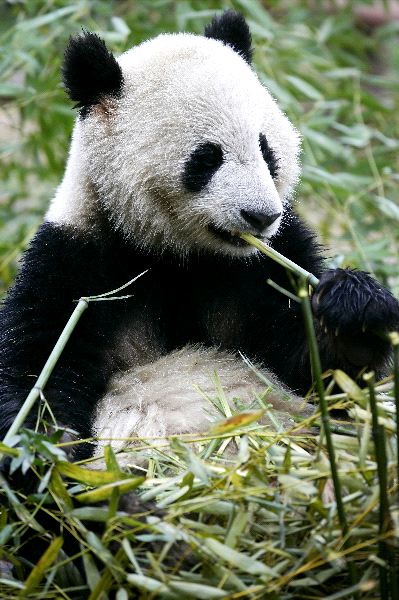 In colder areas if they don’t hibernate they are still going to find that food is much harder to find. The fat reserves make it possible for them to live until the warmer weather and more food are in place. Not all bears hibernate though and so they will continue to look for food all year long.

When the natural environment of bears is taken away it can become extremely difficult for them to find enough food. This can increase the likelihood of them getting into picnic foods or trash cans. They are going to do all they can in order to survive. When there isn’t enough food bears can die due to not getting enough nutrition. They also can’t hibernate if they don’t have enough fat stored up to last them those long months.