The sounds produced by bears can be exciting as well as scary when you hear them in the wild. These types of vocalizations allow them to communicate with each other in their surroundings. There has been a great deal of research involved with trying to determine what all of the different sounds mean.

A researcher named Gary Brown, has identified up to 11 different sound produced by bears. Grunts that are deep and low as well as clicking sounds are very common. These are generally used by the mothers in order to effectively communicate with her cubs. She has a great deal to teach them in the span of time they spend with her. Sometimes her vocalizations are encouraging and playful. Other times they are to reprimand the young for wondering off or some other thing she isn’t content with.

Moaning may be heard from bears, and some people take that as a sign of mild warnings to potential threats or in fear. However, this is a natural sound that can also mean contentment for them. A female often moans to remind the young to not wonder very far from her. Barking isn’t a sound that you may have realized bears offer. They tend to reserve it for when they are very excited, alarm or to give away the animal´s position.

Huffing can be exhibited during periods of courting before mating takes place. It can offer a couple a chance to read each other and to decide if the female is going to allow the male to mate with her or not. Also it is attributed to mothers when they want to warn her cubs of danger.

Loud roars are used as warnings for bears, and when you hear them you want to get out of the area. These roars can be their way of telling humans, other bears, and other animals that they are scared and that they want to protect their territory. Antagonizing a bear with this type of communication in place is asking for trouble.

Growling is produced as strong warning to potential threats or in anger. 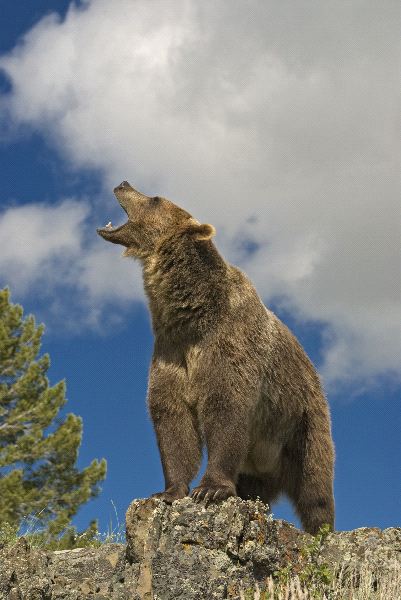 Not all bear communication is vocal in nature though. In fact, they are very effective when it comes to non verbal types of communication as well. Marking their territory with a scent is very common. This tells other bears that someone is already living in a particular area. The males are very territorial when it comes to another male entering their territory. However, it is very common for females to have a smaller area that overlaps with that of several males.

Bears also will mark their territory on any trees that are around. They will rub on them and claw at them. Sometimes they will even be seen biting on the bark. This is all done to ensure their presence in the area is known. If you see such signs on trees when you are in the wilderness you should be cautious as you could be invading the personal area of a bear.

You may see young cubs rolling around and wrestling with each other. This type of communication allows them to be playful and to create great relationships. It also allows them to get stronger and to learn great skills to help them in adulthood too.

There is still plenty that has to be learned about bear communication. Since most species are very solitary in their movements it can be harder to collect that data. Yet most experts believe that they have a good understanding of how bears communicate with each other. While they may not have advanced sounds or movements, they are believed to be pretty intelligent.

The depth of communications and vocalizations among bears has to do with how the mothers respond to their cubs. They can be seen being very vocal in such settings. Yet at times they won’t be in order to keep the presence of their young undetected from predators in the area.