Description of Bear Structure and Senses

The overall anatomy of a bear makes it simple enough to identify out there. Some of them are only about 66 pounds, like a male Sun bear, a male Polar bear can reach up to 1,500 pounds.

Standing up, bears can range in height from 4 feet to 10 feet. This would be the case for a smallest male Sun bear, for the first and the largest male Kodiak or Polar bear for the later. The males of each species are taller and heavier than the females. Even though there are many differences based upon the species there is a basic design with the bear anatomy.

Bears have powerful bodies that are very thick in the middle. This is due to the fact that most of them have to consume volumes of food when it is plentiful in order to store it up for the winter months. Those layers of fat also help to regulate their temperatures. Bears have thick fur that covers their bodies. This helps to keep them warm as well as to prevent insects from penetrating the skin.

The claws of a bear are very sharp, and they will range in size. They often use these claws to capture prey and to climb trees. These claws are also retractable so they can get them out when they need them. The nose of bears may be small but they are very powerful. They can smell for miles around them.

They usually walk on all fours due to their size. However, bears can all stand upright and they can walk at a much slower pace on their hind legs. Standing up though is a sign of aggression and so one needs to be very cautious when a bear is seen in such a stance. They usually get in this position to intimidate the danger they are facing.

All bears walk on the soles of their feet rather than on the toes. This is a feature of their anatomy that stands them apart from all other carnivores. As they walk the weight of the body is continually shifted towards the back. This is why even the large species can often run at a speed of about 35 miles per hour for a short period of time. 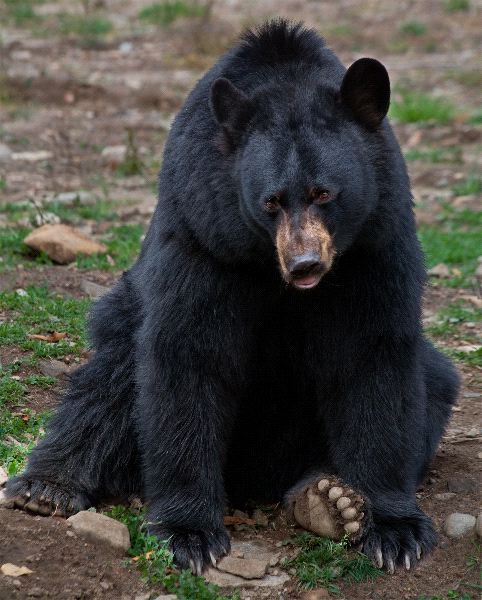 Even though bears eat meat, they also consume very large amounts of plant life. That is why their teeth aren’t as sharp of those such as felines and canines that live in the wild. They do have some very large canine teeth though. They also have molars that are flat. You will notice that the head size is very large on any species of bear. Bears have small eyes and small ears, yet they have a vision similar to humans. Their noses are designed to pick up scents a long way off too.

The digestive system of a bear is designed to be able to break down a variety of different types of foods. Since they eat both plants and animals they are able to get the right balance of nutrients that they need. What they eat though will determine the way in which the body ends up processing it. For example the grasses they consume go through the small intestine from the gut.

The problem though is that only a part of what they eat is actually going to be digested by the body. That is why these animals have to continually eat very large amounts of food in order to store fat and to remain healthy.

The overall anatomy of a bear is designed to help it survive in a given environment. Through the evolution process they have developed exactly what they need in order to be able to thrive in given conditions. This is why the general anatomy of bears is the same but the different species have significant differences as well.