There are plenty of interesting things to learn about the Basking Shark, starting with the fact that it is the second largest of all fish in the world. Only the Whale Shark is larger than it is.  Due to the large size, it moves very slowly to help conserve energy. It is harmless to humans and no attacks have ever been reported by this species of shark. The name comes from the fact that they are often at the surface of the water and appear to be just basking there. Even though they have been well observed, there is still plenty we don’t know about them.

Featuring a grayish and brown coloring, the Basking Shark is easily identifiable. It often gives the appearance that it is in a molten state.  The tail is very strong and it is wide with a shape that is crescent looking. They have very small teeth with hundreds of them featured in each row. The teeth are curved back on the top and the lower jaws. The teeth continue to be replaced over time as they need to be for the duration of the life of the shark.

This species of shark features a cone shaped snout and it also has gills that are all around the head. The Basking Shark can vary by location in size but there are some averages that have been noted. They can range in length from 26 to 35 feet. They can also weigh up to 19 tons!

The skin of the body is very textured with scales and a layer of mucus. This helps to keep them well protected from parasites and the sun. You will notice that their bodies do look scarred which is often due to their encounters with the Cookiecutter Sharks. They are very buoyant in spite of their large size. This is due to their liver being about ¼ of the overall body weight. This also helps them with being able to store energy.

It is believed that the process of commercial fishing has resulted in many of the larger ones disappearing from the water at a rapid rate. A lack of enough food in many locations has also caused a drop in their numbers. Increased pollution may also be contributing to disease and parasite problems for the Basking Shark. 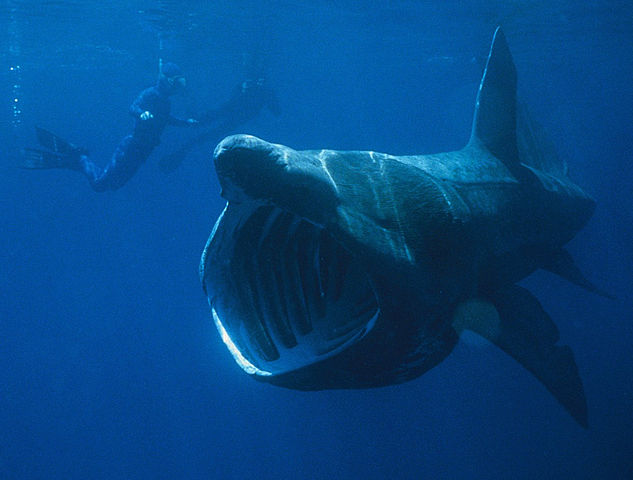 This particular species of shark is migrational and you will find them living in oceans around the world. They seem to do just fine in various temperatures though so the migration seems to have more to do with food resources and mating. The number of them continues to drop due to commercial exploitation for fins, liver oil, and food.

In many locations they are no longer found and if conservation efforts aren’t improved they could be in grave danger of survival. They have also been identified in some new regions over the past decade. It is believe this type of migrational moment has to do with humans increasingly sharing their habitat and the quest to find enough food for survival.

You will find Basking Sharks living either alone or in small schools. It isn’t fully understood why they have such a difference in behavior as they seem to thrive both alone and in groups. They are highly migrational and in the winter months they will be harder to find as they go to the deeper parts of the water to find food.

When they are seen swimming in circles, it is believed that this is to get the attention of females for mating. They may spend hours with this particular behavior in order to get noticed. They tend to be very patient when it comes to attracting a mate. 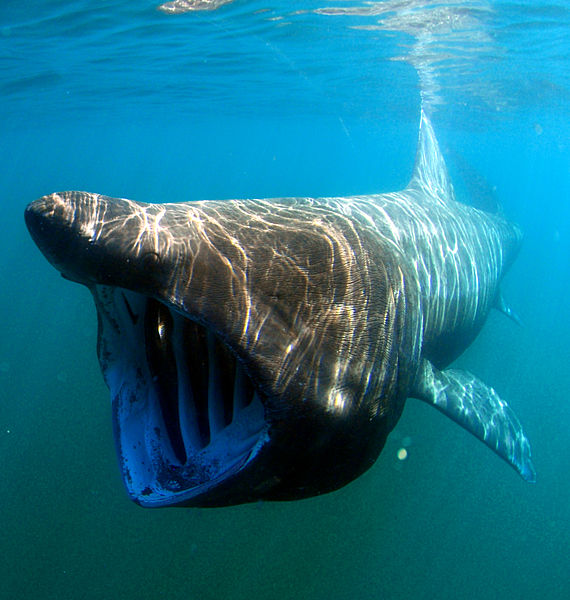 The volume of food that a Basking Shark needs to consume daily is phenomenal! They are filter feeders with gill rakers that are very sophisticated. This allows them to remove water and debris and to keep the food sources that they find as they slowly graze through the water. One difference over other filter feeders is that they do have the gills around the top and bottom of the head. The majority of their food consumed is small plankton.

The young embryos develop in a sac inside of the female, but they aren’t attached to a placenta. It is believed that the females can delay gestation so that they may remain pregnant from 1 to 3 years. Mating occurs in the early summer and the female often moves to very shallow water when ready for the young to be born. She may have up to 6 pups that are mover 6 feet long at birth.  The age of maturity is from 6 to 13 years but often has to do more with size than age. Typically, mating can occur around 15 to 20 feet in length.