What Are Baboons And What Do They Look Like?

Baboons are Old world monkeys and are native to Africa and Arab countries also. These are quite large animals though, they only have 2 other primates which are bigger than them and those are the drill and mandrill primates. They can range in size however because they can be any size from 20 inches to 47 inches; and they can weigh anywhere from 30 pounds to 90 pounds.

All of the baboons will have dog like muzzles which are long and will have very powerful and heavy jaws.  Their teeth are very sharp and their eyes are very close set also; but they will have thicker fur on all of their bodies apart from their tails, muzzles, and its bottom.  Their fur can range from brown to yellow and sometimes they can have black or olive to grey fur also.

They are tremendously big animals and are very strong also.  They are amazing animals to view however and they are beautiful.  These animals are going to love very beautiful whenever anyone sees them.

The Habitat of Baboons

Most baboons love savannah type areas; though on occasion, some baboons can do live in some tropical forests and areas.  It can depend on the exact type of baboon as there are five different types of baboons. For example, the olive baboon lives in the Sahelian woodland areas and love forest habitats also. Whereas the yellow baboons live in Kenya’s coastal lines and Zimbabwe.  They can vary from different types of species.

The Behavior of Baboons

Baboons are very much ground dwelling animals and can be found in most open savannah areas.  They do love open woodland and hills all across Africa but their diets are fairly good also because they can eat a variety of things. They can eat things such as insects and sometimes hares, birds, fish, and sometimes other monkeys such as vervet monkeys.

These primates are going to be forgers and they love to forage throughout the day and even the night.  Sometimes the baboons are going to even get close to human areas and there have been some occasions when the baboons have been known to prey on goats and sheep.  This can be a huge problem for many farmers and livestock owners. 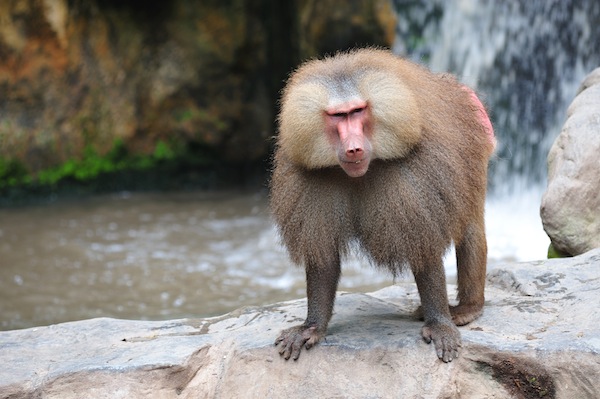 Though, when it comes to the communication process from these animals, can be very confusing. Baboons can be very vocal and like to be very vocal also; and they do like to communicate by being vocal.  This can include grunts, barks, yakking, clicking and roaring to others and they can at times seem to be very threatening but this isn’t always the case.

They can use lip smacking and other facial expressions to communicate with other baboons.  However, they do like to warn their predators off especially when it comes to keeping their young safe.

What Do Baboons Eat?

A baboon can eat a lot of different things.  They love crops and can be a very troublesome for many different farmers because they love to get to the crops and try to actually dig some of the crops up.  They can also eat grass, bark, roots, seeds, fruit and even some meats; and they have been known to eat some larger mammals young.  They can eat birds and rodents.

How Do Baboons Mate?

The baboons mate but their behavior during their mating rituals are going to vary because of where they live and in which sort of environment they live in.  Sometimes, if a structure of a troop is awash with a mix of females and males, then the mating rituals will be very different from troops which are one male and dozens of females.

If the male is considered to be high in ranking over another male, he will mate first with a female of his choice. It could all determine on the male ranking when they wish to mate.  Usually most males will be able to mate with any female within the group and some fights have been known to break out. There are usually fights during the mating season but for most of the times, it isn’t too serious.

In some mixed groups, males are going to try to win the friendship of the females.  Males will help to groom the females and make them feel ‘special’ in other words; and they will even help to care for any young they might have also and will help to get food for the females also. If males do all of these things, the females are more than likely to mate with them because they do want a mate who will be able to provide for them and their young.

Most of the females are going to choose the males which are friendly than aggressive.  However, some of the males out there will take the females young in order to protect them from fights because many don’t want to hurt the young as this will put off other females to mate with them.  Though, when a female is ready to mate, her rump will swell up and present this to the male who is looking to mate with them.

The females will give birth to one young, but this is only after a 6 month gestation period.  Most of the young baboons will weigh around 400 grams which is quite small for a baboon; and will have black epidermis.  Most of the females are going to be the one looking after the young and some females will join in and help to raise the young but the males do not usually take an interest in raising the children.  Children will be weaned after about a year; and will be mature at 5-8 years old.

The mating season can be dangerous however and for many of these animals, they do fight.  For most, they won’t get into a lot of trouble with fighting but they can always hurt other baboons seriously.  This is because males can wish to mate with the same female and as a result will try to do anything to get their attention, even fight.  If some male wins the fight, they will have the right to mate with the female if she so chooses. 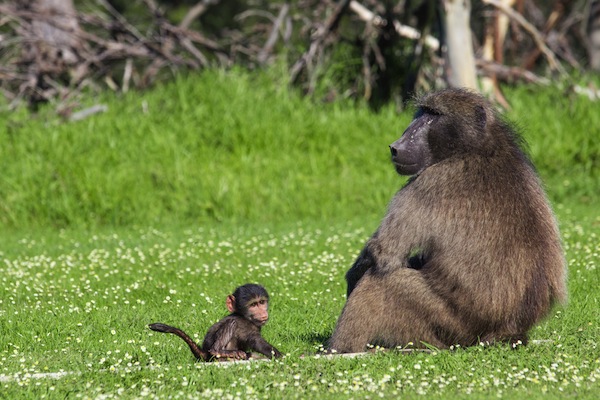 Male baboon and his baby offspring

When it comes to baboons relationships with humans, it isn’t the worst possible state.  Most baboons don’t interact with humans but in ancient times, the baboons were considered to be a scared animal. Even today they are Least Concern but there are few of these primates available in the world. Many have been hunted and many have lost their homes due to humans living near their habitat and removing some of their forestation. These are some of the world’s best primates but they are considered to be endangered because they are being hunted more and more.

For many of these animals, they have been hurt and killed by poachers. Though, there are many reservations that have been set up to help keep these animals safe and zoos are helping to keep a breeding program so that these animals can be put back into the wild.