The Australian Green Tree Frog is a neon green color and one of the species of frogs that gets plenty of attention. The adult size of this frog is about 4 inches. The skin of this particular frog has been very useful for modern medicine. It excretes both anti bacterial and anti viral properties that can be used to help people with a variety of health concerns.

While the name of it gives the indication that it is always green, that is false. The color of it can change based on its surroundings so that it can blend in. They may be brown at times and green at others. When they are brown though they are often mistaken for being another species of frog. Sometimes they will be both green and brown at the same time. They have very large eyes that allow them to see well at night.

Australia and New Guinea are the locations where the Australian Green Tree Frog is native. However, there are other locations where it is found today due to human introduction including New Zealand. This is considered to be an exotic type of pet on the market so they are sold for high fees to locations around the world.

They thrive in locations that are warm and moist. This is why Florida in the USA is a place where they have been found too. It is believed they escaped or were released as part of the black market pet trade. However, in Florida they are considered to be evasive and a nuisance. 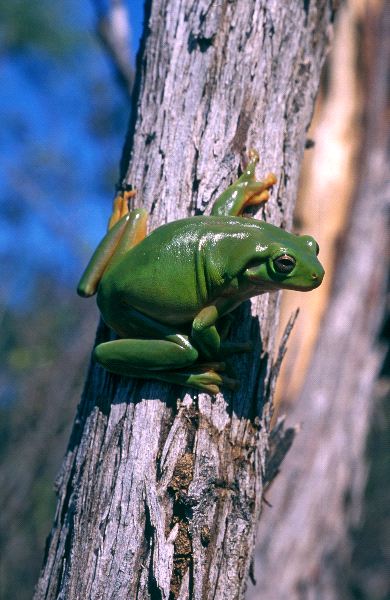 They don’t seem to be afraid of humans and it is common for them to be found around homes and other dwellings. The noises that this particular frog can make are very interesting. When someone touches it they will squeak but they aren’t feeling any pain or afraid. When they feel that they may be in danger they will scream to scare of what is around them.

They are often found around lit areas because those are places that will attract various types of bugs and insects to them. The Australian Green Tree Frog is a very patient hunter with a big appetite. They are nocturnal so they rest during the day and come out at night to hunt for food.

Insects and spiders make up the majority of the diet for the Australian Green Tree Frog. Sometimes they will consume small mammals or even small species of other frogs. They do have teeth but they aren’t sharp enough to take bites out of prey. They have to consume food that they are able to swallow whole. They are opportunistic and will feed as much as they can when they can. They help to reduce the volume of insects in many locations.

Mating usually follows the heavy rain season where they will have an abundance of food to consume. It isn’t really known what draws them to each other. After mating the male and female will go their separate ways. A few months later the female will lay up to 300 very small eggs.

The will attach to the roots of plants in the water. It takes about a month for the young embryos to come out. They will stay attached to the plants for a couple of more months before they are tadpoles that can swim away. Less than half of them will survive long enough to become actual frogs. Young frogs mature in about two years.

The average lifespan for the Australian Green Tree Frog is 16 years in captivity. 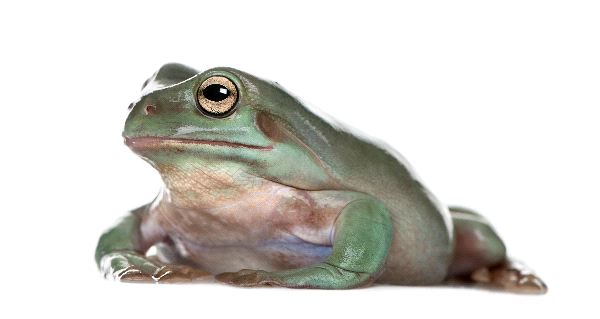