The Atlantic Puffin is a sea bird that is considered to be very cute. Many people think they look like the Penguin. They are about 11 to 13 inches long and they can have a wingspan up to 24 inches. The under side of the wings are gray and you can only see this when they are in flight.

The Atlantic Puffin has a black body with a white front. They have gray on the cheeks and around the eyes. They have orange legs and a bill that is triangle in shape. That is usually orange with some blue and yellow in it. They are powerful birds with strong legs and very good vision. They have webbed feet that help them when they are in the water.

You will find the Atlantic Puffin in North America, Iceland, and the Arctic Circle. Northern France and Maine are two of the locations with the highest populations of them. They spend their winter months as far south as they can, often to the Mediterranean and to North Carolina for others.

They do seem to have a very good population at this point in time. However, there have been some shifts in where they place their nests. This has to do with many people starting to live closer to those locations. The threats from domestic dogs and cats to them is very high so they often avoid such areas.

The Atlantic Puffin often make a very soft sound similar to purring when they are in flight. That is the only time they are known to be vocal. They can live in very large colonies that have pairs. They have a hierarchy within that colony that helps them to maintain order.

This bird is very curious and they will go exploring their environment. They can be aggressive within their colonies or when they feel there is some type of outside threat to them. They are very good with the young and often work together to protect them. 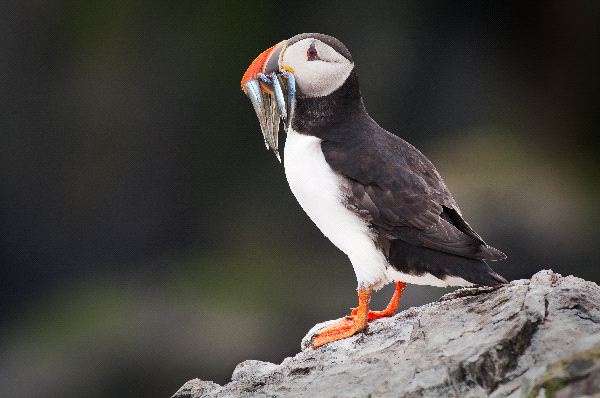 The Atlantic Puffin uses their powerful wings for diving so that they can get into the water fast. They can see fish and crustaceans from high above the water. Then they dive down and catch those food items with their bill. This is a very swift action that they will do over and over again.

Between the age of 4 and 5 they will be mature enough for mating. The pairs often find a mate and keep it for life. They will both take part in creating a nest for their young eggs. They often have the nests on the ground and that can be tough to protect those eggs from various land predators. They use seaweed and twigs to make the nest. The only time they are on land is for making a nest. They do their actual mating in the water.

Only one egg is created per couple so they do all they can to protect it. They will take turns at the nest incubating it. About 42 days later they will see the young chick arrive. The parents will bring it food for about a month and then it is time for it to leave the nest. However, as the chick heads to the sea the parents will follow along to offer support.

One of the main things that allows the males to be drawn to females is the development of the bright orange on the bill. One of the rituals that they will take part in while finding a mate has to do with tapping their bills with each other.