Atlantic Bluefin Tuna is considered to be one of the fastest and the largest fish in the world. They can weigh up to 150 pounds but it will depend on where they live and what they are able to feed upon. They are considered to be a great tasting fish and that is why they are part of various recipes and even dishes in restaurants.

This fish has a body shaped like a torpedo. That aids them with speed and with endurance. They are very colorful with various colors of silver, blue, and even reds. While they have both dorsal and pectoral fins, they can be retracted. This is one of the reasons why they have more speed than most fish.

They have a complex system of thermal regulation that allows them to stay warm even in very cool waters. Without that they would lose the use of various muscle functions when they got too cold. They only rely on this system when they need it though due to the energy it uses. When they are in warmer waters they will be able to survive without having to use it.

The Atlantic Bluefin Tuna can live in very warm tropical waters as well as those that quite cold around Newfoundland. They tend to migrate for spawning and they can move very long distances. Sometimes they will do so several times a year. They tend to move when they must to find habitat and to ensure they can find enough food.

Since they have high endurance and they are fast, they may travel for long distances every single day to find food. This has helped them to adapt in areas where there isn’t nearly as much food as they are used to. They do have to be careful though about burning up too much energy.

Instinctively the Atlantic Bluefin Tuna does all it can to be able to survive. They are very aggressive and they will take on territory that other fish have been feeding from. They will move in as a group and that gives them the upper hand due to their speed and their size. Most of the time other types of fish have no choice but to seek shelter and food elsewhere if they want to survive. 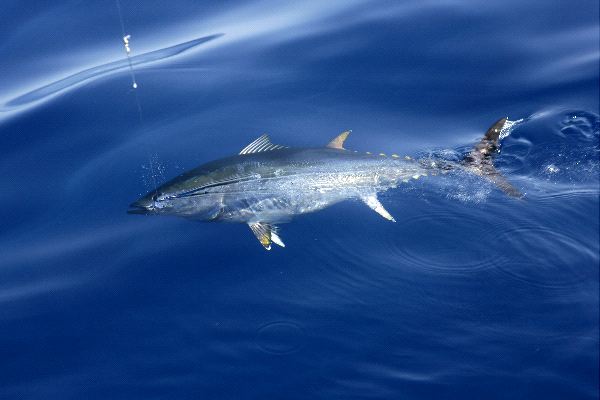 The Atlantic Bluefin Tuna has a huge appetite and they will feed as often as they can. They have a very diverse diet. They will consume small fish, squid, eels, and crustaceans. They will eat and eat when they can and often gorge themselves to the point of barely being able to move.

For spawning there are extremely large groups of Atlantic Bluefin Tuna. This is a very dangerous time for them due to commercial fishing networks. They use boats and even aircraft to identify where those spawning groups are. Then they can capture these fish and yield a huge pay off by selling them.

The females can product up to 30 million eggs annually. Less than 1% of them though will actually be able to create young fish from them. The others will all become food sources to various predators.

Due to the delicious taste of the Atlantic Bluefin Tuna they have been heavily caught in many locations. As a result is illegal to commercially fish them in various areas to help them increase in numbers. Due to the high demand though for this type of fish and the money people will pay for it, illegal hunting of the Atlantic Bluefin Tuna continues to be a very serious problem.