The Atlantic Blue Marlin is an amazing creature that lives in temperate waters. It is often commercial hunted due to the fact that the meat is very tasty to many people. Sometimes they are caught by accident by those that are fishing. Due to them being close to the surface of the water they can sometimes be injured or killed by passing boats.

The overall size of the Atlantic Blue Marlin can vary quite a bit based on location. They can weigh from 1,000 to 2,000 pounds. The females are often 3 or 4 times larger than the males when they are fully mature. The bill is very long and thin but it is also very powerful for helping them to get food.

The body has 24 vertebrae and it is created to allow them to swim fast and easily without using very much energy to do so. The upper part of the body is a dark blue color. Underneath is a white or cream color. They have a long tail that helps them to navigate in the water.

As you may have guessed, the Atlantic Blue Marlin is named after its location – the Atlantic Ocean. They spend most of their life away from land and into the deeper locations of the sea. However, they tend to stay at the top of it so they are a common site in these waters.

They prefer water that is warm and they do take part in seasonal migrations. They have been found down around the Virgin Islands, Africa, and the Bahamas. In many locations they have become a very popular tourist attraction.

It isn’t uncommon to see the Atlantic Blue Marlin following closely behind boats. This is because the movements of the boats can stir up a great deal of food for them to consume. This can allow them to have entire schools of fish at their disposal without having to hunt them down. 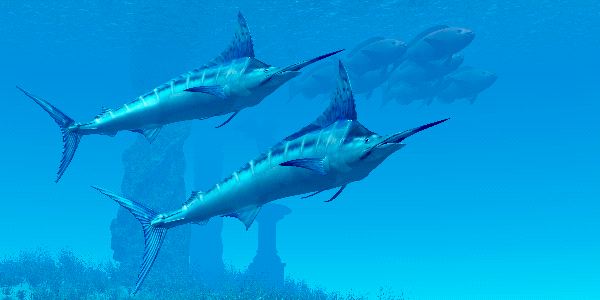 The Atlantic Blue Marlin usually consumes various types of food that is close to the surface of the water. They are very powerful creatures and use their bill to be able to kill large amounts of prey. They can then consume it at their leisure. They may get their fill and come back for more later. Yet there is always the chance that some other predator has already consumed it.

Females are mature for mating at 120kg or below and for males it occurs when they are about 3 years old. Maturity often has to do more with size though than with their age. The late summer and early fall are the mating times for the Atlantic Blue Marlin. Females may spawn up to 4 times per season though.

They can release up to 7 million eggs per season (a female at 124 kg). However, less than 1% of them will ever make it to the age of maturity. These eggs offer a huge feeding source for the various forms of aquatic life out there. The average lifespan is 27 years for females and 18 for males, but depends on the living conditions.

Man seems to be the only real predator of the Atlantic Blue Marlin. They have been caught intentionally and sometimes they just get caught up in the net or other equipment for other types of aquatic life. They can become very ill due to various pollutants in the water so that is a factor to consider if you want to help them to thrive.