The Atlantic Blue Crab is a very interesting form of aquatic life. They can be completely dark blue in color. However, they can also be tan with areas of blue on them. This is one type of Crab that many people don’t bother to eat. There is a very complex method involved with removing the meat that is just too time consuming for most to bother with.

In some locations though they are considered to be a delicacy so there is a commercial fishing market for them. When they are heated to cook though the blue will disappear and they will become a shade of red.

They can grow to be up to 9 inches in length. The Atlantic Blue Crab displays more frontal teeth that other species of Crab. The males have a long and slender waist but the females have one that is rounder. The amount of blue that they will display depends on various pigments that are found in the shell.

The Atlantic Ocean is where you will find the Atlantic Blue Crab in the largest numbers. They are also found in smaller numbers around the Gulf of Mexico and the Pacific Ocean. It has been introduced to the waters around Japan and Nova Scotia. The results seem to be very good and they continue to be found in locations that they normally wouldn’t have survived in.

They can live in clean water, dirty water, saltwater, or freshwater. It is believed that such diversity is part of the reason why they have been able to survive for so long. It is possible that the Atlantic Blue Crab has been around for more than 1 million years.

After mating the Atlantic Blue Crab will take part in migration. This is part of what has made the Chesapeake Bay so popular. Many people will come to this area to simply be able to see this amazing blue coloring in the water as the females are migrating that distance. 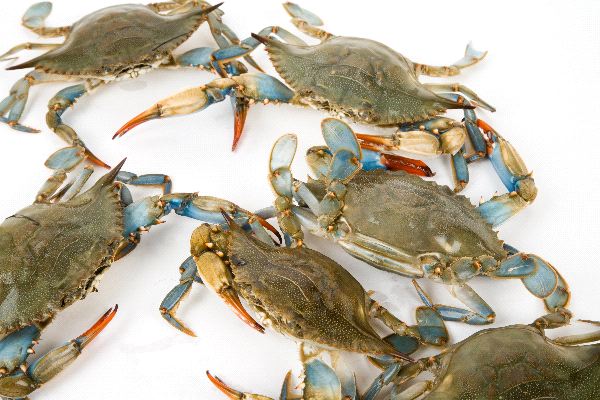 The Atlantic Blue Crab is considered to be an omnivore as they eat both plants and meat. They consume light shelled forms in the water, small fish, and plants. They also consume carrion that they can find. They aren’t picky when it comes to making sure they get enough food. They have been noted to consume other Crabs too. In many locations they have been brought in to combat problems with the invasive Green Crab.

They are mature when they are about 1 year of age. The females will have a long journey of migration after mating. The sperm from the male will be stored in her body until she reaches her destination for placing the eggs. Then they will be fertilized and on display as a type of larvae. In about 4 weeks they will emerge and then be able to swim back to the bay areas.

Only a small fraction of the young make it to maturity though. During that swim back to the bay they are often consumed by other living things in the water. They also get caught up in fishing nets that can cause many of them to drown.

While the numbers of Atlantic Blue Crab are quite a bit less than in the past decades, they aren’t seen as being in a state of concern. There aren’t any real conservation efforts in place for them at this point in time. Pollution, loss of habitat, and the increased number of certain predators all play a role in the lower numbers.