The elephant is one of the best-recognised animals in the world. Known for being large, gentle, friendly and intelligent, elephants are the favourite animal of millions – and they live up to their reputation. They have amongst the most highly-developed brains in the animal kingdom, and are as capable at making and using tools as any great ape. There have been elephants capable of mimicking human speech, elephants that have saved their keeper’s lives, and elephants who have taken revenge on their abusers decades after the fact – we as humans are deeply drawn to these fascinating creatures, and this has been the case for many hundreds of years.

This is only enhanced by the fact that it’s actually very easy to tame and train an elephant. By and large, they like humans; they’re happy to make friends, and they can be persuaded to learn tricks, take direction and work under instruction. A well-trained elephant is a remarkably gentle and tender creature, safe to interact even with small children and the frail or infirm without undue risk. Thanks to this, elephants have taken numerous roles in society over the centuries – as modes of transport, as siege platforms and barrage weapons, as circus performers and trained animals, as status symbols of wealth and plenty, and simply as beloved personal pets.

Elephants of all types are undeniably large creatures – although Asian elephants tend to be a little smaller than African elephants on average, with much more compact ears. The forehead of the Asian elephant features two hemispherical bulges that are not present in African elephants, and they possess several fundamental biological differences that prove them to belong to separate genii, although they of course share a taxonomical family.

Their feet have ‘toenails’ far more clearly than the feet of the African elephant – four on each hindfoot and five on each forefoot. This is likely because they use their feet far more than their relatives do; they’re remarkably agile with their feet, and use them in conjunction with the tusks to manipulate objects.

Usually, only males have tusks – and even then, some bulls do lack them. Female tusked Asian elephants are rare, and if tusks are present they’re usually very small. The tusks of Asian elephants are large, sharp, heavy and faintly terrifying – but they’re mostly used as tools and for manipulation, with goring being remarkably rare.

Asian elephants have thick, wrinkled, sensitive, flexible skin that is much smoother than the skin of an African elephant. The skin is almost always grey, though depigmentation is relatively common – particularly on the trunk, ears or neck. 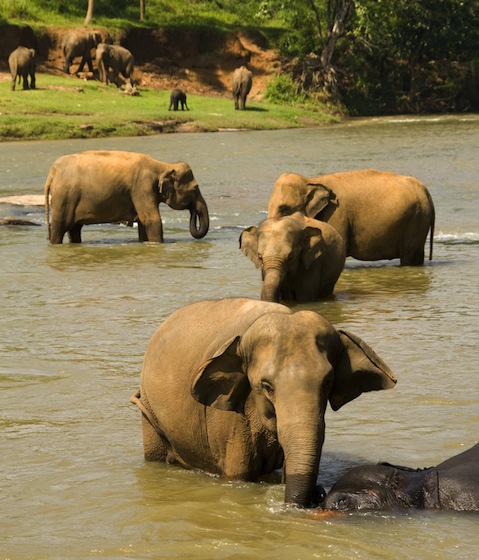 Asian elephants live in southeast Asia, their habitat spanning from India to the west through to Borneo in the east. There are three recognised subspecies; one in Sri Lanka, one in mainland Asia and one in the island of Sumatra.

Within the habitats found in these places, Asian elephants are actually very diversified and adaptable. They can be found living everywhere from sea level to the 10,000ft peaks of the Himalayan Mountains, in all kinds of forest – moist or dry, evergreen or deciduous –and in various landscapes influenced by humans; cultivated forest and deprecated scrubland.

There are high numbers of elephants kept in captivity, many of which are in large free-range safari parks. There are also elephants kept in zoos, camps, farms and private estates the world over, in varying levels of comfort – insufficiently catered for, elephants in captivity have been known to go insane. This can thankfully be avoided with proper care, treatment and environment.

Elephants are ‘crepuscular’, meaning that they are at their most active at the hours of dawn and dusk. During the depths of night they sleep, and during the height of the afternoon they rest, nap and watch their calves play with each other – most of their feeding, moving and social activity takes place around twilight and daybreak when their surroundings are coolest making moving around easier.

All elephants are very social animals, but the gregarious nature of Asian elephants is less pronounced than that of their other African relatives. The most common herd size is only two or three adult females, along with any calves who are still living with them. Asian bull elephants are relatively commonly found to be solitary, and females may occasionally ‘go rogue’ and split off from their herd entirely.

It is an incredibly bad idea to startle, harass or even approach a female elephant while she is with her calves. You will be trampled, in as remarkably aggressive and impressive display of force, size and brutality – a mother elephant will do anything she can to protect her young. The rest of the time, Asian elephants are generally very gentle – with the exception of some of the so-called ‘rogues’, who may attack humans unprovoked if they have been without socialisation for too long a time period.

All elephants are good examples of what is called ‘megaherbivores’, meaning that they consume extremely large amounts of plant and tree matter. Mostly, Asian elephants eat from woody trees and shrubs – though they will also happily consume legumes, palms and other types of grasses.

In any given day, it is likely that a single adult elephant will consume 300lbs of plant matter and 200L of water – not including the mud and water they use for bathing and playing in, also on roughly a daily basis! 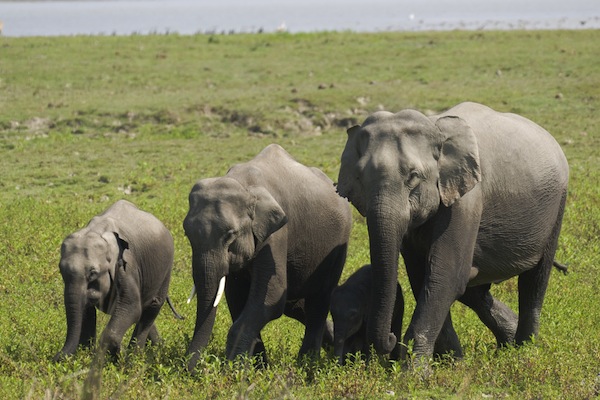 When a female comes into heat, two or more bulls may fight each other for access to her – though these are rarely particularly violent, intense or strong fights, and tend to be settled relatively quickly. Once the decision is made and the animals have copulated, but bulls go back to their own ranges and leave the female to deal with gestation without them.

Pregnancy lasts between eighteen months and two years, and usually results in a single calf – while not unheard of, multiple births are as rare amongst elephants as they are humans. A newborn elephant weighs approximately 225 lbs, and is relatively well-developed – elephants are born able to stand and walk, but grow rather slowly once they’ve left the womb. They suckle for approximately three years, and reach sexual maturity at approximately the age of thirteen.

At this point, male elephants tend to leave the maternal group or be chased off, while female elephants generally stay with their mothers, sisters, aunts and perhaps grandmothers.

The closest living relative to the elephant is the manatee. There are other closely related species to the elephant that includes the rhinoceros and the hydraxes. Sadly, today there is only two different type of living species within the elephant family. The key to making sure these two species live on is to protect their habitat and to protect them as well.