The Asian Black Bear is all black except for a white crescent shaped area in the chest region. The fur around the neck is very thick and often gives the appearance of a mane. They are medium-sized bears with the males weighing about 200-330 pounds and the females around 143-198 pounds.

These bears are found only in Asia, in countries like Korea, China, Russia and Japan. They move the mountain terrain, inhabiting deciduous forest, mixed forests and others. They can also be found in hilly regions where there are lots of trees. They tend to move to higher elevations in the colder months than they are in during the summer, reaching elevations up to 3,500 in the Himalayas during those summer months, climbing down to 1,500 m in winter.

The Asian Black Bear is able to adapt very well to a variety of changes in the natural environment. It is through these adaptations that they have been able to continue to survive. You won’t often see them though in the wild unless you know where to look.
The Asian Black Bears spend almost half of their life in trees rather than on the ground and they are one of the largest arboreal mammals.

These bears can hibernate but not all of them do. Many of them will remain awake all year long. Others sleep only for short periods of time. Experts believe the region where they live plays a role in if they will hibernate and for how long. The availability of food as well as the temperature affects their bodies and therefore determines their hibernation.

Nearly all pregnant females hibernate from November until March, taking previously the time to prepare their den during October. 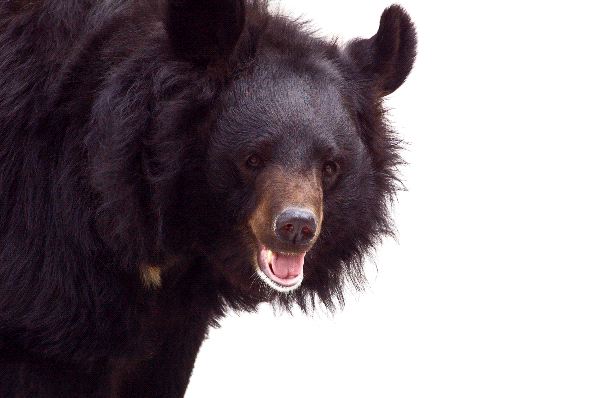 The feeding habits of the Asian Black Bear are very diverse and are considered omnivorous. They love to consume fruits, berries and nuts when they are in season. They also look for honey and carrion in the trees. Their short claws make it easy for them to open up termite mounds and enjoy a feast there. They will also consume the bark from the trees when other food sources are scarce.

Sometimes you will see these bears on the ground looking for other animals to eat. In rare occasions they were reported to include in their prey wild boars, water buffaloes and muntjacs, although is not usual. They are good hunters and can run fast for short distances. Sometimes, they will even look for dead fish.

Mating can take place from mid June to mid August for the Asian Black Bears, with a gestation period of 200-240 days. They have the ability to delay the attachment of the embryo to the uterus so that they can give birth when it is right for them. This reproductive strategy is called “Delayed Implantation” and this is why some of the offspring are born in the winter while others are born in the spring.

Two cubs are usually what will be born with each birth. The mothers will teach their cubs a great deal for the first two years of life and they will become independent at 24-36 months, when she will encourage them to go on their own.

The main predators of the Asian Black Bears are the tigers, although wolves and Asian leopards and Eurasian lynxes are also a threat, especially for young bears and cubs.

Besides those, probably humans are the main threat for Asian Black Bears.

There isn’t much in the way of conservation for these bears. By 1990s their habitat had reduced to one-fifth of the area they used to have by the beginning of the century, due to deforestation and human population.

Even though advocates for them have tried to encourage the government to put such protective orders in motion it hasn’t happened yet. The fact that many of the Chinese people like to use parts of these bears for their medicines also makes it hard to protect them.

Due to the fact that the Asian Black Bear spends most of its time in trees, it is rare that you will come face to face with one in the wild. However, there are recorded aggressive attacks to humans.

Hunting for them is more challenging than other bears. This is why many decide to take up such a challenging quest. These bears are very intelligent and in some places the young have been captured and then trained for various types of performances.