The Arapaima Fish is one that has many legends surrounding it. One of them is that it is a man eater. However, no such credibility has been given to those stories. It is one of the largest freshwater fish found in the world. They can be up to 6 ½ feet long and they can weigh around 220 pounds. There have been reports of larger ones but they can’t be confirmed. This is a common type of fish that people eat in South America.

The Arapaima Fish is shaped like a torpedo. Their bodies are black and they have reddish markings on them. They also feature large scales. The mouth is turned upwards which helps with feeding as they consume food from the surface.

South America is the location of the Arapaima Fish. They live in locations around the Amazon River basin. They are also found in tributaries all around this area. They are very common in the flood plains after the rainy season. They have a limited distribution though due to the rapid flow of water and even waterfalls. They aren’t able to navigate in such territories.

They have to come to the surface for air. They enjoy water temperatures of 75 degrees or higher. When the water is cooler they may not eat and they may not be able to survive. The Arapaima Fish is very aggressive and they are continually on the move. They don’t seem to really have a home range – they simply live where they are able to survive. 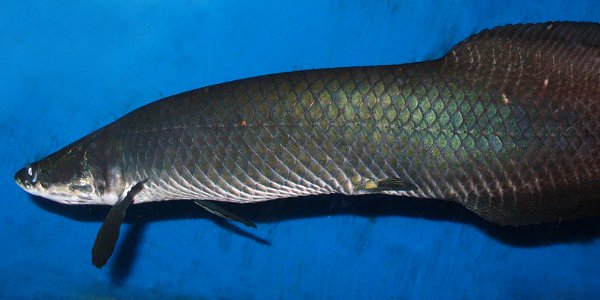 They are carnivorous predators. The majority of their diet consists of other fish. They will consume anything that they can get though. This includes small mammals and various species of birds. The mouth is turned upwards and they will feed close to the surface of the water. When birds or mammals are found there looking for their own prey they can very quickly become a meal for the Arapaima Fish.

They have a very bony tongue that allows them to get food. They also have tiny teeth that are very sharp. Most of their food is consumed whole though. They don’t use those teeth to be able to tear off pieces so what they prey on has to be small enough to swallow.

It is very hard to get information about what draws males and females to each other during mating due to where they live. It is known that the water cycle has a great deal to do with when they will lay eggs and if those eggs will survive. The lay their eggs when the water levels are low in the water.

They build a small nest in the muddy bottom area of the river. The eggs will hatch as the waters increase and flooding occurs. When there is no such flooding though the eggs won’t be able to survive. The female will circle around the area of her eggs often to help protect them from various predators.

Spawning occurs in shallow lakes, chiefly during the months of October and November. Approximately 2/3 of them will be consumed though by various predators early on. They can live in captivity for a period of time from 15 to 20 years.

Due to commercial fishing, the number of them in Brazil have been significantly reduced. The law now says that only the native people of Brazil can hunt them and use them for food. All other people have to catch and release them or they can be in trouble with the law. Even with such conservation efforts though it is going to take time for the number of them to increase. To help with the demand for this type of fish as food, there are now farms where the Arapaima Fish are raised in captivity for that purpose. 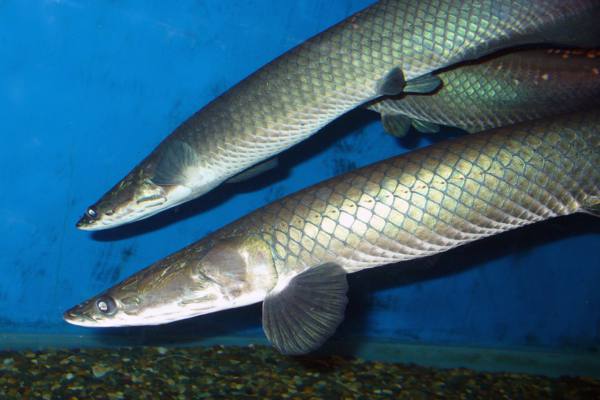